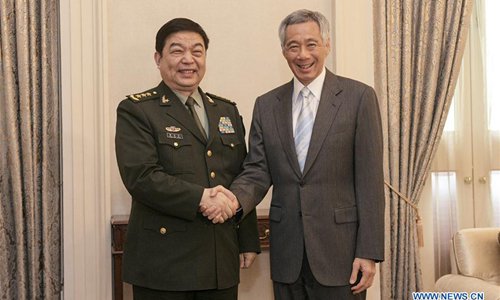 Singaporean Prime Minister Lee Hsien Loong met on Wednesday with visiting Chinese Defense Minister and State Councilor Chang Wanquan. At their meeting, Lee told the Chinese visitor that Singapore has attached importance to China's role in both regional and global affairs, firmly adhered to the one-China principle, and supported and participated in the Belt and Road Initiative proposed by China in 2013. Lee added that Singapore, by assuming the role of the ASEAN-China coordinating country and the ASEAN rotating presidency, would further promote relationship between ASEAN and China. Chang, for his part, noted that China-Singapore relations have witnessed all-around and in-depth development. According to him, the Chinese side was willing to work with the Singaporean counterpart to expand cooperation on national security and defense and strengthen political mutual trust, so as to push forward their all-round cooperative partnership progressing with the times and elevate the China-ASEAN strategic partnership to a new height. Chang was on an official visit to Singapore. During his stay, the Chinese minister met with Singaporean Defense Minister Ng Eng Hen on Monday and took part in the 8th China-ASEAN Defense Ministers' Informal Meeting Tuesday.