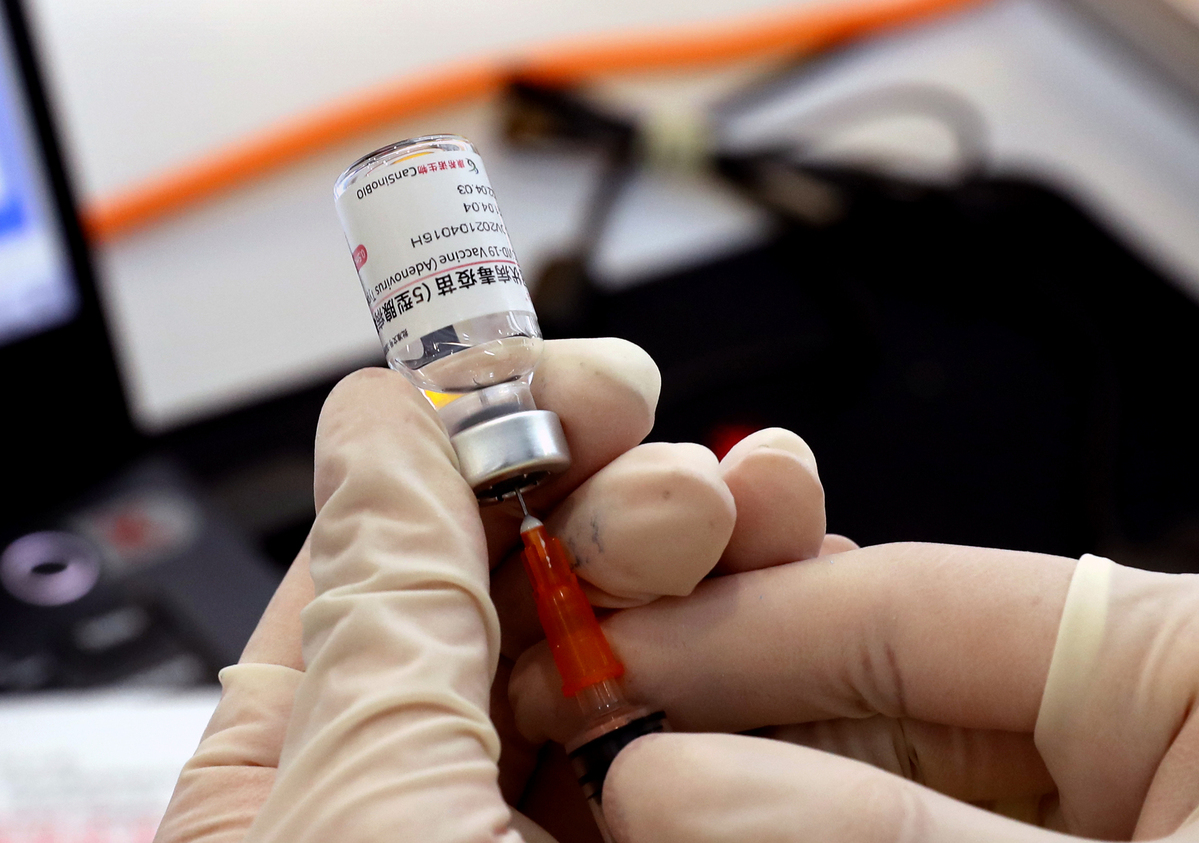 A nurse prepares a dose of adenovirus-based viral vector vaccine at a vaccination point in Shanghai, May 18, 2021. (Photo: Xinhua)

Several cities across China have recently started offering residents a single-dose COVID-19 vaccine in addition to the two-dose inactivated vaccines that were already widely used in the country's vaccination drive.

At the temporary vaccination station in Shanghai's Xuhui district on Wednesday, a new CanSino sign was placed alongside the Sinovac and Sinopharm ones as vaccine providers of the day.

People waiting to be vaccinated at the station were given the choice of receiving the single-dose adenovirus-based viral vector vaccine Ad5-nCoV, whose trade name is Convidecia. That vaccine uses a modified adenovirus to induce neutralizing antibodies against the COVID-19 virus.

The vaccine, developed by CanSino Biologics and the Academy of Military Medical Sciences, has been distributed across Shanghai since Thursday, according to the city's Center for Disease Control and Prevention.

The center said the new vaccine, like the others, is injected into muscle tissue and is as safe and effective as the inactivated virus vaccines in use. It is also available for people above age 18.

Its phase 3 clinical trial data show it to be 65.7 percent effective at preventing symptomatic cases and 90.98 percent effective in preventing severe cases. No severe side effects have been reported aside from those typical of other COVID-19 vaccines: pain at the injection site, fever, fatigue, headache, muscle soreness, chills and diarrhea.

The National Medical Products Administration authorized the vaccine for conditional marketing in February. It has also been approved for emergency use in Mexico, Pakistan and Hungary.

CanSino Biologics told the media that it has already provided vaccines to health authorities of Beijing and Tianjin, as well as the provinces of Zhejiang, Henan and Anhui.

At the Xuhui district vaccination station, healthcare workers said the vaccine is not recommended for people with preexisting immune system illness such as HIV and lupus erythematosus, as well as people who have diabetes or high blood pressure. People who have already received the first dose of an inactivated vaccine are advised to continue with the second dose of the same vaccine.

Shanghai resident Guo Yuhong, who was inoculated with the single-dose vaccine on Wednesday, said his friends had recommended he do so because the new vaccine is more convenient and time-saving than the two-dose vaccines. He said he did not feel any side effects during the 30 minutes of post-inoculation observation.