Scoot Moore, director of Penn Global China Program, has given credit to China's unique model of water resources conservancy that requires a designated local official to be responsible for guarding against pollution and floods that may affect the quality and environs of each local waterway. 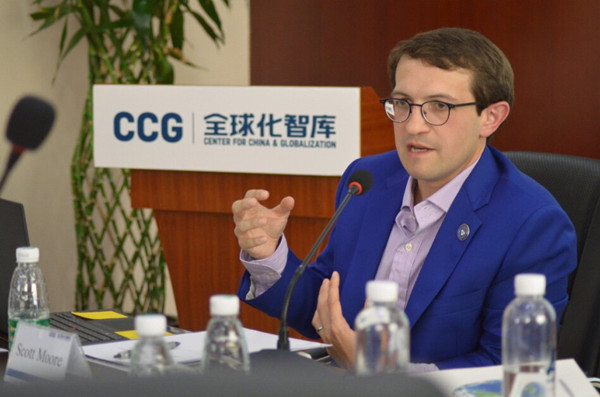 Scoot Moore, director of Penn Global China Program, delivers a speech at the symposium entitled "the New Perspective on Sub-national Water Conflict" at the invitation of the Center for China and Globalization (CCG), a Beijing based think tank, on Sept. 10, 2018. [Photo Courtesy of CCG]

Moore made the comments while delivering a speech at a symposium in Beijing on Sept. 10 entitled "The New Perspective on Sub-national Water Conflict" at the invitation of the Center for China and Globalization (CCG), a Beijing based think tank.

Having conducted field research in China before the July publication of his latest book "Conflict, Cooperation and Institution-Building in Shared River Basins," Moore said the approach adopted by China to improve water quality was distinctive and useful.

"Even more significantly, though, and more recently, China is developing something called a river chief system," Moore said. "What the system tries to do is to designate basically additional responsibilities for every local official at provincial level, city level and county level, including governors and mayors, to be responsible for ensuring the river is kept clean in their jurisdictions."

"I think it is a very interesting and sophisticated system," he said.

According to the sinologist from the University of Pennsylvania, local officials with such duties may work like sheriffs or enforcement officers, ensuring the smooth running of programs for protecting water resources.

Referring to "three alarm lines," generally, the control of over-exploited water resources, the efficiency of using such resources and the control of sewage pollution of waterways, stipulated in the document on water conservancy issued by the Chinese government in 2010, the scholar believed China was doing a much better job than what it has been believed up to now.

"From a national point of view, even though you often hear people talk about water scarcity in China being a significant concern, actually, I don't think that is necessarily true, because, in comparison with many others in the world, China is in a fairly good position with the respect of its availability of water resources," Moore said.

Still he reckoned that the major challenge for the country remained the disparities in water availability.

When talking about China's South-to-North Water Diversion project, Moore raised his concerns about the cooperation between the sub-national jurisdictions.

"Basically, what you are doing is creating a series of new rivers across the country. That brings lots of challenges. You have to do things to control the pollution flowing from the southern regions to central China and to the north, and that requires a lot of cooperation and coordination between many provinces, cities and prefectures."

Moore has been working for some time on sub-national jurisdictions over water resources by highlighting its importance in an era of climate change.

"Certainly, some places in the world in the next few decades, around 2050, will see the large-scale decrease of water flowing through streams, rivers and some water bodies," he said.

"For certain regions, the impact will be greater than for others. However, on average, we can expect that, for every one degree the global temperature increases, about 7 percent of the world population will experience a decrease of water availability of about 20 percent for certain parts of the year."