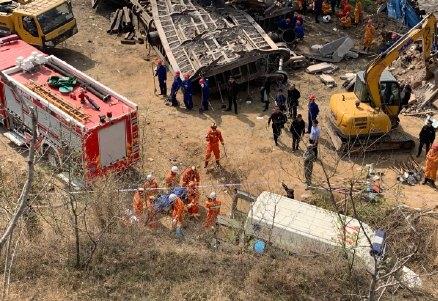 The 25-car train, owned by a branch of the logistics subsidiary of Aluminum Corporation of China, hit a village house in the city of Gongyi, after it ran off a catch siding and some cars overturned at around 10 pm Wednesday, leaving four crew members and two farmers missing, according to the publicity department of Gongyi.

As of 5:49 am Friday, the six people had all been found and confirmed dead.

The loaded train weighed 2,350 tonnes. It was running along a 22-km rail built in the 1950s for transporting aluminum ore. The rail section where the accident occurred has a continuous downward slope.

The cause of the accident is being investigated.