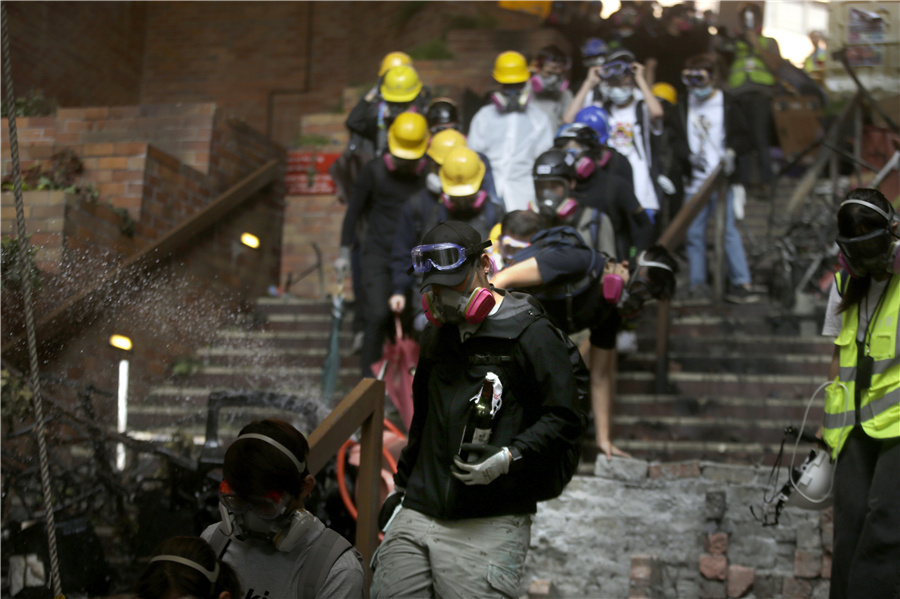 A rioter walks down the stairs with a gasoline bomb at Hong Kong Polytechnic University, on Nov 18, 2019. (Photo: Agencies)

HONG KONG - Six more people, including two students, were arrested on Wednesday in connection with a homemade pipe bomb seized by police - the first one found in Hong Kong.

The day before, police had defused a handmade bomb containing 40 grams of explosives in a subdivided flat in Mong Kok and arrested four people.

At a public briefing on Wednesday, police said they arrested six more suspects, all males aged from 17 to 23 years, in different districts. The suspects included two students, a kindergarten teacher, a barista and two unemployed people.

They were arrested on suspicion of manufacturing explosives, possessing dangerous substances, and illegal assembly. Police believe they are members of a radical group with a low profile, adding that they intended to use the bomb to attack police officers or vandalize police facilities by detonating the device at a mass public event.

Police said it is the first time that a homemade pipe bomb had been found in Hong Kong. This type of bomb, often used overseas to attack government facilities, could cause serious injuries even death after exploding into small pieces.

The police reiterated that making explosives with the intent to endanger life or property is a serious crime punishable by up to 20 years' imprisonment.