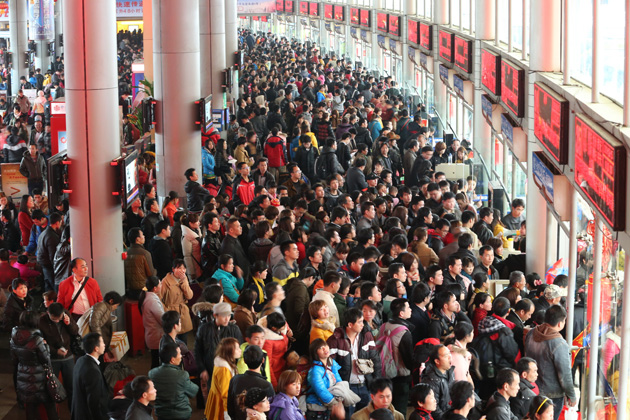 This year's Spring Festival travel rush, known as chunyun, will see people taking 2.98 billion trips by various means, with high-speed trains playing a greater role during the world's largest annual migration. Monday marks the first day of this year's chunyun, when people start to travel home for the Chinese New Year, which falls on February 16. The travel rush will last until March 12, said the Xinhua News Agency.About 390 million trips will be made by train, China Railway said in a news release sent to the Global Times.China Railway said 57.5 percent of rail travelers will take high-speed trains, up 4.8 percent from previous year.In order to provide a "safe, organized and warm" chunyun for passengers, China Railway has implemented new measures to make taking the train easier and more comfortable. Railway stations have self-service counters that can authenticate tickets and ID. An online meal delivery service allows passengers to order ahead and try local delicacies along their route, said China Railway.High-speed trains are putting a serious dent in the time it takes to travel home. For example, it now only takes nine hours to get from Beijing to Chengdu by high-speed train said a traveler surnamed Shi, adding that before high-speed service the trip took almost 30 hours.A man from the Republic of Congo, who gave his name as Miao Shu, said he was lucky to be able to book his trip from Hangzhou, capital of East China's Zhejiang Province, to Beijing just as the travel rush is about to begin. Although there were obviously more people than usual, Miao said that the service was still good."I really like China Railway's punctuality and convenience because you can order food on the train and have WiFi," he said.Toilet RevolutionThe railway authorities this year also launched what they are calling the "toilet revolution."On the four-hour train trip from Shanghai to Beijing, cleaners will check the toilets at least once an hour and ensure they meet 'hotel standards,' according to Xinhua. "The toilet used to be unbearable. But now it's as clean as hotel toilets and I can even smell a nice aroma," a passenger surnamed Wang who arrived in Beijing from Shanghai on Thursday morning, told the Global Times.Road trips less popularChina Railway will not only add more trains to meet the increased passenger demand but also plans to open at least one new rail line during the holiday rush.Some 576 trains will be put into service in the days leading up the official national Spring Festival holiday week, which runs from February 15th to the 21st. After the official holiday week China Railway said it will put 665 extra trains into service to meet the wave of travelers returning to where they work.A new high-speed rail line linking Southwest China's Chongqing Municipality to Guiyang, capital of Southwest China's Guizhou Province will be put into use for the first time after the official holiday week. It will shorten travel times between the two cities from 10 hours to two hours.As train and air travel become increasingly convenient and comfortable, the number of people traveling by road is expected to show a slight decline for the first time in chunyun. The number of road trips will drop 1.6 percent to 2.48 billion, Lian Weiliang, deputy director of the National Development and Reform Commission, said at a news conference on Wednesday.Meanwhile, some 65 million trips are expected to be made by air, up 10 percent from last year, said Lian.