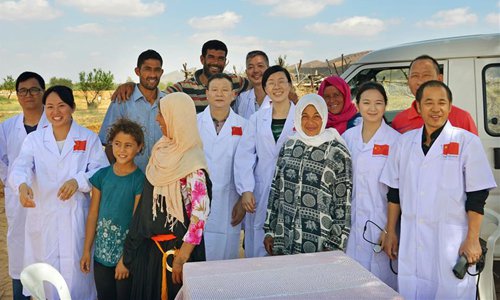 File photo shows members of the 21st Chinese medical aid to Tunisia pose for a photo in Sidi Bouzid, Tunisia. Since 1963, some 220 million patients in 48 African countries have been treated by Chinese medical personnel as of 2018, according to the National Health Commission. Currently, 983 Chinese doctors are providing free medical services in 45 African countries. (Photo: Xinhua)

Chinese medical expert teams dispatched to Nigeria to tackle the COVID-19 pandemic said it received mixed reactions from locals, which reflects some African people being influenced by a group of Western forces who are trying to smear and belittle China's efforts in helping African countries.

Though China has been partnering with African countries on health for decades, some political actors try to sow division about this partnership. Some of the antagonism in the media or from political parties is supported by the Western world, Chinese experts said.

However, as the COVID-19 spreads on the African Continent, which could be likely to become the next epicenter, experts noted that China would continue to lend a hand in helping African people in medical field.

Chinese foreign ministry reaffirmed China-Africa friendship and cooperation during the global pandemic in response to the Chinese medical team's encounters.

The 15-member medical expert team, bringing medical supplies, arrived in the Nigerian capital of Abuja on Thursday. The team was sent by The China Railway Construction Corporation.

Chinese Ambassador to Nigeria Zhou Pingjian disclosed the value of the equipment and medical supplies is about $1.5 million, the Africa News reported.

The Chinese medical team is now under quarantine in Nigeria, the Global Times learned Sunday.

Nigerian Minister of Health Dr. Osagie Ehanire said the mission will strengthen the response in Nigeria based on lessons from China, Nigerian independent newspaper the Guardian reported.

Ehanire said the Chinese medical team will "provide first-hand experience and insights on how they were able to bring the spread of the disease under control."

However, there are reports that some groups in Nigeria, such as the Nigerian Medical Association (NMA), do not welcome the Chinese medical team.

"We are not going to meet or interact with Chinese medical team," Francis Faduyile, president of the NMA, was quoted by the Vanguard as saying on Sunday.

The association in a previous statement listed many reasons for their opposition to the visit of the Chinese medical team, such as that it is a "thing of embarrassment" to the association and medical staff in Nigeria, or that "the spike in cases and the death toll from COVID -19 in Italy coincided with the arrival of the Chinese in the guise of offering assistance."

Under a report about the NMA statement, some local netizens showed their support.

"China has made clear it wants to help but even in Africa where it has cultivated deep ties, that help is viewed suspiciously and, in some cases, even unwelcome," wrote Kwasi Gyamfi Asiedu, a freelance journalist based in Accra, Ghana on Quartz Africa.

"There are always different voices in African countries, from the opposite parties or forces," He Wenping, a research fellow of the Institute of West-Asian and African Studies at the Chinese Academy of Social Sciences, told the Global Times on Sunday. "The voices have their certain targeted markets; some people would choose to buy them," she said, adding that such reports might influence perceptions about China's work and aid in Africa.

There are voices in politics or media that might be supported by the Western forces seeking to derail China's work in Africa. "Any little negative things about China would be grabbed and enlarged by them," He said.

Being the largest medical association in the West African with  more than 40,000 members, the NMA was founded as a branch of the British Medical Association in 1950s.

According to NMA's official website, it was established by several international organizations, such as the US State Department and US Agency for International Development (USAID).

USAID is a federal government organ that has advanced US foreign policies such as promoting free markets since the 1980s. It claims a record of "helping" countries establish democracies since the 1990s.

According to the website, NMA is "consulted formally by the Nigerian government only on an ad-hoc' basis." It also claims it was historically described as an "unofficial society" due to "government hostility."

Chinese doctors in Africa have expressed similar experience to what happened in Nigeria.

In the Republic of Equatorial Guinea, some Western reports of COVID-19 influenced local attitudes toward Asians at the early stage, Chen Shuo, a Chinese doctor aiding the central west African country, told the Global Times.

At the end of February, there was no local cases reported. Some locals kept a distance with Asians on the street as they believed the virus was from Asia, echoing xenophobia in the West. Some Westerners from other countries gossiped and pointed at Asians on the beaches, Chen said, adding that there was no excessive discrimination.

He noted that some people were just sensitive and afraid of the virus. Local people's attitude toward Chinese doctors wasn't impacted very much. "They are very welcoming to Chinese doctors as we help them get well. I helped people see again through cataracts surgery, and they are very grateful and respectful to me," Chen said.

"Equatorial Guinea's epidemic prevention efforts have not been greatly affected by biased western reports. The country has learned a lot from China in epidemic prevention, such as the lockdown of cities and villages," Chen noted.

He, the Chinese expert, said that Chinese people traditionally believe that they should "Talk less and do well." She noted that China might need to promote their image better in terms of how it helps Africa. He said China will not shy away from assisting Africa as the pandemic spreads.

There might be a small rift tarnishing China's work in Africa, but it would not cover up the big act of kindness, she said.

The Chinese medical team was sent "at the request of the Nigerian government," said Zhao Lijian, a spokesperson of China's Ministry of Foreign Affairs, on Friday during the daily press conference.

"For China, it is only natural to help African countries fight the pandemic in light of our friendship and cooperation," Zhao said. "With mutual support and assistance, China is ready to work with African countries including Nigeria for the final victory."

According to the Nigeria Centre for Disease Control on Sunday, the country has confirmed 380 cases of COVID-19.

In addition to sending medical supplies, China has sent medical expert teams to several countries, such as Italy, Iran, Iraq and Russia, to share experience in preventing and containing the COVID-19 pandemic.