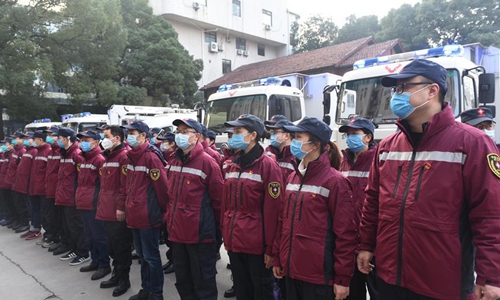 A medical team comprised of 42 members from the Second Xiangya Hospital of Central South University set off on Tuesday to aid the coronavirus control efforts in Hubei. (Photo: Xinhua)

In addition to the provincial capital Wuhan, other cities in Central China's Hubei Province are also seeing a worsening novel coronavirus epidemic with fatality rates exceeding that of Wuhan, and local residents and observers have urged more attention needs to be paid to these Hubei cities with medical facilities, personnel and supplies far below demand.

A meeting on Thursday of the Central Leading Group on Responding to the Novel Coronavirus Pneumonia Outbreak chaired by Premier Li Keqiang pointed out that cities other than Wuhan should build new hospitals to offer more beds. Support teams from 16 provinces will help ease the personnel shortage.

The Ezhou government issued an appeal letter on Wednesday, calling on all retired and former medical staff to return to their posts to fight the 2019-nCoV amid the aggravating pressure on medics.

"The prevention and control situation of the epidemic is very grim, as the city ranked second place in terms of infection and fatality rates in Hubei Province. The pressure on Ezhou's medical staff is already the highest in the province and even in the whole country," read the appeal letter published on Ezhou government's website.

According to statistics from the Hubei Health Commission, as of Wednesday midnight, Ezhou reported 423 confirmed cases and 18 deaths, and the fatality rate was 4.26 percent, higher than Wuhan's 4.09 percent. The city only has two designated hospitals to treat the epidemic.

Xiaogan, Huanggang and Suizhou rank second, third and fourth after Wuhan in terms of the number of confirmed cases.

The four cities have been under lockdown as early as January 24. In Huanggang and Ezhou, each family is only permitted to have one person go out to buy daily necessities once every two days.

For these small cities, to control the worsening epidemic using their own efforts seemed an impossible task.

Local media outlets in Ezhou and Suizhou have published several messages from local hospitals asking for help in the past few days, saying that their storage of protective facilities and medical supplies was not only in shortage, but "zero."

A 25-year-old resident in Huanggang surnamed Yuan told the Global Times that hospitals in Huanggang are under great pressure. "There's only one first-class hospital in this city, with a population of over 6 million, so you can imagine the pressure we are facing right now."

Yuan said her father, a frontline doctor who is under quarantine in hospital, works 12 hours daily on average to treat patients. "They are in desperate need of protective suits and masks now. Many hospitals are nearly running out of those materials, and the number of infected patients keep surging."

Nationwide donations are going to Wuhan, but the situation in other cities in the province, such as Huanggang and Ezhou, can barely hold on anymore, said Yuan.

A woman surnamed Niu, who works in Beijing but returned to Jingzhou, her hometown in Hubei Province on January 23, said she had been witnessing the situation changing day by day.

"Earlier, there was rapid growth of infected patients in a critical condition, then many medical personnel became infected due to the lack of protective equipment and awareness regarding the seriousness of the disease," she said, noting that some treatments have also been delayed.

As the daughter of a local doctor, Niu said the last time her mother was this busy was during the SARS outbreak.

Wang Hongwei, a professor at Renmin University of China's School of Public Administration and Policy in Beijing, told the Global Times that unlike the provincial capital Wuhan with relatively high-quality medical services and waves of medical aids from both home and abroad, smaller cities in Hubei need immediate attention and assistance.

Although the country has dispatched medical personnel and supplies to assist these cities, it's obviously not enough.Meanwhile, national authorities have to guarantee the smooth and timely delivery of the supplies, Wang said.

He said that local governments must strictly implement the lockdown policies to prevent a wider spread of the virus.

In order to cope with the grim situation, cities including Ezhou and Xiaogan started to commandeer local private hospitals and hotels to treat more patients and building new hospitals like Wuhan's Huoshenshan and Leishenshan, according to local media reports.