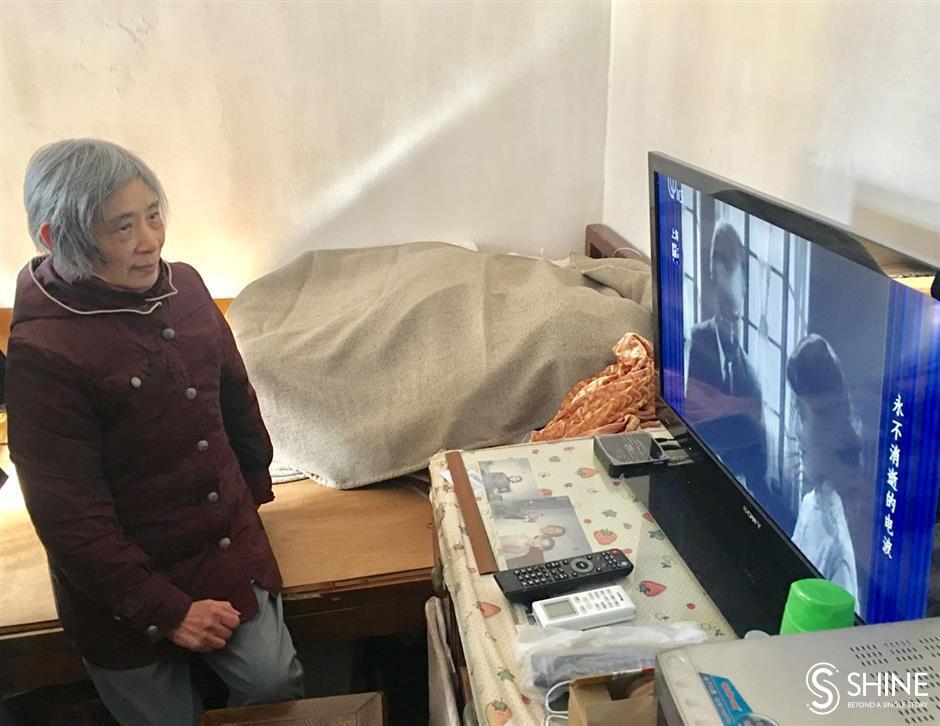 Zhou Juexin, who lives alone in Hongkou District, watches television after an intelligent chip was installed on her electricity meter. (Photos: Shine.com)

Zhou Juexin, 68, no longer needs to stand on her bed to repeatedly disconnect the air-conditioner to prevent overloading.

A smart chip was installed on Monday on Zhou’s electric meter on Monday.

The chip can collect and analyze her power use, triggering an alert if there is anything abnormal, such as a power overload or a lamp still on for a long time after midnight. Nearby community workers are alerted on the phone and can visit to sort the problem.

"I cannot quite understand the high technology, but I feel safe now,” Zhou said. "I can use an electric blanket in winter with the protection of the high-tech gadget.”.

Zhou lives alone in Hongkou’s Ouyang Road Subdistrict, which has one of the city’s densest aging populations.

Developed by a local tech company Visionet, the smart chip, an “intelligent circuit breaker,” can learn the power use habits of users based on data in the previous 20 days without consuming additional power.

When overloaded, the system will cut off the circuit automatically to prevent fires.

It will also send warnings when any resident is found charging electric bikes within residential buildings, a common violation likely to cause explosions and fires, according to Visionet.

When the chip was installed for a senior citizen living alone in Tianjin in north China in July, it sent an alert to a community worker when low electricity use was detected. Staff found the elderly person in time.

“The chip along with a smart senior’s service system is expected to get promoted across local communities,” said Gu Liting, executive president of Shanghai Visionet Information Technology Co. 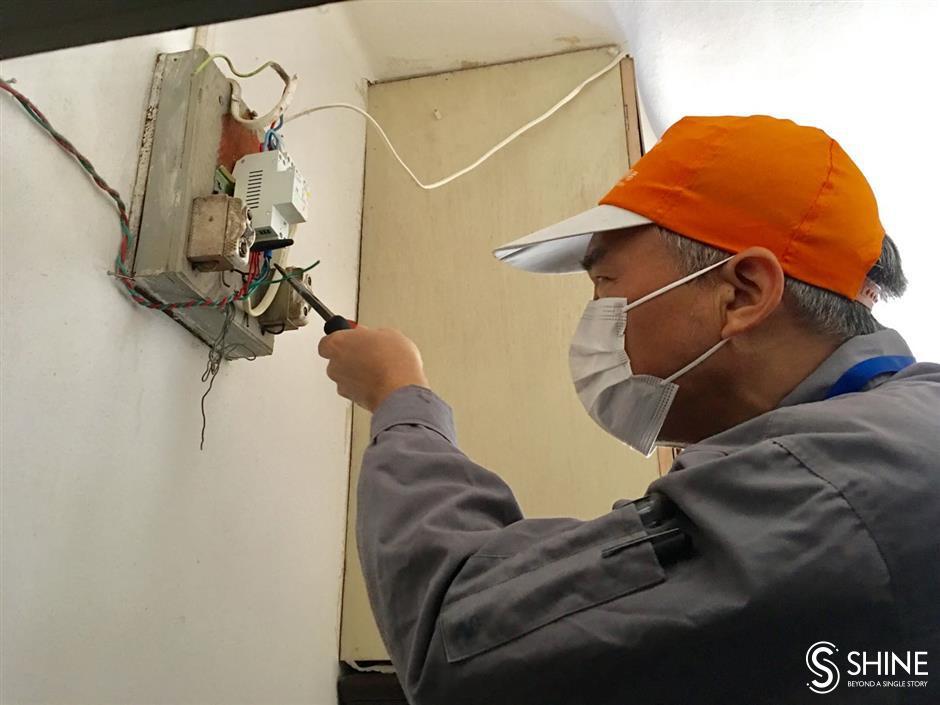 An electrician installs the intelligent circuit breaker for Zhou on Monday.

Local governments are applying more intelligent technologies to care for the city’s increasing number of elderly residents. The smart gadgets can ensure the safety of the elderly living alone or the physically challenged, while reducing the burden of community workers.

By the end of 2019, the number of residents 60 years or older in Shanghai stood at 5.2 million, or 35 percent of the city’s registered population. Some 90 percent are taken care of at home, as the traditional virtue of filial piety means children are reluctant to put their elderly parents in nursing homes.

Across the country, about 118 million senior citizens will be living alone at home by the end of 2020.

A first batch of 10 households have had the chips installed on their meters in a trial operation. The equipment will be promoted across the subdistrict, which has 203 seniors with no relatives and 1,311 seniors over 80 years old who live alone, said Wang Lei, Party secretary of the subdistrict.

“We aim to develop more digital governance scenarios to offer more delicate caring services to the seniors, while protecting their privacy,” Wang said.

Mao Xiaoyun, a neighborhood committee staff member, and Zhou Yali, an official with the subdistrict, volunteered to be Zhou’s emergency contacts, visiting as soon as possible in the event of receiving an alert on their phones.

“We used to visit Zhou or call at night frequently to ensure her safety, which may disturb her life and privacy sometimes,” Zhou said. With the chips, they can offer service more effectively, she added.

They will still visit Zhou about twice a week, mainly to ease her loneliness, she said.

Other senior care services, such as meal deliveries, matchmaking and service stations have been launched to enrich the lives of the elderly, said Zhou. 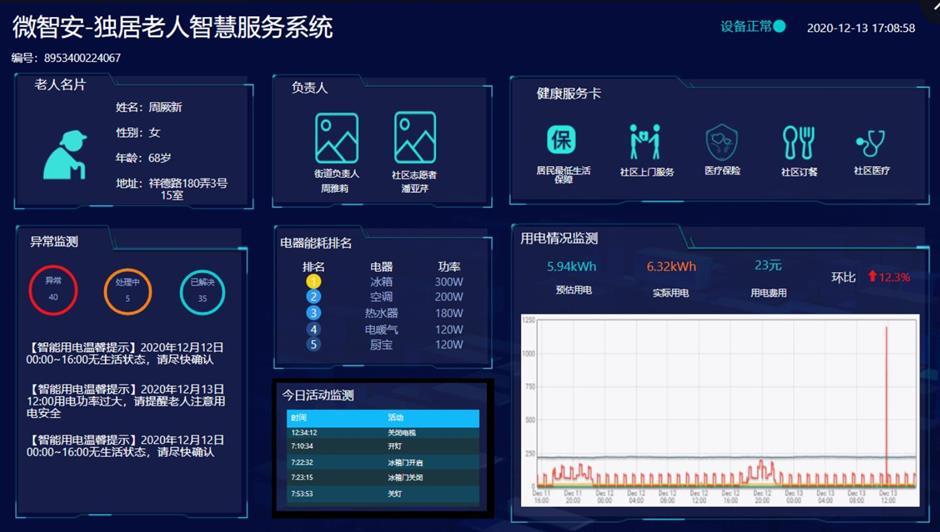 The smart elderly service system developed by Visione can display overloading or low electricity use of senior citizens and send alerts.

In another recent practice, a similar device was installed on the water meter for some seniors living alone in Changning District.

Other smart gadgets such as wireless door catches and smoke detectors are being installed for local seniors living alone.

The magnetic door mechanism, which will send an alarm if the door hasn’t been opened for several days, has also been used to supervise the home quarantine of those returning from overseas in some local neighborhoods amid the pandemic.

More such practices should be developed and be promoted nationwide, said Peng Xizhe, director of the Center for Population and Development Policy Studies of Fudan University.

“The technologies are not complicated, but with the innovative ideas, they become quite effective tools in the senior care sector,” Peng said.

However, he said new technologies should never replace human caring to make the elderly feel warm.

A complete senior care system can be established only under the joint efforts of the government, market, society and family members, as well as assisted by technology, he said.