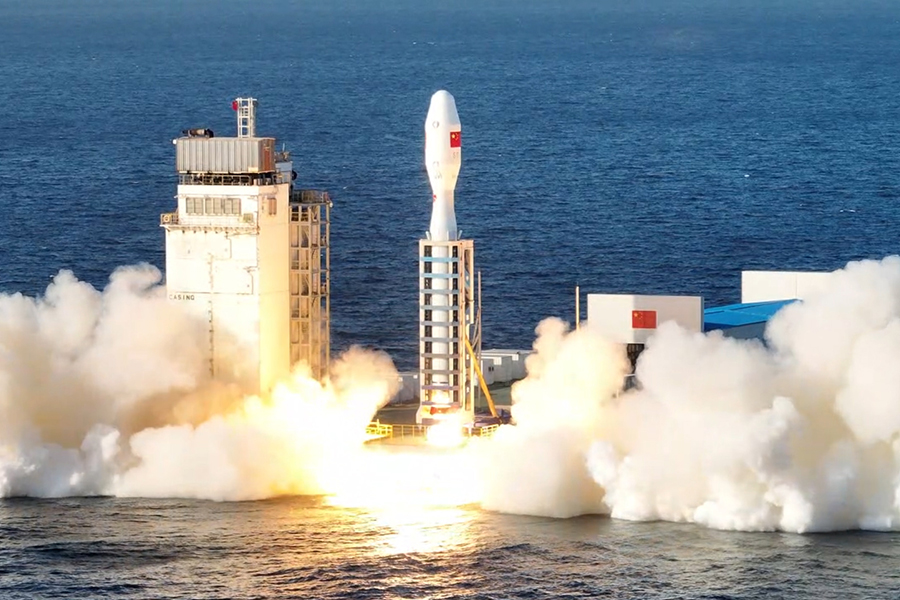 The Smart Dragon 3, a new solid-propellant carrier rocket, blasts off from a ship in the Yellow Sea on Friday. [Photo/Xinhua]

The Smart Dragon 3, a new solid-propellant carrier rocket, made its maiden flight on Friday afternoon, according to China Aerospace Science and Technology Corp (CASC), the country's leading space contractor.

The rocket blasted off at 2:35 pm from a ship in the Yellow Sea and launched 14 satellites into orbit during its flight, the State-owned conglomerate said in a news release.

The launch marked the 57th flight of Chinese carrier rockets this year.

Designed and built by the China Academy of Launch Vehicle Technology, the country's major rocket maker and a CASC subsidiary, the Smart Dragon 3 is 31 meters tall, has a diameter of 2.65 meters and can carry a liftoff weight of 140 metric tons.

The rocket is mainly propelled by a high-performance, solid-propellant engine made by the Academy of Aerospace Solid Propulsion Technology in Xi'an, Shaanxi province, another CASC subsidiary.

The engine holds 71 tons of propellant that creates a thrust of 200 tons.

With its successful debut flight, the Smart Dragon 3 is now the largest and strongest in China's solid-propellant rocket fleet. It is capable of sending multiple satellites with a combined weight of 1.5 tons to a sun-synchronous orbit at an altitude of 500 kilometers.

The model is the second Chinese rocket capable of making liftoff both on land and at sea. Previously, China had carried out two ship-based rocket launches using its Long March 11 solid-propellant rocket.

The new rocket is suitable for clients who wish to quickly launch large numbers of their satellites to establish space-based commercial networks as soon as possible, according to Jin Xin, the rocket's project manager.

Guan Hongren, the rocket's chief designer, said the model can carry multiple types of fairing — the top structure on a rocket that covers or protects satellites or other payloads. This means, the model can hold spacecraft of wide-ranging sizes.

He said a new type of launch service ship is under research and development. It will be able to carry multiple rockets and conduct several launches in a single voyage.

Jin said: "Now we have started designing the Smart Dragon 4, which will be larger and more powerful. We are also studying the possibility of bringing liquid-propellant rockets to the sea for launch."

Jiang Jie, a top scientist at the academy and academician of the Chinese Academy of Sciences, said that compared with conventional land-based launches, a sea mission has a lower risk of causing trouble for densely populated areas along the rocket's trajectory. The method also allows launches to be made near the equator, which increases the rocket's carrying capacity, lowers launch costs and extends the life span of satellites.