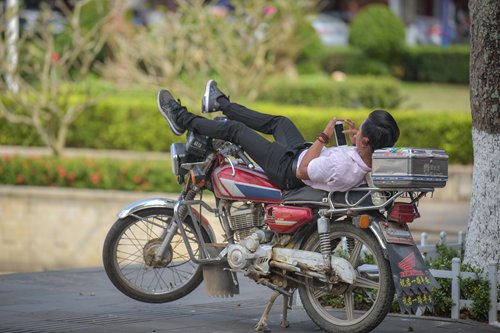 A man engrossed in his smartphone lies on a motorcycle in Baisha Li Autonomous County, South China's Hainan Province, on Friday. (Photo: VCG)

While the leading smartphone manufacturers of the fourth-generation network (4G) era compete to launch 5G products, those who lost that race are preparing to seize opportunities that will come with the communication network upgrading. They hope to win more market share in 2019.A shake-up to the smartphone landscape will start as soon as the next week, as major phone manufacturers are expected to introduce their latest eye-catching devices to the world at the 2019 Mobile World Congress (MWC) in Barcelona, Spain.Huawei, the ambitious Chinese brand that aims to surpass Samsung's first place standing globally, plans to unveil its first foldable 5G smartphone at the industry's largest trade show, which will run from February 25 to 28.Huawei's crosstown rival ZTE will also use the platform to showcase its 5G device.According to a statement that the company sent to the Global Times on Monday, its new 5G device will be the world's first phone that can support the sub-6GHz and mmWave bands. Other brands from around the world including Samsung, LG, Sony, Xiaomi, Oppo, Vivo and OnePlus will also launch new products at the MWC, according to media reports."We'll see many smartphone vendors release 5G smartphones at the upcoming MWC in Spain and the average price won't be very high, and 5G smartphones will be accepted by the public in 2019," Zhou Yuefeng, chief marketing officer of Huawei Wireless Solution, told a group interview held in Shanghai on Monday. The 5G competition began when the world's first 5G standards were issued in 2018, and the competition is about to heat up this year. Analysts noted that phone producers are enthusiastic about the significant opportunities that are expected to emerge as the upgrading of communication networks takes place."Reshuffles happen every time technology upgrades. The 2G era was led by brands like Motorola and Nokia ... the 3G era was led by Samsung ... 4G was the time of the iPhone and a series of Chinese brands like Huawei," Fu Liang, an independent Beijing-based analyst, told the Global Times on Monday.Buffer-free video, faster downloads and the ability to handle large files with ease .. all these features of 5G phones have gotten consumers excited about the new products. But they may have to curb their enthusiasm until next year when basic networks are established, according to industry sources.5G technology is developing fairly fast. For the smartphone industry, it just took one year to move from the system testing phase to mature end devices, but the network must be built first, Zhou said.