Snow has disrupted traffic in a number of parts of China.The northwestern part of central China's Hubei Province saw the first snowfall of 2018 on Wednesday. Meteorological authorities in the city of Shiyan issued an orange alert for blizzard on Wednesday afternoon. The runway of a local airport was closed, and 14 flights were canceled.In the country's four-tier warning system, red is the most severe weather, followed by orange, yellow and blue.In China's central Henan Province and northwestern Ningxia Hui Autonomous Region, some highways were closed due to snow. Local buses in Ningxia were also affected.Snow in Xi'an, capital of Shaanxi Province in northwest China, led to the delay of many high-speed trains.

China's national observatory on Wednesday continued a yellow alert for snowstorms in the central regions Wednesday and Thursday.

Parts of Shanxi, Shaanxi, Henan, Hubei and Anhui will expect heavy snowfall during the period, resulting in up to 20 mm of snow in some areas, the National Meteorological Center forecast.

The observatory advised residents to stay indoors and urged local authorities to take precautions regarding roads, railways, electricity and telecommunications.It said central and eastern regions could expect widespread rain or snow in the next 10 days, while temperatures in northwestern areas and regions along the Yellow and Huaihe rivers will drop. 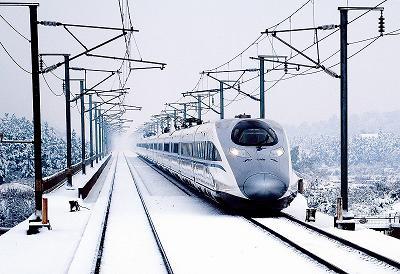