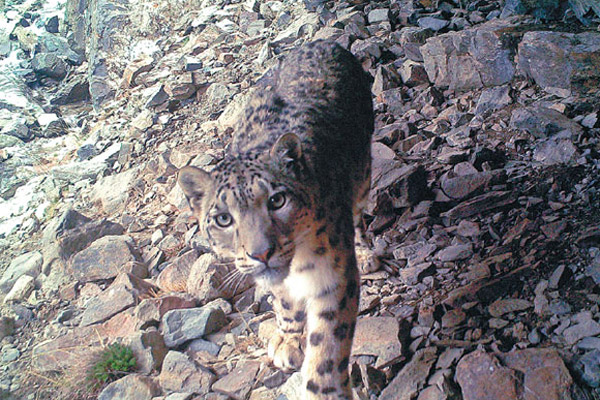 A snow leopard photographed in the Qilian Mountains, which straddle the border between the provinces of Gansu and Qinghai in June 2017. (Photo/Xinua)

"I was with a scientific survey team, and we were heading toward a mountaintop in Namsel township, Yushu Tibetan autonomous prefecture," said Li, a student at Peking University. "I saw seven snow leopards that day."

Li said it was a cloudy day, and the grassland was quite slippery.

"We saw a snow leopard hiding behind a huge rock, feasting on a blue sheep," she recalled. When nighttime came as the group returned, they saw a female leopard and her two cubs climbing up the mountaintop right across from where they were walking.

"The snow leopards' eyes were sparkling in the green lights," Li said. "We were very excited because it was the first time we saw snow leopards in the wild."

Namsel has an average altitude of more than 4,000 meters above sea level, and forms part of the Sanjiangyuan National Park.

Sanjiangyuan is home to the headwaters of the Yangtze, Yellow and Lancang (Mekong) rivers and many rare wildlife species. It has been dubbed "Asia's water tower".

Tashi Dongdre, Party chief of Namsel, said the township has more than 181,667 hectares of land, but the population numbers to just 8,471. More than 100 infrared cameras have been installed in the township so far, with more than 80 local herdsmen joining hands with scientists to observe the wild leopards.

"We have so far observed 40 snow leopards, and video footage of the animals living, hunting, or mating has been collected for scientific research," Tashi said.

Authorities are building the Sanjiangyuan National Park to better protect wildlife there, including the snow leopards. The park, which has been under construction since 2016, is set to open in 2020.

"Building the park will help protect the biodiversity, and better protect the rare species here," said Jiu Xie, who is with the management bureau of the park.

The population of wild animals such as snow leopards, brown bears and yaks in the area has been rising since 2016, Jiu said.

Snow leopards are a grade 1 protected animal in China and are classified as "vulnerable" by the International Union for Conservation of Nature. They inhabit the Himalayas in Central and South Asia at an altitude of 2,500 to 4,500 meters.