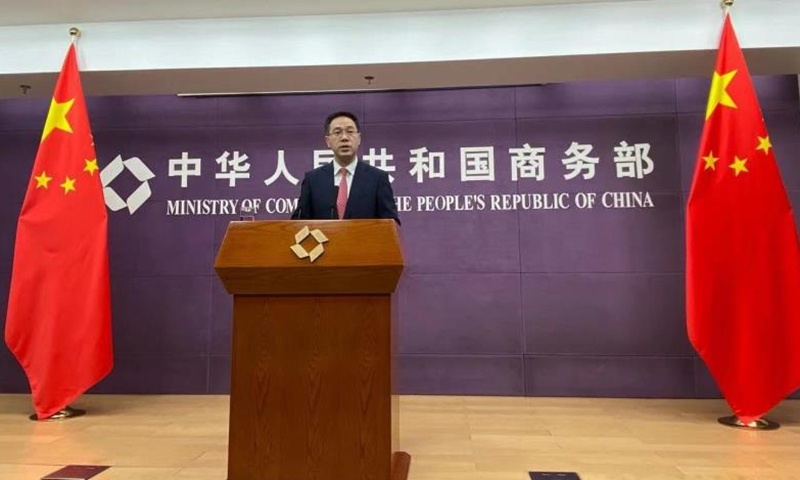 Gao Feng, spokesperson for China's Ministry of Commerce, at a press conference in Beijing on Thursday (Photo: Global Times)

The so-called anti-China protests in Kazakhstan are in fact malicious hyping by a handful of people, Gao Feng, spokesperson for China's Ministry of Commerce (MOFCOM), said on Thursday.

In response to a question about anti-China protests in the Central Asian country, and critics’ remarks that China relocates environmentally polluting manufacturers to Kazakhstan, Gao told a regular press conference in Beijing that the so-called criticism is not in accordance with the truth and stems from ulterior motives.

China and Kazakhstan have forged a permanent comprehensive strategic partnership and Kazakhstan is where the Belt and Road Initiative (BRI) was initially proposed, the spokesperson said.

The two countries have in recent years made joint efforts to push for the BRI's construction, which achieved fruitful results and proved to greatly benefit the people of both countries, he said.

Bilateral trade made steady headway last year as both countries overcame the fallout of the COVID-19 pandemic. According to Kazakhstan’s data, bilateral trade grew by 4 percent in 2020. In another sign of robust recovery, in the first two months of this year, China’s trade with Kazakhstan soared 20 percent, Chinese statistics showed.

There were nearly 10,000 China-Europe freight trains that ran through Kazakhstan in 2020, and Kazakhstan became a hub connecting Europe and Asia.

As of the end of 2020, China’s outstanding direct investment in Kazakhstan had hit $7.83 billion, contributing immensely to local job creation and economic development.

Bilateral cooperation in the sphere of the green economy, exemplified by new energy, ecological agriculture and healthcare, has advanced steadily, the spokesperson added, citing the Chinese-built 100-megawatt wind power plant in south Kazakhstan's Zhambyl Region, whose grid-connected power generation can help in reducing more than 1,000 tons of sulfur dioxide and nearly 300,000 tons of carbon dioxide.

China will hold to the principles of joint consultation, and co-construction and sharing, and it will work with Kazakhstan to deepen pragmatic partnerships in varied fields, the spokesperson said.

In an interview with local media, Chinese Ambassador to Kazakhstan Zhang Xiao said that the two countries have embarked on economic and trade cooperation on the basis of equality and mutual benefits, the China News Service reported on Wednesday.

Under the framework of the BRI and the Bright Path new economic policy, the two countries have jointly launched a raft of investment initiatives and industrial capacity tie-ups, tremendously improving Kazakhstan’s industrialization and increasing local jobs, according to the ambassador.

Kazakhstan has also built 10-plus roads and railroads linking China and Europe.