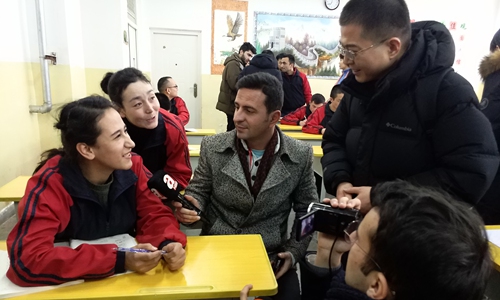 In an exclusive interview with the Global Times, the spokesperson of Northwest China's Xinjiang Uyghur Autonomous Region on Monday refuted the recent fake stories of so-called victims of training centers in Xinjiang, including Mihrigul Tursun and Sayragul Sauytbay, who claimed some "detainees were tortured" and were restricted to use the toilets in the centers.

ICIJ released a report, claiming that many victims from Xinjiang's vocational training centers, including Mihrigul Tursun and Sayragul Sauytbay, shared their stories of being mistreated at the centers. And they also claimed that nine women died living in harsh conditions in these centers.

"I want to say that the vocational education and training centers in Xinjiang are schools, not 'concentration camps.' All training centers have medical rooms with doctors offering free day-long services to trainees," the spokesperson told the Global Times.

The Chinese Foreign Ministry had previous offered a detailed response to stories of so-called victim Mihrigul Tursun at a press conference.

Mihrigul was a resident from Qiemo county in the Bayingolin Mongolian Autonomous Prefecture. She was taken into custody by the Qiemo public security bureau on April 21, 2017 for inciting hatred and discrimination among ethnic groups.

During her detention, she was found with syphilis. Out of humanitarian concerns, the public security bureau withdrew custody on May 10, 2017.

Aside from the 20-day custody, Mihrigul was free in Xinjiang. From 2010 to 2017, she made 11 trips to many countries, including Egypt, Thailand and Turkey.

"Mihrigul had never been detained by police in Urumqi nor was she sent to any training center," said the spokesperson.

Mihrigul also lied that her brother was tortured to death in the training centers.

Her brother Erkbar Tursun said that "my sister is always telling lies. She not only said I died, but also lied about others' deaths."

The regional government spokesperson also refuted stories of Sayragul Sauytbay, who is a resident from the Kazak ethnic group and lived in Zhaosu county, Ili Kazak Autonomous Prefecture.

Sayragul used to be the head of a kindergarten but was removed from her post in March 2018 for incompetence and defrauding the working bonus. She was transferred to a primary school as a teacher.

Sayragul was suspected of fraud, with 249,000 yuan ($35,361.29) not returned. Before fleeing overseas, she had never been to the training centers in Xinjiang.

The spokesperson said, "How could she see the notice on limiting people to use toilets for two minutes in the training centers if she had never been there? To avoid punishment for breaking the law, she went to Kazakhstan illegally and spread rumors to smear Xinjiang. Her deeds are contemptible."