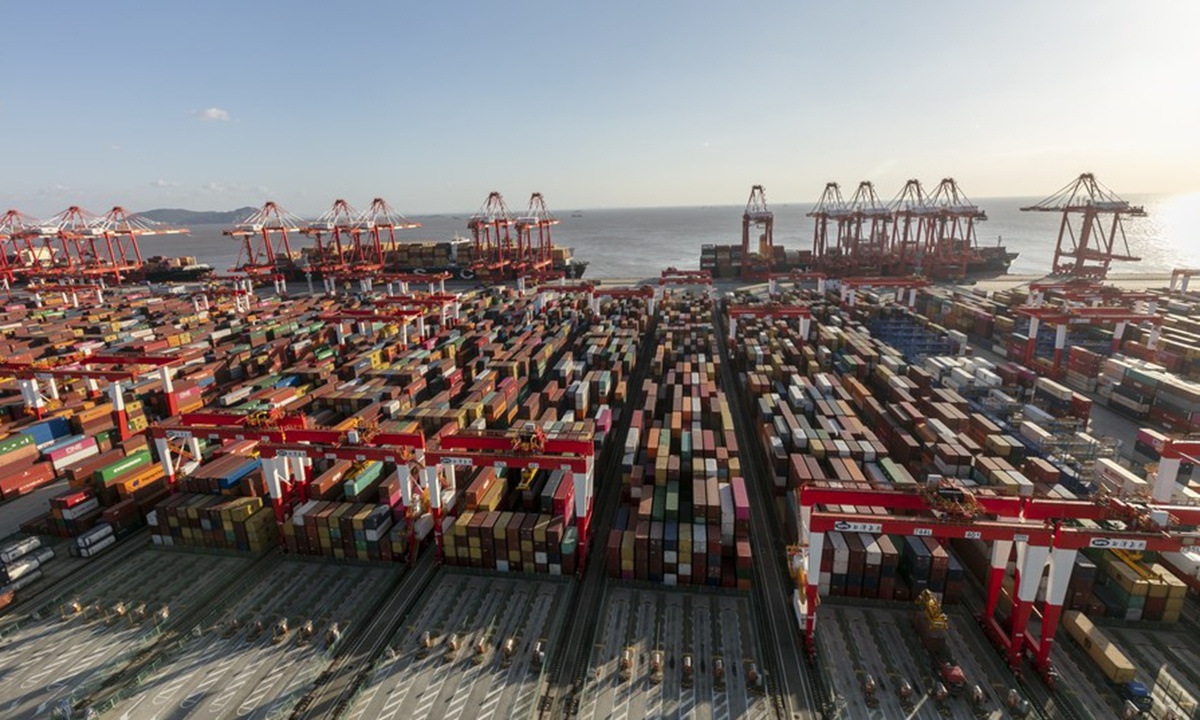 There is a high likelihood that China and the US will post a bilateral trade record this year, experts said, as their industries and economies are closely intertwined and cannot be decoupled, despite ongoing geopolitical spats and some US politicians' hue and cry intended to stem China's rise.

The inseparable China-US economic relations are reflected in the two countries' trade data. Although no moves have been taken yet to remove the trade-war tariffs, China-US bilateral trade started to take off around mid-2020 in the depths of the pandemic and has showed no signs of abating into 2021.

According to Chinese customs data released on Tuesday, China-US trade spiraled up by a striking 61.3 percent in yuan terms in the first quarter of this year to reach 1.08 trillion yuan ($165 billion). This growth outpaced all of China's other major trading partners including Japan, the EU, and Association of Southeast Asian Nations (ASEAN) economies.

Although the growth has slowed a little bit from the two countries' trade rise in the first two months of this year, it is still a "super strong" rise in the eyes of several Chinese economists, who stressed that it shows the tariffs imposed by the former Trump administration have had no great impact on China-US trade and supply chain cooperation.

The widening data is in contrast with US ambitions to reduce the gap - one of the key motivations for former US president Donald Trump to launch the trade war against China. Most of the tariffs remain in place under the new Biden administration.

"The data proves that politicians can't break the economic laws," He Weiwen, a former senior Chinese trade official, told the Global Times on Tuesday, stressing that the trade rise attests to the US' reliance on China-made products - especially after exploring all around the world for substitutes over the past two years.

The beyond-expectation export number indicates external demand is gradually recovering, while demonstrating manufacturing ability in the world's major economies including the US are still recovering at a slow pace, thus orders are all flowing into China, Cao Heping, a professor of economics at Peking University in Beijing, told the Global Times on Tuesday.

Tian Yun, vice director of the Beijing Economic Operation Association, said the first-quarter rise in China-US trade is particularly impressive, because the trade boom in the first two months could be attributed in large part to a low statistical base last year due to the coronavirus shutdown, but the economic stand still started to improve in March 2020, meaning that this March's growth was driven by a genuine demand surge.

"China's rising trade with ASEAN members and the EU can offset any losses from a decrease in trade with the US trade, and when China's exports to the US are still robust despite a rising yuan and the US crackdown measures, the answer is clear as to which one of the two countries is more dependent upon the other," he said.

China's trade with the EU and ASEAN economies rose 36.4 percent and 26.1 percent in the first quarter. Currently, the US is China's third-largest trading partner behind the EU and ASEAN.

Several exporters told the Global Times that orders from the US have been particularly strong in recent months. Zhong Fang, CEO of Dongxin Firework, one of the largest fireworks exporters in Liuyang, Central China's Hunan Province, told the Global Times on Tuesday that the factory has been working day and night trying to complete US customers' orders for US Independence Day, which falls on July 4.

"We're short of hands so we're hiring more employees to cope with all the orders," Zhong said, adding that there has been an "evident increase" in orders from the US this year.

Last year, Dongxin Firework's exports of consumer fireworks to the US increased about 20-30 percent on a yearly basis, but Zhong hopes that the volume of exports would rise further this year, riding on the boom of vaccine-powered business normalization.

A shareholder surnamed Zhang of an A-share listed Chinese medical equipment company manufacturing ventilators and other medical instruments said that the company's exports to the US started to surge around April or May last year because only China had resumed production then due to its successful control of the pandemic.

The trend extended into this year and his company's exports to the US should rise by 5-15 percent this year on a yearly basis, Zhang said.

Experts have attributed the situation to short-term factors, such as the US government's huge fiscal stimulus plans which have increased US household incomes and consumption, but in essence, it reflects the inseparable ties between the two economies that resonate to their economic recoveries from the pandemic, they said.

"The rising China-US trade in recent months shows that economic decoupling can't happen, because China-US trade is complementary in many aspects, and industrial chains have been set up across the two countries that can't be removed in the short term," Cong Yi, a professor at the Tianjin University of Finance and Economics, told the Global Times.

In the first quarter, China's exports to the US rose 74.7 percent, while imports from the US increased 69.2 percent.

Tian told the Global Times that machinery and electronics are the two areas that had the strongest surge in Chinese exports to the US during the pandemic.

"Those products, unlike other China-made goods like shoes and boxes, are hard to find substitute manufacturers in emerging countries as their technical threshold is relatively high," he said, adding that the pandemic has boosted demand for those products as people need more electronic products like portable computers when they work at home.

According to him, China's exports of medical products to the US have also surged, though the growth should slow down in the next few months as production of facemasks and other goods has reached saturation point.

Experts generally expressed optimism about the prospects of China-US trade this year, although they still hold concerns over the volatile global geopolitical situation as the US has been instigating a Western ideological confrontation with China. Some worry the mounting political uncertainty may disrupt the international trade pattern and weigh on China's exports.

"Given the current trend, it's highly possible that China-US trade will hit a record high for this year," He said.

"I believe that China-US relations will be in a state of 'political chill and economic heat' this year, as the two countries' growing business interaction means the Biden administration will not decouple economic cooperation with hardline methods," Tian said.

Cong said that China-US relations have entered an "observation period" which has a lot of uncertainties, but in general, the Biden administration is unlikely to allow a harsh decoupling of the China-US economies with his "pragmatic approach" to China-US issues.

But it is not all bright when it comes to the future of China-US business. He Weiwen said that China needs to prepare for more tactics from the US, noting that the primary task is stabilizing the domestic market, then the Asian and European markets while promoting all possible cooperation with US firms.

Lian Ping, head of the Zhixin Investment Research Institute, estimated that the recent US muckraking about Xinjiang cotton could result in a 20-percent drop in China's textile exports to the US, Europe and Japan.

Cao warned that the US is at the crossroads to either a recovery or a deeper recession, and if the world's largest economy fails to control COVID-19 pandemic this year, it might be a potential threat to global post-pandemic economic recovery.

"We also call for US politicians to have more political wisdom rather than incite more political conflicts with China, since any confrontations between the world's two largest economies will reverse the hard-won global economic recovery," Cao said.

The US reported an 8 percent rise in new cases of COVID-19 to 490,000 last week, the fourth week in a row that infections have increased, according to a Reuters analysis of state and county data on Monday.