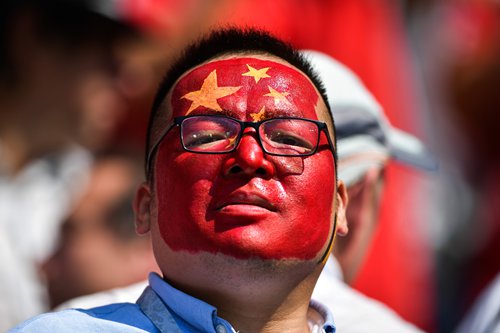 Pictured is a Chinese soccer fan wearing Chinese national flag face painting on Saturday during the group G match between Belgium and Tunisia at the 2018 soccer World Cup in Moscow, Russia. (Photo: IC)

British pop king Robbie William's hit "Let Me Entertain You" kicked off the FIFA World Cup in Russia. However, thousands of miles away, it is China that seems to be making it more entertaining, albeit in a recklessly commercialized way.A Chinese video platform has invited pop stars to act as commentators during the matches. But a controversy was born right at kick-off - the very first match, after a comedian commentator joked about a German soccer player's death. While pop fans are excited about their idols appearing on the screen, many soccer fans blame the unprofessional choice of the platform and how the game has become over-entertaining and over-commercialized in China.Own goalDa Zhang Wei, a Chinese pop singer and comedian, apologized on June 15 for his insensitive comments during the opening match. A day before, he was invited as commentator by Youku, a Chinese video platform, during live broadcast of the match between Russia and Saudi Arabia.When a former CCTV soccer commentator mentioned Robert Enke, a German goalkeeper who committed suicide due to depression in 2008, Da Zhang Wei asked jokingly if Enke "took his own life because he had been benched but was too eager to play.""I did say inappropriate things… I did not know the player's condition. But I spoke without knowing. It was totally wrong," he apologized on his Sina Weibo.The words sparked an outrage among soccer fans on Sina Weibo, with Da Zhang Wei facing severe flak along with Youku, which was blamed for inviting celebrities who do not understand soccer as commentators during the World Cup."The team of commentators of Youku is meant to entertain. But entertainment needs to respect people," a Sina Weibo user complained."I do not understand why Youku had to use pop stars as World Cup commentators," another one said.The 32-year-old Enke, who had been set to travel with the German squad to the 2010 World Cup in South Africa, flung himself under a commuter train in a small town near Hanover in an evening of November 2009, after a long battle with depression, according to a previous report.Enke left behind his wife Teresa and eight-month-old daughter Leila, whom the couple adopted in May after their two-year-old daughter Lara died from a heart infection.Crowded media spacePreviously, CCTV was the only media outlet qualified to broadcast the World Cup on the Chinese mainland.However, this year, Youku became a partner of CCTV and gained the rights to live broadcast and show post-match clips during the tournament, which would allow users to watch all 64 matches on mobile phones or computers.Apart from Da Zhang Wei, Youku also had Jiang Wen, an actor and film director, and Lu Han, a hit K-pop idol, as commentators for the World Cup.Even a popular video game commentator would join Youku's World Cup team, china.com reported.According to china.com, Youku's commentators team is to "take care of those soccer fans who are not that professional" and let them participate in the World Cup, for the love of the game."As long as Da Zhang Wei speaks, I will listen. He is very interesting," a Beijinger surnamed Zhu told the Global Times.The essence of soccer is entertainment, so promoting the World Cup properly with the help of celebrities is good for the popularity of the sport, Wang Dazhao, a Beijing-based sports commentator, told the Global Times on Monday.Money is the goalThe World Cup remains one of the hottest fan pullers in China with celebrities and corporations festooning it with promotions and adverts, despite the Chinese team not making it to Russia. Chinese companies are spending $835 million on advertising during the World Cup, according to statistics from media group Zenith, which focuses on market analysis."But when would we truly respect soccer?" a We-media writer Xiao Yu asked."World Cup is played once in four years in which soccer is related to the glory of a nation. The phenomenon of over-entertainment in China is a violation of the spirit of sport," Zhu Wei, a professor at the China University of Political Science and Law, told the Global Times.Soccer can be of educational value once you understand it deeply, but unprofessional commentary could hardly benefit the game, Wang added.FIFA is trying to make soccer fairer and more positive by introducing new technology and cracking down on corruption, Zhu said, noting that Chinese soccer should also follow the trend instead of only making it more entertaining and commercial.In 2015, China implemented a reform plan to get 50 million children and adults to play soccer by the end of the decade, with the ultimate goal of becoming a "world soccer power" by 2050.