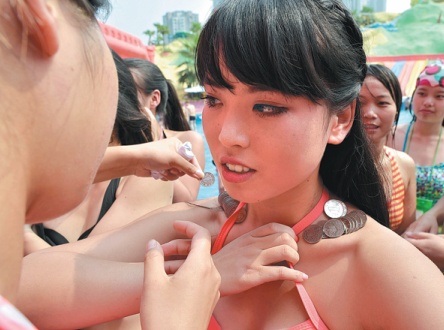 A woman takes the "collarbone challenge" at a park in Chongqing to demonstrate her svelte figure. (Photo: China Daily)

The pose requires women to lie facedown on the floor, with their thighs on a chair and their feet in the air to form a basic Z shape.

It imitates illustrations in Japanese manga cartoon books that emphasize curves, flexibility and a slim waist.

On March 23, Yang Mi, a well-known 34-year-old actress with more than 110 million followers on Weibo, shared a photo of herself adopting the pose.

Yang was followed by Zhang Yifan, a 21-year-old member of an idol group, who posted her own version later the same day.

The challenge quickly became one of the best-trending topics on Weibo, prompting numerous women to imitate the pose.

Though Yang's post initially attracted many likes and complimentary comments, it was later deluged by criticism.

Many medical influencers pointed out that the posture was unnatural and could lead to injury.

Sun Yueli, an orthopedist in Shanghai, commented that it would probably cause muscle strain and raise the risk of lumbar degeneration in the long term.

In an apology issued the following day, she said she had merely been curious about the challenge and was sorry for her "thoughtless" behavior.

It wasn't the first time that a challenge focused on female body shapes had gone viral on Chinese social media.

In 2015, the "bellybutton challenge" became a hit-in it, women touched their navel by reaching behind their back and around the other side.

Meanwhile, the "A4 skinny waist challenge" encouraged women to compare their waists to the width of a standard A4 sheet of paper.

Later, the "collarbone challenge" required young women to stack as many coins as possible on their collarbones to demonstrate their lack of body fat and emphasize their jutting bones.