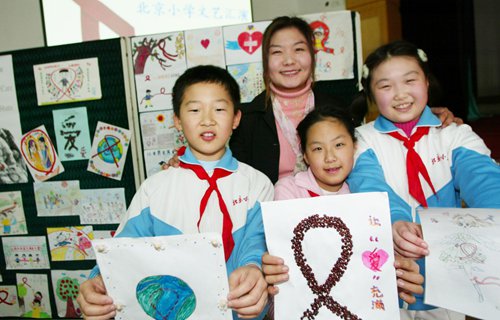 A high school boy tempted by pornographic photos, online sex dating information and advertisements for illicit drugs on social media had sex with an adult he recently met on the platform.

The student claimed that the platform he registered on has many primary school and high school students.

Fearful of being infected with HIV, he recently turned to Zhang Beichuan, a leading expert on HIV intervention and a sexologist at Qingdao University, for help.

Young adolescents, especially young males who have sex with males, are among the groups at highest risk for HIV infection, and the group has been growing quickly in recent years with the popularity of social networking, according to Zhang.

Experts on HIV said that the popularity of the internet has challenged the prevention and treatment of young people with HIV/AIDS, and the experts called for joint efforts from the country's health and education department, internet regulators and parents.

The number of new HIV cases for people between 15 and 24 years old in China increased from 12,819 in 2012 to 19,384 in 2017, and Chinese students in 82 percent of the newly reported HIV or AIDS cases in 2017 got the virus through same-sex activities, Han Mengjie, a senior official of the Chinese Center for Disease Control and Prevention (CDC), said during the 5th National Conference on HIV/AIDS in Kunming, Southwest China's Yunnan Province in September.

Most at risk group

A survey of 8,771 young people aged between 15 to 24 years old conducted in 2017 by All In, a new media platform run by the China HIV/AIDS Information Network, showed that 1,177 of them had sex with people they met on social media. Among the 1,177 young respondents, a majority are boys, who had sex with the help of social media. Some 65 percent had one to five online sex partners in one year. About 100 of them had six to 10 online sex partners, and 39 had over 20 sex partners. The survey also found 23 percent of them did not use condoms during their most recent sexual encounter.

The use of illicit drugs further complicates the spread of HIV infections among young people.

A recent CDC survey of 1,058 male students from 15 to 19 years old who engaged in same-sex sexual activities in Beijing, Tianjin and Guangzhou found that more than half of these surveyed male students used various kinds of medicine and illicit drugs during sex, Liu Hui, a research fellow and senior official with the CDC, said at the conference in September.

Zhang believed that many young boys who had sex through online dating were manipulated by adults.

According to Zhang, some 90 boys under 16 years old in China in 2017 contracted HIV through same-sex sexual behavior, and many cases involved HIV-positive adults knowingly infecting young people.

"We cannot blame young people for high HIV infection rates, and it's a social problem which was caused by a lack of sexual education from schools and parents and insufficient management of the internet," Zhang said.

Regarding social media's responsibility in HIV prevention of young people, Blued, a popular gay app, said that related platforms should restrict juveniles' use, and introduce HIV and sex related education and reminders to its young users, according to a statement Blued sent to the Global Times on Tuesday.

The majority of Blued's users are young people from 18 to 24 years. It offers free HIV tests and consultation in several major cities including Beijing. Young people under the age of 18 are not allowed to register for the application, Blued said.