Driving all the way to the east from city center of Yinchuan, capital city in Northwest China's Ningxia Hui Autonomous Region, on the eastern banks of the Yellow River, millions of midnight blue solar panels that stretch to the horizon would suddenly come into view on the slopes of gullies, like a blue ocean.

All that sunlight absorbed by the more than 2 million photovoltaic (PV) panels is converted into electricity that flows into the grid, creating the world's largest PV power plant and powers cities across the country.

Under the panels are also planted goji, which with the solar park together turned the once deserted land into an "oasis" and helped locals to lead better lives.

From a desert to an 'oasis'

Standing in the middle of the farm, it might be hard to imagine the now vibrant solar park, was once a barren desert seven years ago. 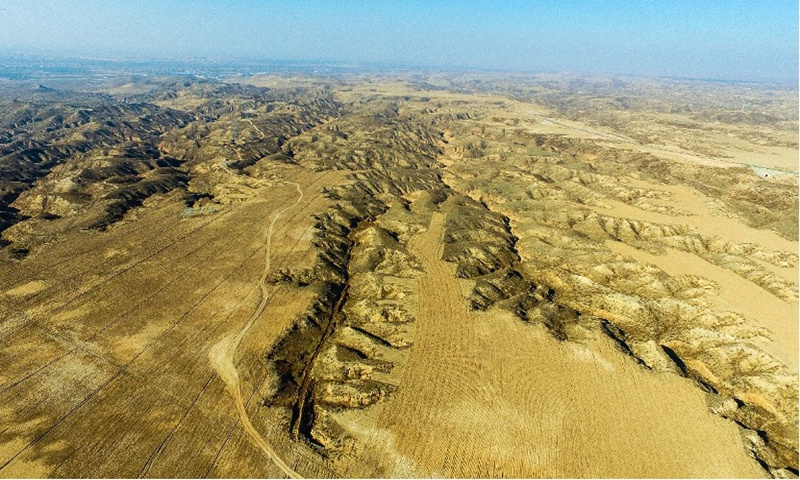 The solar park was once a barren desert. Photo: Courtesy of Huawei

In 2014, following a national call for building a sustainable China, Yinchuan began to carry out sustainable ecological management of the arid land on the east bank of the Yellow River, China's "mother river" known for thousands of years for its heavy concentrations of silt and sediment.

"To tackle the deserted land, the first thing to do is to plant alfalfa to improve the soil," Yang Zhusheng, a local famer told the Global Times on Tuesday, adding that before, the wind and sand were so heavy that people cannot even open their eyes.

After soil quality improved, goji berries were then planted - a kind of herbal medicine and a business that stretches back 1,000 years in Ningxia. Then in 2016, to make full use of the land, over the goji plantation, Huawei Smart PV supported the Ningxia Baofeng Energy Group in building a solar power system, which can also conserve energy and reduce emissions.

Through all these efforts, the vegetation coverage has now increased from 30 percent to 85 percent, which has also significantly improved the regional climate. As of the end of December last year, compared with traditional coal power station, the solar farm is estimated to reduce emissions of CO2 by 2.047 million tons, equal to planting around 89 million trees.

According to staff from the solar park, apart from electricity generation, due to the need to maintain the PV panels, weeding, sprouts, pruning, fertilizing, and picking of goji berries, about 80,000 people are employed in the area. Each farmer can increase income by more than 40,000 yuan ($6,132.2), which also provides a channel for nearby farmers to increase their income.

Aside from the economic benefit, solar PV power generation is also one of the top 10 targeted poverty alleviation projects in China. Since 2014, the country has formulated relevant plans, introduced fiscal, financial and pricing policies, strengthened power grid building and operation services, and promoted various solar photovoltaic poverty alleviation projects funded by the government and implemented by enterprises.

Ningxia, with its high altitude, abundant levels of sun, and high radiation intensity, is one of the areas that showcase how solar panels can indeed lead people to live better lives, in an efficient and sustainable way.

Liu Keyin, deputy secretary of the CPC Committee of Hongde village in Hongsipu District, told the Global Times that local solar station has brought stable income to the village for three consecutive years, which was used to help the disabled, disadvantaged groups, and families with extremely serious diseases, and subsidize college students.

By the end of 2020, the per capita disposable income of farmers in Hongde village has already reached 10,686 yuan.

"Poverty alleviation is just a first step, we are highly motivated now, and after five years, you will see an even better picture," a local resident told the Global Times on Tuesday.

The core equipment of a solar power station is solar panels and inverters, and most poverty-alleviation solar parks in Ningxia are using inverters from Huawei, as well as a complete set of Huawei's smart PV solutions. 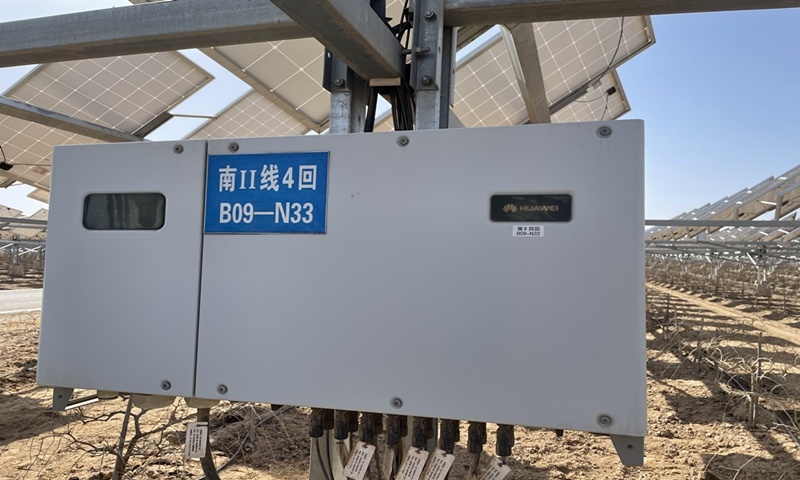 "Huawei's smart PV solution can allow the solar panels to track the sun like a sunflower, ensuring they are always angled toward the sun, which in turn greatly improves power generation compared to traditional PV power plants," Yan Jianfeng, a technician from Huawei smart PV department, told the Global Times on Tuesday.

One inverter can connect about 160 solar panels. It can transmit the operation status of the entire power station to the cloud through sensors, and then use big data analysis and algorithms to make accurate diagnosis and guidance for the operation and maintenance of the power station, Yan introduced.

With the smart solution system, only about 30 staff are needed to check and operate about 2 million solar panels in the farm, Chen Sikang, an onsite operator of the solar farm, told the Global Times on Tuesday.

According to Huawei, it has so far shipped more than 160 gigawatts of solar energy worldwide, which is widely used in more than 60 countries and regions, serving education, medical care, sports, transportation, agriculture, animal husbandry and fishery, modern manufacturing among other industries.