Solidarity demonstrated in support of national security legislation for the SAR 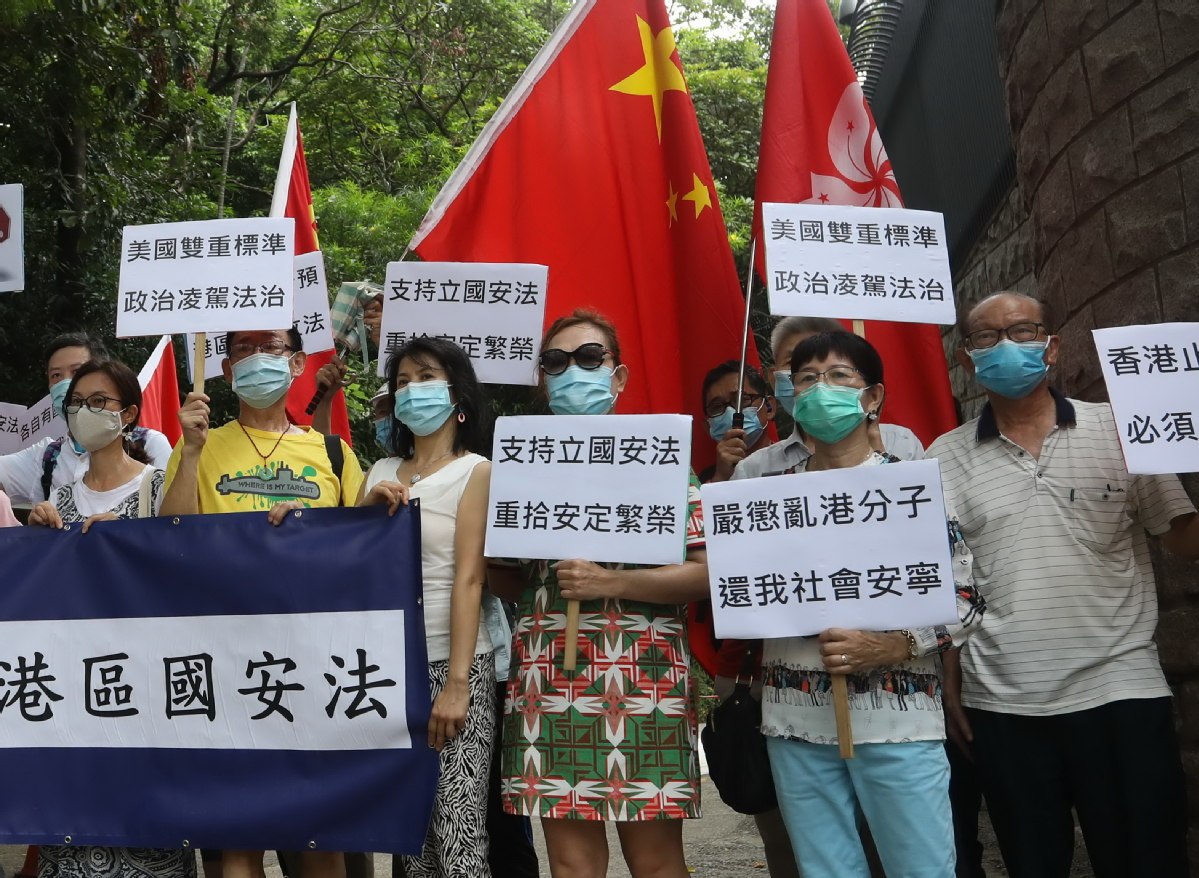 Hong Kong groups protest outside the United States consulate general in Hong Kong on Friday over a new US bill that would sanction those supporting the national security law for Hong Kong. They criticized what they said is US meddling in China's affairs. Protesters expressed support for the national security legislation as a way to return social stability to the city. (Photo: China Daily)

The Hong Kong Special Administrative Region government on Friday expressed strong opposition to the passage of the Hong Kong Autonomy Act by the United States Senate.

"We urge the US Congress to immediately stop interfering in the HKSAR's internal matters. The act and the so-called 'sanctions' are totally unacceptable and will only harm the relations and common interests between Hong Kong and the US," a government spokesman said.

"Any 'sanctions' imposed under the act will not create an obligation for financial institutions under Hong Kong law. We, however, urge the US to act responsibly by refraining from taking measures that may potentially affect the normal operations of financial institutions and the vast number of customers they serve," the spokesman said.

Academics and residents in Hong Kong also lambasted what they called the latest move by the US to meddle in the city's internal affairs.

The chorus of condemnation came in response to the US Senate passing the act, which requires the sanctioning of individuals and companies, including SAR government officials, for enforcing the pending national security law and police officers for stopping protests.

To become law, the act must also pass the US House of Representatives and be signed by US President Donald Trump. On China's part, this is regarded as a move by Washington to push back against the decision of China's top legislature to tailor a national security law for the HKSAR.

Lau Siu-kai, vice-president of the Chinese Association of Hong Kong and Macao Studies, a leading think tank on Hong Kong affairs, said the US is less likely to actually take strong actions against Hong Kong, considering its own enormous economic interests in the city.

"Up to now the US government has not imposed any sanctions on Hong Kong or the mainland because it's also concerned about counter sanctions from Beijing," said Lau, who described US politicians' remarks targeting China's Hong Kong policy as "empty rhetoric and empty threats".

The sociology professor expected rising hostility from US politicians against China in the run up to the upcoming US congressional and presidential elections. "The US government already has a lot of legal weapons against Hong Kong. One more act does not make much difference."

Tian Feilong, executive director of the Center for Legal Studies in One Country Two Systems at Beihang University in Beijing, said the move clearly illustrates the logic of hegemony in US diplomacy, as well as its attempt to interfere in another country's domestic affairs.

"American enterprises in Hong Kong will suffer if the act is passed in the end as the sanctions for sure will strike a blow to their business," Tian said. More than 1,300 US companies now have offices or regional headquarters in the city.

The Democratic Alliance for the Betterment and Progress of Hong Kong, the largest party in the city's legislature, denounced the act as an escalation of US meddling in the affairs of the Hong Kong SAR.

Hong Kong lawmaker Holden Chow Ho-ding of the alliance said the US has applied double standards when meddling in China's national security legislation, which is designed to protect Hong Kong residents and safeguard national interests.

Top US officials have repeatedly stressed that the nation's tough handling of racism-related riots in its own backyard was intended to protect the safety of its citizens, Chow said.

The Hong Kong party strongly urged the US government to give up on such "fatuous acts that harm both sides".

Dozens of Hong Kong residents on Friday protested against the bill at the US consulate general in Hong Kong. They condemned the US for placing politics over law and acting against international norms by attempting to derail China's own security legislation for Hong Kong.