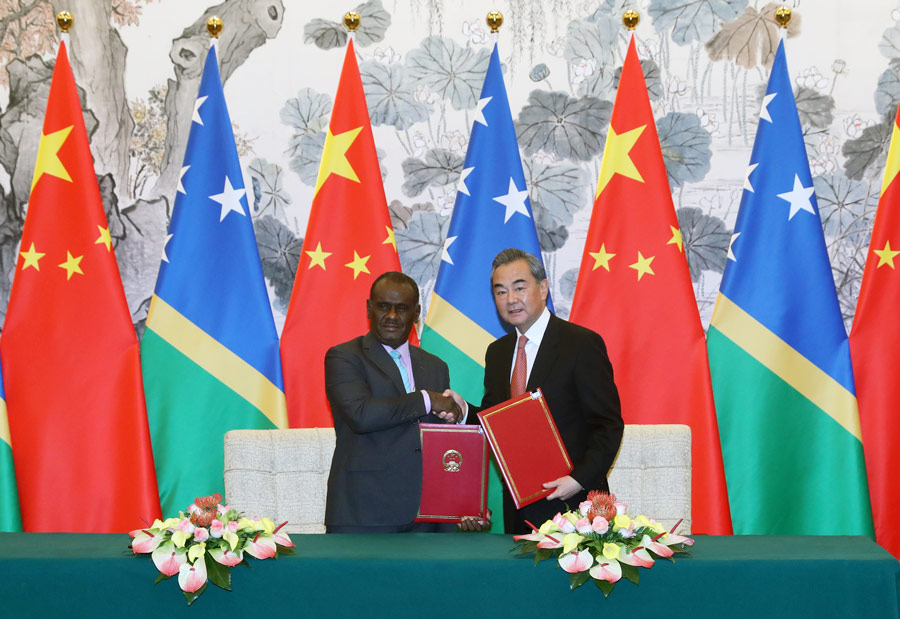 State Councilor and Foreign Minister Wang Yi said the establishment of diplomatic ties between China and the Solomon Islands conforms to the interests of both sides, and expressed hopes that bilateral relations could serve as a highland of mutually beneficial cooperation and a model of mutual trust between China and island countries.

The visiting foreign minister made the remarks when he met Solomon Islands Acting Governor-General John Patteson Oti on Thursday in Honiara. The country is the first leg of his 10-day tour of Pacific island nations and Timor-Leste.

China has always advocated the equality of all countries regardless of their size and democracy in international relations, and opposed bullying in all forms, Wang said.

China respects the Solomon Islands in developing friendly relations with other countries in the world, Wang said, adding the establishment of diplomatic ties with China has added a friend and a sincere, reliable partner for the island nation.

China will fully support the successful hosting of the 2023 Pacific Games and complete China-assisted projects as scheduled, he added.

For his part, Oti said both the Solomon Islands government and its people attach great importance to relations with China and believed the visit of the Chinese delegation would inject fresh impetus to cooperation between the two countries.

He thanked China for providing valuable support for the Solomon Islands' infrastructure construction and fight against the pandemic.

The China-built stadium for the 2023 Pacific Games would help Honiara host a large-scale international event for the first time, he said, which enables athletes to compete with those from other countries on the soil of the country, he added.

Oti said the Solomon Islands looked forward to further deepening cooperation with China in various fields and bringing more benefits to its people.

As a member of the international community and a member state of the United Nations, he said Solomon Islands is willing to strengthen coordination and cooperation with China in multilateral fields.