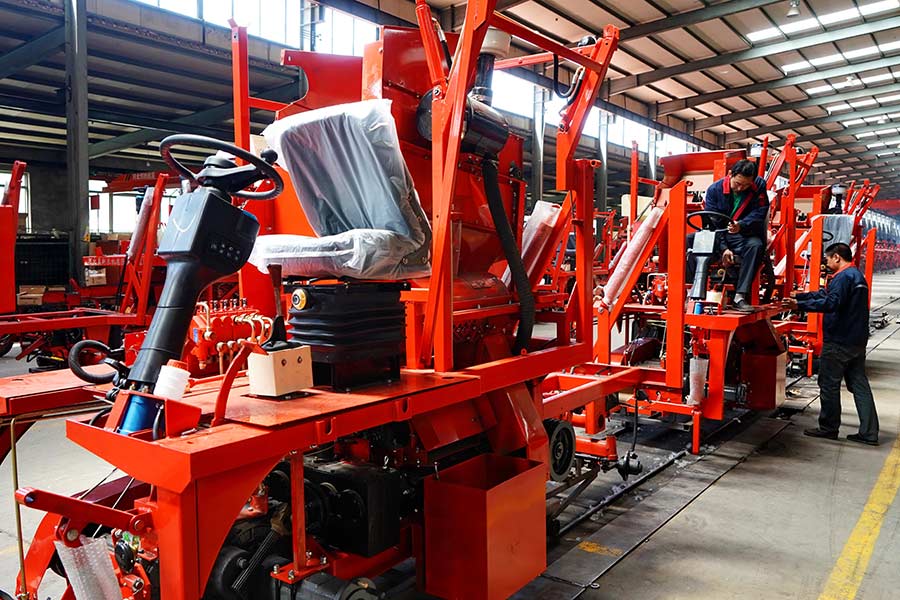 Staff work on the production line of an agricultural machinery manufacturer in Ningjing county, Hebei province, on May 22, 2018. (Photo: Xinhua)

Although China's A-share market slid in 2018, companies engaged in sectors like chemicals, electronics, machinery and medicine still managed to generate profits, according to their interim full-year financial results.

The earnings season started on Jan 21. Some 1,436 A-share companies announced their interim results by Jan 20, among which 333 made positive forecasts, according to the Shanghai-based market information provider Wind Info.

Up to 53 chemical companies said their profit increased in 2018, making it the sector producing the strongest performance based on the current numbers.

The whole industry line has been improved and the prices of chemicals also rose last year. These have helped boost the performance of chemical companies in 2018, Fu said.

"Most electronics, mechanical equipment, medicine and electrical equipment manufacturers have advanced their technologies over the past few years. These companies will continue to promise a positive outlook, as it is in line with the ongoing industrial upgrade," he said.

Yang Delong, chief economist at Shenzhen-based First Seafront Fund, said the growth of the above-mentioned sectors is closely related to the positive performance of the entire manufacturing industry. Most of these sectors were sluggish in 2017 and started to pick up last year, he said.

While the benchmark Shanghai Composite Index shed 25 percent last year, which was the biggest slump among all major Chinese capital markets, small and medium-sized enterprises seemed to post a better performance, according to Wind Info.

Some 199 companies listed on the SME board in Shenzhen made positive forecasts, while another 58 listed on its Nasdaq-style ChiNext board also predicted growth.

Zhao Yayun, senior researcher at Beijing-based Housheng Thinktank, said SMEs experienced big difficulties in the first few months of last year. But since October, a number of favorable policies have been introduced, including bond and insurance products offered on the Shanghai and Shenzhen bourses.

So, these companies have weathered some difficult times and started to generate growth, he said.

Going forward, stable growth and risk prevention will still be the key to China's economic growth, said Cheng Shi, chief economist of ICBC International. The economy will start to rebound in the first quarter, and there is high chance it could even post a better-than-expected performance, he said.