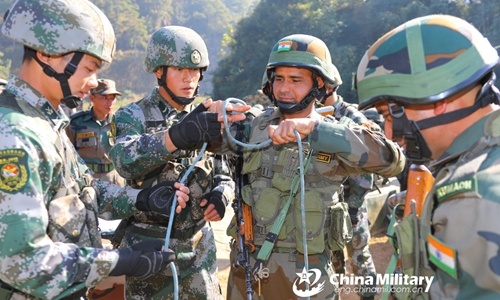 Chinese and Indian soldiers exchange on how to tie a square knot prior to a cliff-climbing training exercise at Umroi Cantonment, capital city of Meghalaya in northeast India, on December 14, 2019. The 8th China-India "Hand-in-Hand 2019" Joint Counter-terrorism Exercise kicked off on Dec. 7, 2019. The 16-day exercise, which consists of three phases of adaptation training, mixed training and comprehensive exercises, mixed Chinese and Indian troops into two groups to jointly conduct counter-terrorism tactical drills. (eng.chinamil.com.cn/Photo by Wang Hao)

Global Times sources have refuted posts on overseas social media platforms claiming that 20 Indian soldiers were kidnapped by the Chinese People's Liberation Army (PLA) in the boundary area with China, saying they are fake news.

Some posts on Twitter on Sunday claimed that the Chinese army kidnapped 20 Indian soldiers on the border areas between the two sides in the south of China's Tibet Autonomous Region. But sources close to the matter told the Global Times that this is fake news.

Similar rumors also circulated in September, claiming that five Indian residents were kidnapped by the Chinese army when the former went out hunting. In fact, these "residents" were Indian intelligence agents who had disguised themselves as hunters. They trespassed the China-India border in September and entered the Shannan prefecture of Tibet, a source told the Global Times previously.

Analysts said that posts by netizens are unreliable, and noted that no such incidents have occurred in the boundary areas between China and India in recent years.

Analysts warned that the fake news, released at a sensitive time during the border tensions between the two countries, could muddy the water and bring about uncertainty to the relationship between the Chinese and Indian militaries.

India and China will likely hold the eighth round of Corps Commander talks this week to de-escalate the tensions along the Line of Actual Control (LAC), Indian media reported.

The 7th round of senior commanders' meetings between China and India was held in Chushul on October 12. The two sides agreed that the meeting was positive, constructive and had enhanced understanding between both sides. They agreed to maintain dialogue and communication through military and diplomatic channels, and arrive at a mutually acceptable solution for disengagement as early as possible.