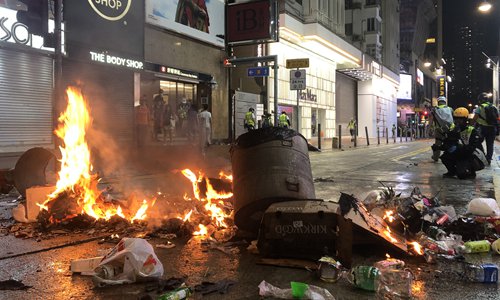 Rioters set fire to garbage in the middle of the road near Hysan Place in Causeway Bay in Hong Kong on August 31, 2019.  (Photo: GT)

In the past two months, violent protesters have been launching unlawful and vicious attacks on the police. But some agitators behind the riots, such as Nathan Law Kwun-chung and opposition politician Mo Man-ching, have left Hong Kong to look for other safe havens while calling on others to remain on the streets.

Reuters reported on August 20 that the number of Hong Kong residents applying for a long-term residence in Malaysia has surged recently, causing fears among Hong Kong and Malaysian media that some rioters may be fleeing to other countries to evade legal punishment for their violent actions.

The Ministry of Home Affairs (KDN) of Malaysia has expressed its dissatisfaction with Hong Kong residents involved in any protests in the country seeking approval for the Malaysia My Second Home (MM2H) program, reported TV3, a Malaysian television channel.

Utusan Malaysia, a Malay-language newspaper, even published a report under the headline "Malaysia is not a place for Hong Kong 'refugees.'"

Some residents from Malaysia reached by the Global Times said that they do not welcome the violent protesters fleeing to their countries.

They also expressed deep concern over an inflow of potential terrorism stemming from the Hong Kong street violence.

Not welcome in Malaysia

A Malaysian program aimed at attracting wealthy foreigners to live there has drawn 251 applications from Hong Kong residents this year, compared with 193 that were approved last year, a government official was quoted as saying by Reuters on August 20.

MyExpat, an agency that advises expatriates on Malaysia's program, said the number of its Hong Kong clients had surged in the past two weeks, but gave no figures, Reuters reported.

In response to a written interview request from the Global Times, MyExpat said that they facilitate and process employment pass applications via an online system, and they act on behalf of the Immigration Department of Malaysia.

Tourism, Arts and Culture Ministry secretary-general Datuk Isham Ishak gave a public clarification that Malaysia has not seen a spike in the number of applications for the MM2H Program from Hong Kong.

But he said that "we will do background checks to ensure they are not terrorists taking this opportunity to come to Malaysia for their (own) reasons," according to the Star, an English-language newspaper in Malaysia.

He explained that the applications would be scanned by the government with the cooperation of Interpol, TV3 reported.

"It is not a spontaneous matter, where you can simply apply for the program just because you want to run away from your country," the official was quoted as saying by New Straits Times, an English newspaper in Malaysia.

"Malaysia becomes a good candidate place for many people from Hong Kong, because of its closeness to Hong Kong and mix of Eastern and Western values, for many who hope to be liberated from unaffordable housing prices, which partly contributed to the chaos," Lin, a real estate agent in Malaysia, told the Global Times.

"But we will indeed be more cautious about signing up customers in Hong Kong during this period [of unrest]."

"The statement of the Malaysian government fully reflects that Malaysia has always followed the one-China principle and opposes separatist activities. Malaysia has always regarded China as a friend and attaches importance to its relations with China," Lum Chih Feng, a senior Malaysian journalist and commentator, told the Global Times.

"Therefore, on the current situation of Hong Kong, the Malaysian government always believes that this is China's internal affair and should not interfere," he said.

This is not the first time that Malaysia has barred entry to Hong Kong radical protesters.

Malaysia denied entry to Leung Kwok-hung and Joshua Wong Chi-fung, student leaders of current violent protests and Occupy Movement in 2015, and put Wong on a blacklist for fear of harming the country, the New York Times reported.

Lum Chih Feng observed that Malaysia's ban on separatists was interpreted by many as a sign of government concern that Wong's radical views might affect the solidarity of the Malaysian Chinese community.

"Many Chinese communities in Malaysia have been denouncing the violent protests in Hong Kong, believing that their aims have gone far beyond the extradition bill. The inflow of lawbreakers into Malaysia may bring unstable and dangerous factors to local society. Violators and terrorists are absolutely not welcomed by foreign communities," Alex Chuah, head of the Association of Belt and Road Malaysia, a non-governmental organization that promotes cooperation between China and Malaysia, told the Global Times.

"Malaysian police also have zero tolerance for criminal groups and the Malaysian people have a lot of confidence in the police," he stressed.

The current situation in Hong Kong also raised concerns in other countries in Asia.

Singapore's education ministry has advised the city state's six government-funded universities to pull the plug on student exchange programs with their Hong Kong counterparts as the turmoil in Hong Kong continues, according to South China Morning Post, a Hong Kong-based newspaper.

They followed an advisory issued by the Ministry of Foreign Affairs (MFA) on deferring "non-essential" travel, reported Today, a Singapore English newspaper.

Parents and some net users applauded the ministry's move. Many suggested on social media that the universities and government should halt all exchange activities to Hong Kong until the tensions end.

"Not all but some students may become badly influenced in Hong Kong and come back as rioters and terrorists. That will be a nightmare for many Singaporeans..." a Singaporean netizen Esther Lee posted on his Facebook account.

The identity crisis of some young people in Hong Kong also raised discussions in Singapore.

During an interview with the People's Daily overseas edition's new media platform Xiakedao, Cheng Yung-nien, professor and director of East Asian Institute of National University of Singapore, said that many people who instigate violence in Hong Kong actually have other countries' passports.

Cheng cited remarks from Lee Kuan Yew, the first Prime Minister of Singapore, who used to ask a very simple question: Which country are you a citizen of? Whose passport do you take? If you take a foreign passport, you will not act in Singapore's interest.

It is understandable that violence is more worrying for Asian countries with higher Chinese populations and closer ties to Hong Kong, including Thailand, said an anonymous expert reached by the Global Times.

Many overseas Chinese groups in some Asian countries also spoke on the current situation in Hong Kong, declaring their support for the Hong Kong police and opposing violence.

Boonyong Yongcharoenrat, president of the Thai Yong Chinese Chamber of Commerce in Thiland, condemned the aggressive behavior of violators, suggesting that all kinds of behaviors of radical demonstrators have seriously hindered the normal operation of Hong Kong society, Xinhua News Agency reported.

NHK, Japan's national broadcasting organization, reported on August 14 that the impact of ongoing protests in Hong Kong is also spreading to Japanese companies that are expanding locally.

Warnings around the world

"Hong Kong protest violence beyond any tolerated by West," read the headline to a report in The Australian, a broadsheet newspaper in Australia, on the escalating violence in Hong Kong.

A British student who preferred to be known as Montella told the Global Times that she was concerned Hong Kong has brought up unstable factors that are gradually radiating to other countries.

"Some places in Hong Kong have become big crime scenes. I once went to Hong Kong for exchange, and I cherish the environment there. But now, I feel sorry. I hope this violence does not spread."