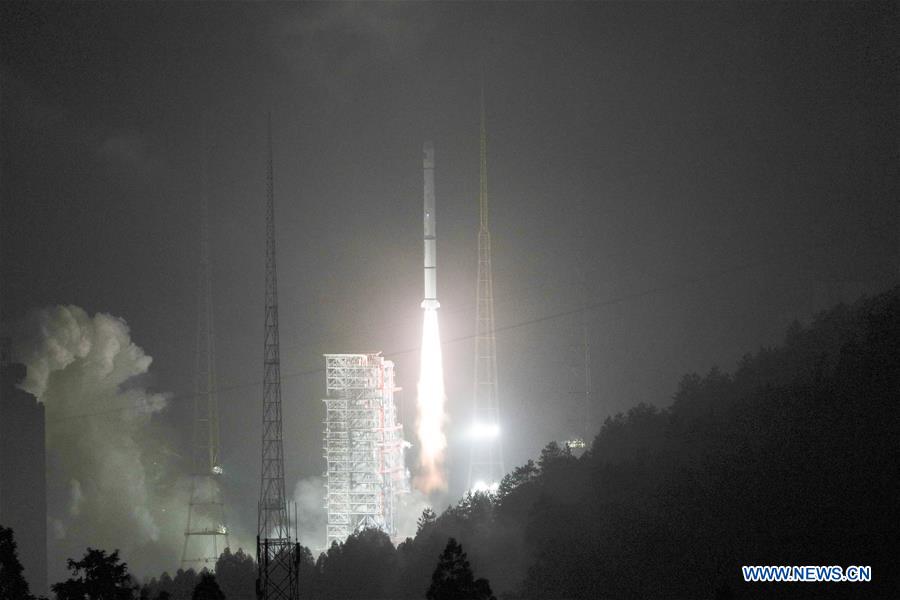 China sends a new Beidou navigation satellite into orbit on a Long March-3A rocket from the Xichang Satellite Launch Center, in the southwestern Sichuan Province, July 10, 2018. The satellite is the 32nd of the Beidou navigation system, and one of the Beidou-2 family, which is the second generation of the system. The launch was the 280th mission of the Long March rocket series.(Photo: Xinhua)

China sent a new Beidou navigation satellite into orbit on a Long March-3A rocket from the Xichang Satellite Launch Center, in the southwestern Sichuan Province, at 4:58 a.m. Tuesday.

The satellite is the 32nd of the Beidou navigation system, and one of the Beidou-2 family, which is the second generation of the system.

The launch was the 280th mission of the Long March rocket series.

China started to construct the third-generation of Beidou system in 2017, and eight Beidou-3 satellites are now in space.

So why launch another Beidou-2 satellite?

"The launch of a backup Beidou-2 satellite will ensure the system's continuous and stable operation," said Yang Hui, chief designer of the Beidou-2 series.

Named after the Chinese term for the Big Dipper constellation, Beidou aims to rival the US GPS system, Russia's GLONASS and the European Union's Galileo as a global satellite navigation system. The project was formally launched in 1994. It began serving China in 2000 and the Asia-Pacific region in 2012.

Since then, the system has provided reliable and free, all-weather and all-time positioning, navigation and timing services to customers in the Asia-Pacific region and has never been out of service, according to the China Academy of Space Technology.

This new backup is not a simple repeat of previous satellites, but has been upgraded to improve its reliability, said Yang.

It carries a rubidium clock, which is the key to the accuracy of its positioning and timing.

When China began reform and opening-up 40 years ago, its satellites mainly used costly imported rubidium clocks. After the launch of the Beidou program, the United States banned exports of rubidium clocks to China.

Sun Jiadong, chief designer of the Beidou system and an academician of Chinese Academy of Engineering, said China must depend on itself.

China's first self-developed rubidium clock was tested on a satellite in September 2006. The performance of China's rubidium clocks was improved on Beidou-2 satellites.

This year will see an intensive launch of Beidou satellites. The system is expected to provide navigation and positioning services to countries along the Belt and Road by late 2018. By around 2020, the Beidou system will go global.

The Beidou-3 satellites can send signals that are compatible with other satellite navigation systems and provide satellite-based augmentation, as well as search and rescue services in accordance with international standards. The positioning accuracy is 2.5 to 5 meters.

The Beidou system will coordinate with other technology, such as remote sensing, the Internet, big data and cloud computing, in future.

In the past five years, the system has helped rescue more than 10,000 fishermen. More than 40,000 fishing vessels and around 4.8 million commercial vehicles in China have been equipped with Beidou, said Beidou spokesperson Ran Chengqi.

China has sold more than 50 million domestically manufactured chips connected to the Beidou navigation and positioning system in the past five years.

By 2020, the value of China's satellite navigation business is expected to surpass 400 billion yuan (about 58 billion US dollars), of which 240 billion to 320 billion yuan will go to the Beidou system, Ran said.