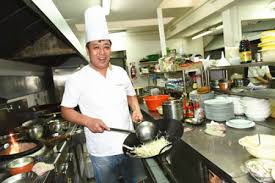 From its location at what can be considered the end of the world, its flavors delight locals and tourists alike who arrive here attracted by word of mouth recommendations.

Ushuaia, capital of Argentina's southernmost province of Tierra del Fuego, is celebrated for its exquisite gastronomy whose ingredients come from the sea and include king crab and hake.

Another of the area's specialties is "Fuegian lamb," which by work and grace of the pasture that the animals graze on, and due in great part to the influence of the marine air, the meat from these animals are the lowest in fat than any other in the world.

These delicacies are available anytime during the year, and although there are restaurants that specialize in their preparation, you can find the dish at any of the city's restaurants including Bamboo.

Bamboo opened three years ago and holds the award for being the southernmost Chinese restaurant in the world.

Here you can sample international haute cuisine as well as the special of the day, which are prepared for the thousands of tourists who, every year, make their way to Ushuaia, many of them Chinese on a layover on their way to the Antarctica Peninsula, located about 1,000 kilometers to the south.

Qu Guiqiu, the restaurant owner known among friends as Daniela, told the Xinhua News Agency, "It is the only Chinese restaurant in the city at the end of the world."

"We are open nine months out of the year, except for April, May and June when the family goes on vacation to China," she said.

"During the summer we serve a lot of tourists and countrymen, and in winter it's more locals," Daniela said with a smile.

In the day to day work, Qu relies on the help and support of cook Xiao Huijun and her husband, Shang Jiabin, who strive to provide the best service to friends and strangers alike.

Although China may be geographically very far away from Argentina, this establishment brings to the southern tip of this South American country the culinary tastes of Asia and mixes them with the local flavors.

And from the corner of streets the southernmost reaches of the country, this restaurant brings, even if for an instant, the palate of Dalian, a city in the northeastern province of Liaoning, China, where the owners came from years before.