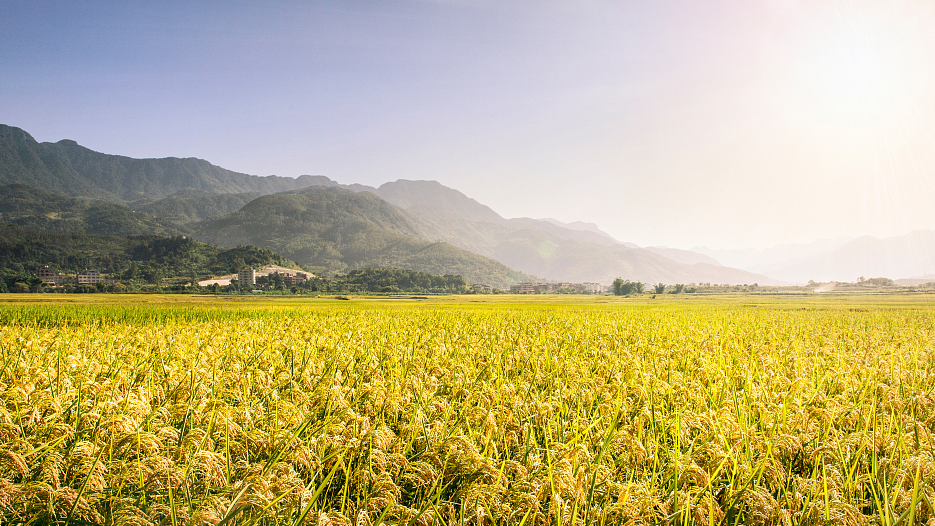 In the face of the epidemic, the ups and downs of the international agricultural market and a series of droughts, China's grain harvest has not come easily. (Photo: CFP)

BEIJING, Oct. 16 (Xinhua) -- As the world embraces the 42nd World Food Day, China, the world's most populous country, is making every effort to ensure grain supply amid growing uncertainties in global food security.

Food security is among the country's most fundamental interests, said Chinese President Xi Jinping. To ensure food security, he has on different occasions stressed farmland protection and improvement, development of seed industry, collection and protection of germplasm resources, as well as supporting farmers and agriculture in all ways possible.

China needs to feed nearly one-fifth of the global population with only 9 percent of the world's arable land. To the president, protecting and improving the quality of farmland means a lot, in order to fill Chinese people's rice bowls, mainly with Chinese grain.

Xi has said that farmland is the lifeline of grain production and the foundation of the sustainable development of the Chinese nation, and urged the implementation of the strictest possible system for farmland protection.

To ensure the country's farmland area remains above the red line of 1.8 billion mu (about 120 million hectares), China has basically formed a legal system for farmland protection, including related provisions in its civil code and criminal law.

At the annual central rural work conference in 2020, Xi stressed the importance of developing high-standard farmland to secure high and stable yields despite droughts and floods.

Through a decade-long endeavor, the country's high-quality farmland will have reached 1 billion mu by the end of 2022, with a stable grain production capacity of over 500 billion kilograms.

He stressed efforts to achieve self-reliance in seed technology and ensure that China's seed resources are self-supporting and under better control.

Under his leadership, the country has made progress in collecting and protecting germplasm resources and building seed banks, while making breakthroughs in seed breeding and selection as well as in the research and development of cutting-edge breeding technology.

So far, the number of national seed breeding and production bases in China has increased to 216, official data showed. These hubs breed or produce seeds for grain, cotton, oil and sugar, among others.

With the help of technology, China's grain production has undergone structural upgrade. Over the past decade, the comprehensive mechanization rates of wheat, corn and rice production have exceeded 97 percent, 90 percent and 85 percent, respectively.

Supported by technological innovations, Chinese farmers can now install small weather stations and soil moisture meters in their fields, supervise crops through mobile applications, and use intelligent tractors and agricultural drones in farming.

To ensure food security, Xi has also urged efforts to implement all supportive policies, protect farmers' enthusiasm for their work, and improve incomes from food production.

Over the past decade, a string of policies have been introduced to bring more benefits to grain planters. China has steadily raised the minimum purchase prices for rice and wheat, provided subsidies for grain planters, and introduced cost and income insurances for major grain producers in main production areas.

The country has encouraged the development of family farms and farming cooperatives. In recent years, over 78 million farming households have received support from more than 950,000 socialized agricultural services organizations.

This year, 40 billion yuan (about 5.63 billion U.S. dollars) has been allocated from the central government budget to ease the impact of agricultural material price rises, agricultural specialists have been sent to fields to assist farms, and various government agencies have strengthened consultations, early warning and disaster relief for floods and droughts.

As an epitome of China's agricultural infrastructure construction, water conservancy projects have seen rapid development. In the past decade, over 7,000 large and medium-sized irrigation areas were built in China, with an effective irrigated farmland area of 69.13 million hectares, accounting for 54 percent of the country's arable land and producing 75 percent of the country's grain.

With hardwork on all fronts, China's grain output had topped 650 billion kilograms for seven consecutive years by 2021, with the per capita grain supply remaining higher than the internationally recognized security line.

This year, China has seen output increases in summer grain and early rice and is expecting another bumper harvest. Such achievement didn't come easily as the country has overcome the impact of last year's rare autumn floods in the north, the late sowing of winter wheat in large areas and sporadic resurgences of COVID-19 cases, and coped with severe heat and droughts in some southern regions.