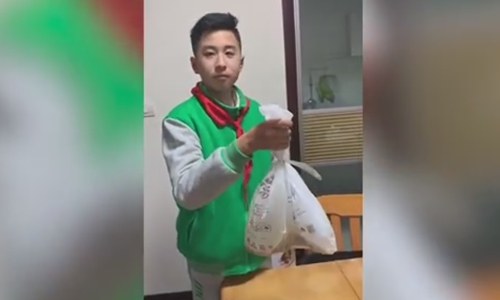 A middle school student in Shanghai appears to have hit the jackpot after inventing a new plastic garbage bag that is helping city residents deal with strict waste disposal rules.

The bag seems to open from the bottom that allows people to dump waste in the appropriate trash bin, in which plastic bags are not allowed. By holding on to a long tie that is part of the bag, messy kitchen waste is easily disposed of, leaving the user holding the dirty plastic bag at arm's length, which can then be dumped in the bin for plastics.

Shi Yuan, a student at Shanghai Wenlai Middle School, said he got the idea after he spilled wet kitchen garbage on himself while trying to dump the waste from an ordinary plastic bag.

Shi got help designing the bag with an extra-long strap that can also be used to tie the bag, from family members and teachers who also helped him contact plastic bag factories.

The bags are now being mass produced and 2 million bags have been ordered. Already they have generated a profit of more than 500,000 yuan, Shi's father told media.

Shi continues to improve his invention for which he has already received a patent.

"We encourage our students to be creative and this boy did a really good job!" Bai Bin, the headmaster of Shi's middle school told thepaper.cn.

Shanghai implemented strict garbage sorting regulations in July, which include heavy fines for those who don't comply. Beijing is set to enforce similar rules in the new year.