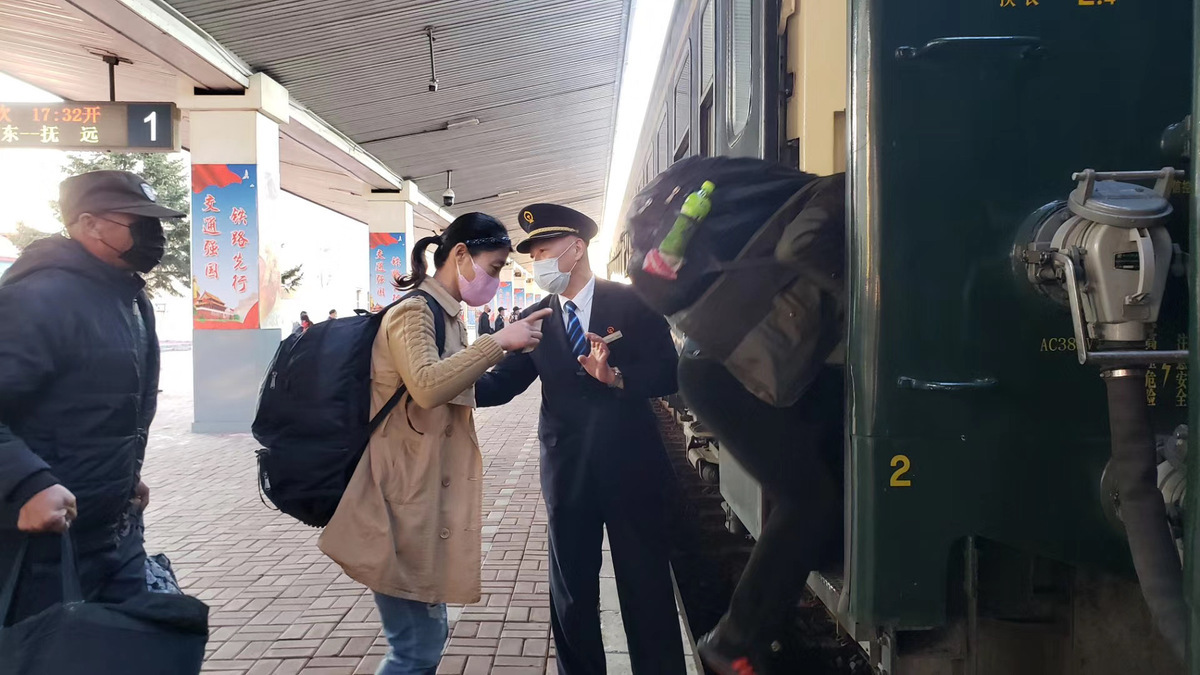 Migrant workers board a special train for agricultural production on Sanjiang Plain in Heilongjiang province on May 5, 2020. The special trains have been in operation every year since 2000 to help bring laborers to the fertile land during the spring farming season. (Photo: China Daily)

A special train carrying migrant workers arrived on Wednesday morning at the Qianfeng Farm on the Sanjiang Plain, a major rice growing area in Heilongjiang province.

Qiang Ying, who rents 40 hectares of rice farmland, picked up 10 workers from the train and brought them to her farm.

"Last year, thanks to the those migrant workers, rice planting was finished in record time, and I had a good harvest," said Qiang, 45.

Now she is looking forward to another harvest with the help of these workers from Suihua, in the central part of the province.

Setting off from the Suihua Railway Station, the train passed several large farms on the Sanjiang Plain such as Jiansanjiang, Qianjin, Qianfeng, Honghe and finally arrived at Fuyuan city.

Because the climate is different on the plain, the best period for planting rice seedlings spans from May 5 to 25.

As there are not enough local farmhands on the Sanjiang Plain, groups of migrant workers descend on the area for three weeks every year. Most of them come from rural parts of Qiqihar and Suihua in Heilongjiang.

Since 2000, when the China Railway Harbin Group introduced the service, the special trains have transported 1.7 million migrant workers to and from the rice production areas in the province.

The special rail line that opened on Tuesday is expected to transport about 10,000 migrant workers by May 10, according to the administration.

But the estimated figure is sharply lower than last year because of the COVID-19 outbreak.

In 2019, two special rail lines－one from Qiqihar, a city in Heilongjiang, and the other from Suihua to Fuyuan－transported 48,000 migrant workers from May 2 to 20, along with two fixed lines from Harbin.

"Since February, the station's passenger volume has dropped to around 600 a day because of the epidemic from the previous 7,000," said Liu Ming, deputy director of Suihua Railway Station's passenger transport section.

"It is expected to rise to 3,000 during the rice planting period."

But the workload of the rail workers in the station has increased sharply.

"Due to the special situation this year, we have worked with surrounding villages and towns in advance, getting passengers' information and preparing tickets before they arrived at the station," Liu said.

"To avoid disorder, we have launched a series of measures, such as building a shelter on the square in front of the station for migrant workers to rest separately, and dispatching workers to lead them to scan health codes and then enter the station and board the trains in an orderly manner," he added.

"We reminded passengers to wear protective masks and get to the station at least one hour and 30 minutes before departure."

After temperature monitoring and safety inspections, migrant workers can board trains through the green channels to avoid unnecessary contact with crowds.

Lin Guixia, 44, a farmer from Ronghe village, Lanxi county, was one of the 876 workers taking the first special train on Tuesday to Qianfeng Farm.

"I have come to the farm every spring since 2017. There are six people from our village on this train this year, and we will do the same work, planting rice seedlings, for the following 20 days," she said.