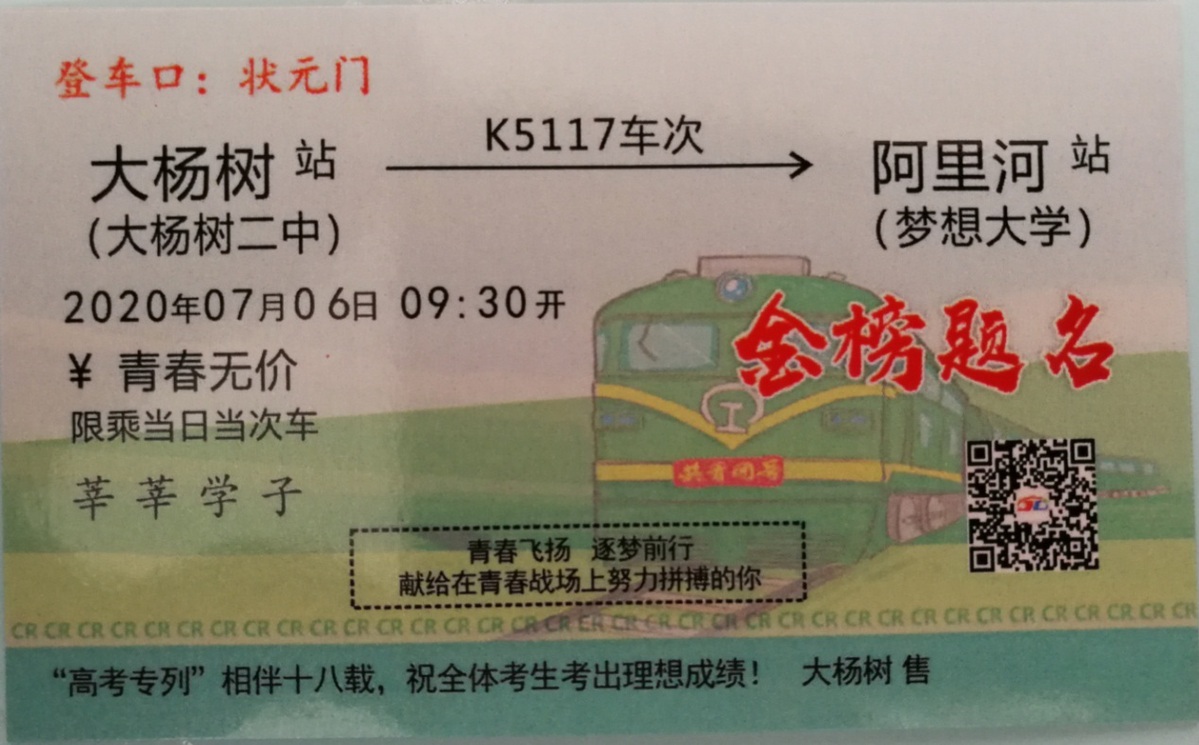 Railway workers prepared a souvenir ticket for each senior student who takes the train from Dayangshu town to Alihe town for the national college entrance examination, known as the   gaokao, on July 6, 2020. (Photo: China Daily)

The special service to Alihe, a town 135 kilometers away on the border between Inner Mongolia and Northeast China's Heilongjiang province, has run each year since 2003, transporting students to the nearest test center for the national college entrance examination, known as the gaokao.

Dayangshu lies in the southern part of Inner Mongolia's Greater Hinggan mountain range and is inhabited largely by people from the Oroqen, Daur and Ewenki ethnic groups.

The town is too small for its own test center, so students travel to Alihe for the exam, which this year starts on Tuesday.

Before 2003, the journey involved a combination of buses and trains, taking more than six hours. Now the direct train takes just two hours.

Even though a national highway built in 2010 has cut the travel time to two and a half hours, many students still choose to take the train, seeing it as a rite of passage.

"My parents decided to drive to Alihe, but I chose to stay with together with my classmates and teachers on the train," said He Ziyi, an Oroqen student from Dayangshu's No 2 High School. "I don't want to miss this journey that will be one of the most unforgettable memories of my life."

Bottled drinking water and several boxes containing emergency medicine have been placed on the special train.

Professional photographers are invited to take graduation photos for students on the train.

Li Baifang, a teacher from He's school, took the first special train for her gaokao in 2003 and accompanied the students to the gaokao this year.

"This train is still a necessity for some poverty-stricken students for its cheap ticket prices," she said. "The carriage environment has been largely improved, with air conditioners upgraded in the carriages."

"Furthermore, the harmonious atmosphere can greatly help ease students' anxiety about the looming exam," she added.

The return service will depart Alihe on Wednesday night, just a few hours after the end of the students' entrance exam.

The route has carried more than 30,000 students between Dayangshu and Alihe over the past 17 years, according to China Railway Harbin Group, which operates the service.