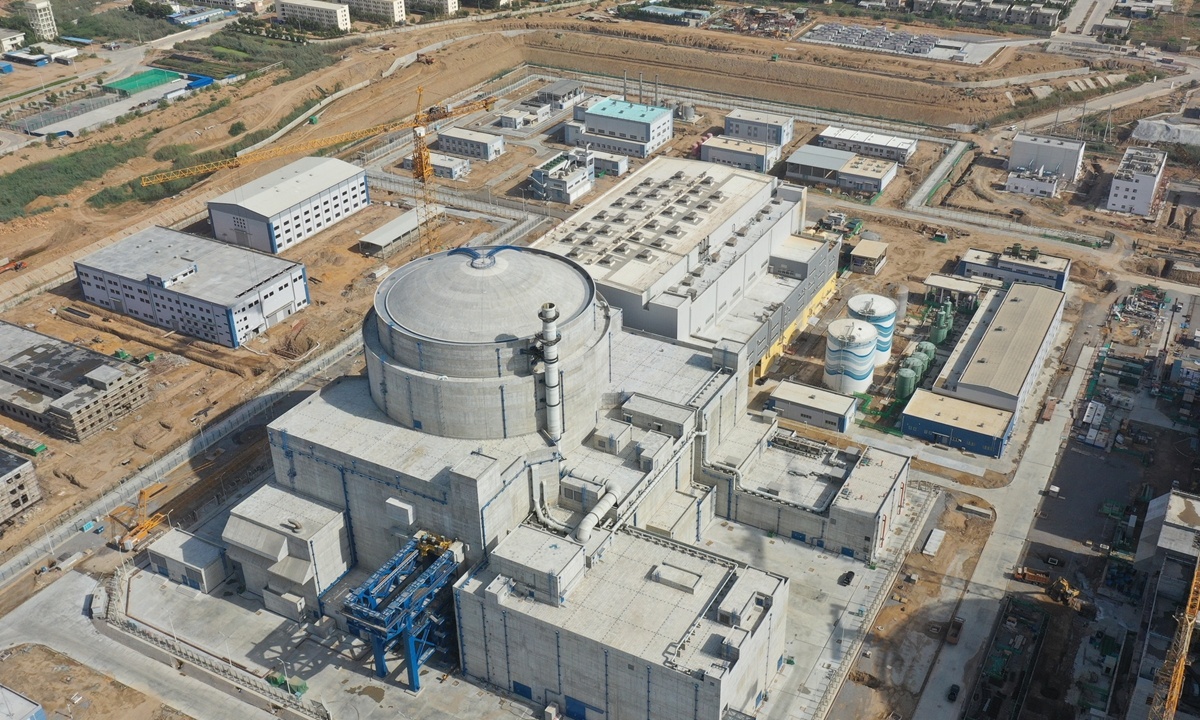 A view of the Karachi Nuclear Power Plant Unit-2 in Islamabad, capital of Pakistan on May 19.(Photo: Xinhua)

Coming to the eighth year since the Belt and Road Initiative (BRI) was proposed by China in 2013 with the aim to build a trade and infrastructure network connecting Asia with Europe, Africa and beyond, the master program has recorded significant achievements made via unremitting efforts, and it has embarked on a journey featured by green and sustainable development.

During a recently concluded BRI forum in Xi'an, capital of Northwest China's Shaanxi Province, more than 200 global political and industry elites from China, the US, Russia, Japan, Kazakhstan, Kyrgyzstan, the United Arab Emirates and other countries shared their views on how to jointly promote the BRI financial cooperation and continue to enrich the connotation of green finance and the development of innovative BRI financial cooperation.

Feng Xingke, secretary general of the World Financial Forum and director of the Center for BRICS and Global Governance, said that to strengthen financial cooperation among BRI members, "we need to raise ambition and boost confidence to support the green and sustainable development along the BRI routes, and to invest in a green BRI." With more and more countries announcing their carbon peak and carbon neutrality targets, the world is entering a new era of green development, with green finance becoming a top priority for BRI financial cooperation.

While delivering a keynote speech via video at the opening ceremony of the Boao Forum for Asia Annual Conference 2021 on April 20 in Hainan, Chinese President Xi Jinping said that the country will build a closer partnership for green development and called for strengthening cooperation on green infrastructure, green energy and green finance.

Ye Yanfei, a senior official from the China Banking and Insurance Regulatory Commission, put forward some suggestions during the forum about delivering BRI green cooperation in practical terms.

He suggested making innovative plans based on the exploration of think tanks and financial institutions, in particular, such plans should not be absent in a pivot across BRI countries and regions.

"Without specific plan, a road map or a timetable, it will become difficult to achieve low-carbon goal, and it has no guidance on our investment overseas," said Ye.

Ye has stated that based on those plans, "we should mull over a batch of model projects around low carbon." For example, "energy infrastructure may be more inclined to renewable energy, whether it is photovoltaic power generation or wind power. There may also be some nuclear power projects or more hydropower projects. For urban infrastructure as well as the manufacturing park, industrial park project, we need to deploy some good energy-efficient products there."

Despite the coronavirus impact, China's overseas investments in countries and regions along the routes of BRI registered $47 billion last year. Renewable energy investments, including solar, wind and hydro, for the first time were the majority of Chinese overseas energy investments - increasing their share from 38 percent in 2019 to 57 percent in 2020, data from Beijing-based research body Green Belt and Road Initiative Center showed.

In 2021, opportunities are seen in investing in more bankable smaller projects that are quicker to implement like solar and wind. Plus, large and often loss-making projects like coal would see losses cut, according to the research body. 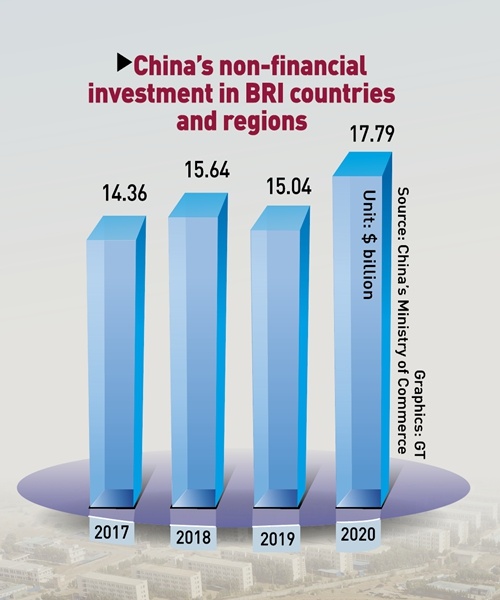 China has maintained an open and welcome attitude toward more countries joining the massive program, to enhance connectivity and practical cooperation, which also offers a golden opportunity to economies hit by the COVID-19 pandemic to rebound soon.

Former Japanese Prime Minister Yukio Hatoyama said during the forum via video that there is no doubt that in today's international relations, China-US relations have drawn the most attention. "China-US confrontation does not come from the difference in values, but from the narrowed gap in national strength." China's nominal GDP equals about 70 percent that of the US and it is estimated that China will overtake the US in terms of GDP by 2028.

China should not leave opportunities for the US and improve its software. For instance, via the BRI, Hatoyama said that it could facilitate the economic development of countries along BRI routes with win-win results and accelerate poverty alleviation in developing countries in a steady manner.

"Although the Japanese government and enterprises haven't declared their stands on BRI, I personally hope that Japan could actively participate in it and contribute to its comprehensive success together with China," he added.

Djoomart Otorbaev, former prime minister of the Kyrgyz Republic, also shared his insights on China-Europe cargo trains, a major driver of BRI cooperation. "The annual number of China to Europe freight trains is expected to grow from the current level of about 12,000 trains to 40,000 to 50,000 trains by 2035."

Last year, the stand-out performance of China-Europe freight trains helped boost the construction of a new development paradigm and facilitate global cooperation to fight COVID-19 pandemic, with a record high 12,400 trips made, up 50 percent from the previous year, according to China's railway operator.

"Chinese firms and business people are transporting the occupations from seashores from Shanghai, Guangzhou, Shenzhen type of area into the more western provinces of China without direct access to the sea so as to lower the cost of production… it became faster to transport the goods by rail, not by sea, to the European markets," Otorbaev said, referring the change as a good opportunity for Central Asian countries to boost local economic development as well as bringing China closer to other parts of the world.