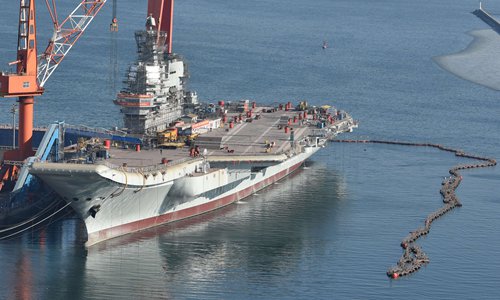 "China can make aircraft carriers of any type," Hu Wenming, general director of construction of China's first homemade aircraft carrier said in November, bringing the topic under the spotlight once again after the ship reportedly hit the water in April.Military enthusiasts were thrilled by Hu's remarks, speculating that China may be building a nuclear-powered carrier equipped with an electromagnetic catapult system for launching fighter jets. The ship, which began construction in 2013, will be China's first homemade carrier. The country's first carrier, the Liaoning, was rebuilt from a Soviet Navy cruiser and commissioned to China's navy in 2012.News and photos of the new carrier have circulated online recently, and Hu has told the media that construction "is ahead of schedule." "China's second carrier will be based on the Liaoning and will be among the world's most advanced, further improving China's research and development of aircraft carriers," Hu was quoted by China Central Television in April as saying.Trial phase"Sea trials could be held at the beginning of 2018. The results of those trials will determine when the carrier is commissioned into the Chinese Navy," said Li Jie, a Beijing-based naval expert. The carrier is currently reported to be undergoing mooring trials, which determine whether its engine and weapon systems are operating properly. The carrier is not as long as the Liaoning, but has a greater height, according to pictures circulated on social media.Military experts said that the new carrier is expected to be 315 meters in length and 75 meters wide. It will also be able to hold more fighter jets and a number of other planes. "The weapons of an aircraft carrier and its battle capability will decide the capability of the aircraft," Hou Jianjun, an expert from an institution that studies the equipment of the People's Liberation Army Navy, told the PLA Daily. Li said that the carrier is expected to carry J-15 fighter jets since "the wings and horizontal tails can be folded," which will save on the limited space available. The fighter jets are also equipped with dual turbofans that will enable them to fly from the deck even if one of them is damaged.Chen Hu, a military expert, said the carrier will carry 10 percent more carrier-based aircraft than the Liaoning and would not be adopting a catapult takeoff system.However, it is believed that China has acquired electromagnetic catapult technology, which can launch fighter jets as well as early warning planes and miniature aerial vehicles.Li believes the carrier may adopt an electromagnetic catapult system.As to whether the carrier will be nuclear-powered, Du Wenlong, a military expert, said that the experience China has gained from making nuclear-powered submarines means this would not present a problem in terms of technology. "The point is whether China needs a nuclear-powered carrier right now," Du said.However, Li said that building a nuclear-powered carrier is an all-round project, referring to problems regarding the safe use of nuclear power."A nuclear-powered carrier cannot be accomplished in a day," said Liu Jiangping, a military expert from the Modern Navy magazine, adding that China should develop its aircraft carriers step by step.Protecting interests"We can accomplish more overseas missions in a more efficient way when an aircraft carrier is commissioned to the PLA Navy," said Huang Jiafu, who participated in two tours of the Gulf of Aden. China is currently using destroyers, frigate and landing ships to perform cruise missions, and PLA soldiers are looking forward to having the aircraft carrier join them, he added.Experts agreed that China needs to develop its maritime power in order to protect its overseas interests as more Chinese enterprises explore overseas markets.China's aircraft carriers should take on more responsibilities and their power and functions are similar to atomic and hydrogen bombs and man-made satellites on the sea, in that they have great deterrent, combat and defense capabilities, Li said."The 21st century is a maritime era. All the great powers are drawing up maritime strategies and developing their navies. China also needs to have maritime powers aligned with its great power status. Having aircraft carriers is the first step to China becoming a maritime power," Hu Bo, an expert from the Institute of Ocean Research of Peking University, said.Yan Xuetong, director of the Institute of International Studies, Tsinghua University, predicted in his book written in 2013 that China will have at least three aircraft carriers by 2023.Some experts believe that as it has taken China just four years to bring its first homemade carrier to the sea trial stage, it is capable of making two or even three nuclear-powered carriers by 2035.