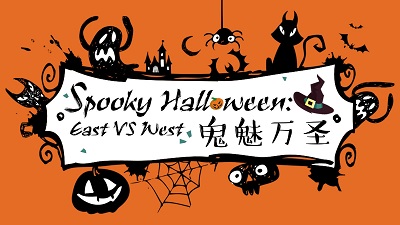 ‍When leaves turn red, witches, ghosts, monsters and other scary creatures make an appearance on the spookiest time of the year -- Halloween. Celebrated on October 31 every year, a day before All Saint's Day, this "haunted" holiday gets millions of people around the world to wear their scariest costume while partying or trick or treating.

The festival, also called All Hallows' Eve or All Hallows' Evening, which means to remember the dead, has gradually developed into an entertaining celebration, and has become one of the most popular festivals among children and adults with its traditions for fooling around in costumes.

This spooky festival has long been associated to many English-speaking countries. But apparently, dressing up in scary costumes and "trick-or-treating" to delicious food and fancy parties are now practiced worldwide.

There are surely more ways to celebrate it. So how do people around the globe celebrate it?

Halloween in many Spanish countries is known as "El Dia de los Muertos," the Day of the Dead, which is a three-day event that takes place every year from October 31 to November 2. For Mexicans, it's the time of the year where they put offerings such as flowers and food next to pictures of family members who passed away.

Families in Chile, meanwhile, visit the cemetery and place flowers and other stuff to decorate the tombs of their loved ones.

Although Halloween is not a major holiday in Brazil, there are still local celebrations that include colorful caipirinhas (made with cachaça, brown sugar and lime), batucadas (a Brazilian rhythm technique made by percussion instruments) and colorful parades with drum music.

German people are not so fond of Halloween but they do have some specials to celebrate it, which includes watching horror movies and taking walks at night in spooky places like graveyards and the woods.

In Greece, they do "The Apokrias," or the carnival, which takes place in February when friends get together and knock on other friends’ doors to make them guess who is hiding behind the dress-up and the mask.

On the other side of the world, Chinese people also have their own celebration. Near the end of the summer – on July 15th in the Chinese lunar calendar, Chinese people celebrate the Hungry Ghost Festival – a time many believe the gates to the spirit world open and ghosts come out to visit the living. Families place a sumptuous meal on the altar and create paper offerings that look like money or personal items. These will then be burned to be sent back into the spirit world.

Halloween season means big business for some companies in China.

Months before the Halloween, the workers in Shenyang Chuangqi Amusement Equipment Co. Ltd. have been working to produce as many props and costumes as possible to sell to the world. The company is well-known for entertainment equipment manufacturing, and its products are exported to the US, Southeast Asia and Europe.

Another go-to place for retailers is Yiwu, the world's largest small commodities market where retailers from all over the world go to refuel. The small town supplies 80 percent of the world's Halloween/Christmas decorations and 60 percent of children's toys.

A 2016 report showed that 61.9 percent of Americans have plans for celebration, according to qugood.com, a site dedicated to cross-border commerce. Aside from handing out candies (70.9 percent), home/yard decorations and costumes top the celebration plans with 48.6 percent and 47.1 percent respectively, among other activities.

Children dress up in Halloween costumes in a kindergarten in Shanghai. Photo: globaltimes.cn

Yiwu's output is not just for Western party-goers. The festival has seemingly received wider acceptance among the Chinese, kids especially. Parents were asked to prepare costumes and carve pumpkin lanterns for their children and attend the celebratory activities in school.

While some treat it as a bonding moment between parents and children, others went on Weibo, China's Twitter-like service, to complain that it has gone too far.

"To be honest, I don't understand. Why the fuss about the Halloween? The kindergartens and other learning centers are holding various activities to celebrate. But why do few people talk about the Chongyang Festival (a day to pay respects to senior citizens)? Shouldn't we be promoting the traditional festivals to the younger generation?" asked @rLittleWhitey.

Parents go on Weibo to complain that some kindergartens treat the Halloween too seriously. /Screenshot via Weibo

The debate on celebrating Western festivals, such as Halloween and Christmas, has been going on for years. In the "Two Sessions" earlier this year, Zhu Jun, a well-known anchor from China Central Television (CCTV), proposed to ban such holidays in schools and kindergartens. But the proposal didn't result in any practical actions from either the state or provincial-level.

Experts say the popularization of Western holidays is partly due to globalization. Another reason is that young Chinese thought that those festivals are more entertaining.

Also, Chinese people celebrate Western festivals just to socialize and party, not knowing the real meaning behind the tradition, said Xiao Fang, a professor at the Beijing Normal University.

He also suggested that traditional Chinese festivals should be celebrated in more interesting ways to attract more children and teens.

Instead of treating Western festivals as cultural erosion, the bigger question is how to keep the traditional culture live and shine amid the fast-globalizing world.