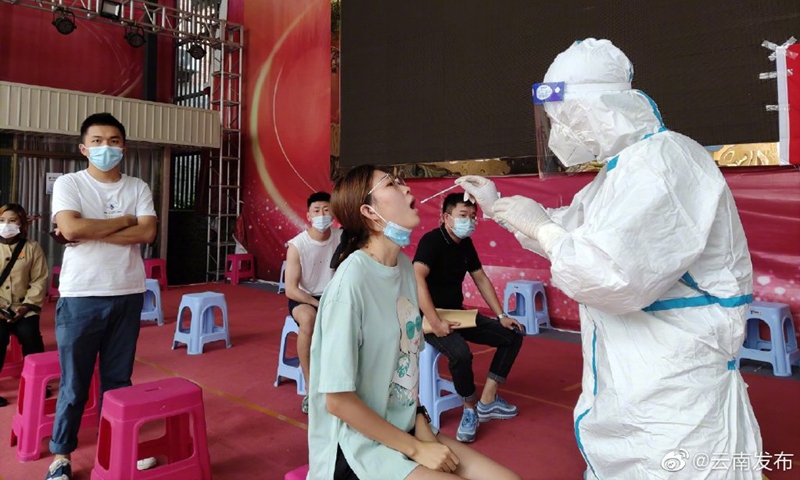 Ruili, the border city between China and Myanmar, reported another three domestic confirmed COVID-19 cases on Thursday, the only three that the entire country reported on the day. Public health experts said their confirmation doesn’t represent new epidemic resurgence in Ruili but these sporadic cases highlight the blind spots and complexity of border epidemic control.

Two cases are Myanmar nationals and one is a two-year-old Chinese child. They were close contacts of a previous confirmed case on August 11. The three tested positive for COVID-19 when they were in a designated quarantine place for medical observation, according to Yunnan Provincial Health Commission on Thursday.

Wang Peiyu, a deputy head of Peking University's School of Public Health, told the Global Times on Thursday that these new cases are sporadic cases, following cluster outbreak that started from July 4. As new cases are within the closed-loop management, their confirmation doesn’t represent new epidemic resurgence in Ruili. However, it does show the existing loopholes and complexity of border epidemic prevention and control.

Ruili has yet to control the recent flare-up that started on July 4. It imposed quasi-lockdown measures to curb the virus from crossing its region. Despite those efforts, there are still blind spots in the city’s interior epidemic control measures, such as contaminated trash, or faeces not being properly dealt with or their mass nucleic acid tests not covering all residents, Wang said.

The Global Times learnt from a government source that some local residents were found to have escaped mass nucleic acid tests when they should have received them and some border stowaways sneaked out of the city to avoid legal punishment.

In addition, Ruili also reported seven confirmed imported cases, six of whom returned to China from Myanmar and one from Laos.

Previously, a local source said many people who had engaged in cross-border telecommunication and internet fraud cases returned from neighboring countries as they decided to confess their crimes. After they reached the Chinese border, they underwent closed-loop management.