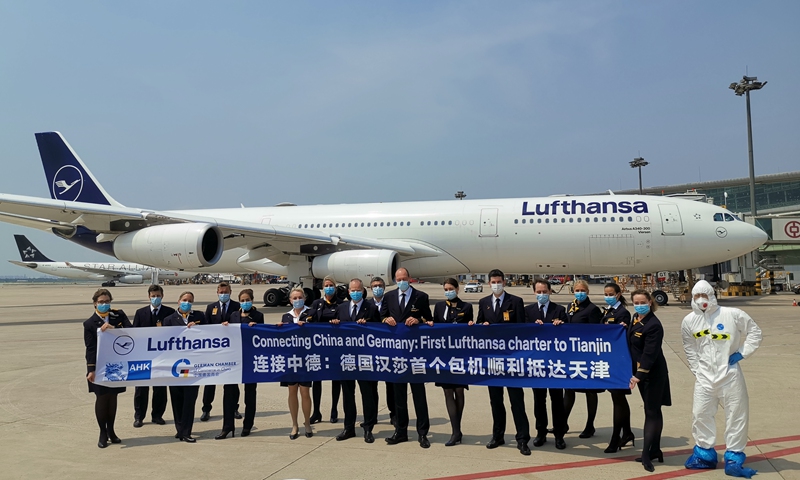 A passenger on the first chartered flight from Germany to China was tested positive for the coronavirus upon arriving in North China's Tianjin, sparking public concerns of imported cases causing a domestic resurgence, but a virologist and public health expert noted that such a case is rare and closed-loop management will avoid any danger to the public.

The German engineer flew on LH342, which is part of the China-Germany "fast track" arrangement to bring German managers, employees and family members back to China to resume work. He arrived in Tianjin on Saturday. The quarantine period vary depending on policies in their destination cities.  According to German newspaper, these German workers will be quarantined for only 48 hours upon arrival in Shanghai. Previous reports showed a passenger on the flight to Tianjin revealed on his Twitter that they had been required to be quarantined for two weeks.

The passenger was confirmed to be an asymptomatic carrier on Sunday and was transferred to a hospital for further observation, according to the Tianjin Health Commission. Other passengers are under a 14-day quarantine at a hotel in the city.

All the German passengers took a nucleic acid test before departure, and they will take dual tests for the virus' nucleic acid and antibodies during the quarantine period. Meanwhile, itt is not clear whether the infection of the engineer will lead to extra health checks for the others.

The confirmation has sparked concerns that such convenience for foreign employees working in China may pose a danger to the country's COVID-19 control situation.

Analysts noted that all inbound travelers will have at least two tests, one before departure and another on arrival. It should be rare for an infected person to escape detection in both cases. Even if a silent carrier did pass the tests without being detected, the quarantine period offers an extra guarantee to detect them, which could ease public concerns.

Experience also suggests that silent carriers are less likely to transmit the virus to others, possibly due to the lack of symptoms.

Yang Zhanqiu, a Wuhan-based virologist, told the Global Times that the different testing results are highly likely to result from the different primer designs of the test kits. Another possibility is that the virus in the infected passenger's body proliferated during the journey and was detected upon arrival.

The China-South Korea "fast track" mechanism, effective since May 1, stipulated that South Koreans take three coronavirus tests - one before departure, one at Chinese customs and the third one before resuming work. They must observe the epidemic prevention rules of local governments in the places where they work.

Some people suspected that exemptions from a quarantine period may allow silent carriers to pass the health monitoring procedures and bring about dangers to disease control, but analysts noted the possibility was very low.

A Beijing-based public health expert, who required anonymity, told the Global Times on Monday that even in some extreme cases where patients were not detected in a timely way, health monitoring will guarantee that the person's close contacts be put under medical observations to stop further contagion.

Sporadic cases will occur as the epidemic has not been brought under control worldwide and it is unrealistic to keep infections completely out of the country by continuing suspension of international ties, said the expert.

China could tailor its prevention measures to different countries based on the foreign countries' epidemic situations. Silent carriers appear in a higher percentage from countries that have more serious rates of contagion, and control measures should be accordingly stricter, such as more rounds of tests and longer quarantine requirements, he said.

China now has 62 active imported cases and three suspected cases. The rest of the 1,694 total imported infections have been discharged from hospital, Chinese National Health Commission reported on Monday.