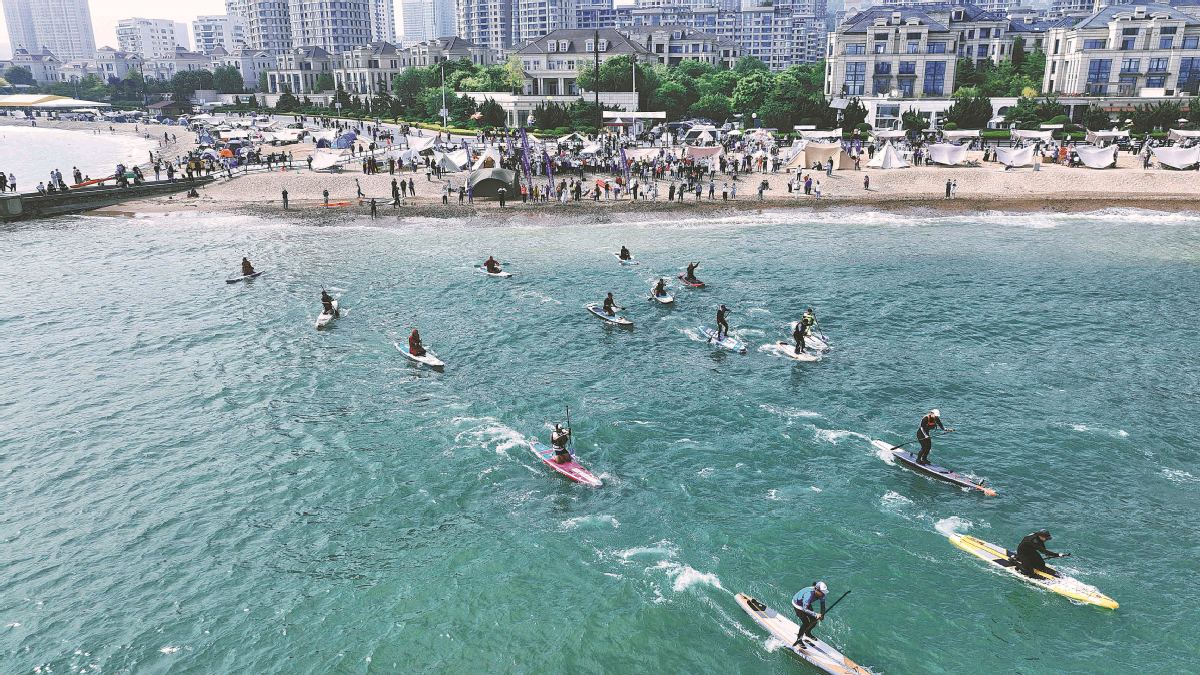 Paddleboarders take part in a contest sponsored by the Dalian Dragon Boat Sports Association in Dalian on June 4. The activity is attracting an increasing number of participants. (Photo: CHINA DAILY)

Paddleboarders, divers among those aware of need to safeguard nature

When 5-year-old Zhao Yunshu first saw footage on his mother's phone of people gathering marine creatures on a beach, he became totally absorbed in the scene.

The boy, who comes from the coastal city of Dalian, Liaoning province, was really curious. He said he often went to the beach to dig in the sand, but asked why he had never seen so many creatures like those in the video.

As Zhao was so interested, his mother, Jiang Xiaoye, 33, decided to take him back to a beach for him to learn more.

"Before we left, I searched online for tidal information, and I also bought some small tools such as rakes, scoops and buckets," she said.

One weekend in March, she drove Zhao 40 kilometers to a popular beach in a Dalian suburb, where more than 100 people were gathering clams, conches, crabs and other marine creatures as the tide ebbed.

Jiang said, "My mother, who came with us, initially complained that such efforts were a waste of time, but when she collected some clams, she started to enjoy the experience. Now, both my son and my mom are beach-combing fanatics.

"I guess they enjoy harvesting creatures with their own hands, along with the unpredictability of such exploration."

Located on the southernmost tip of the Liaodong Peninsula, Dalian faces the Bohai Sea and the Yellow Sea. Including islands, it boasts a coastline of 2,211 kilometers, the longest among Chinese cities.

Archaeological findings show that 6,000 to 7,000 years ago, settlements appeared on islands and in coastal areas of Dalian. In addition, bone fishhooks and stone weights for fishing nets were excavated from the ruins of two Neolithic sites in Dalian, showing that people in ancient times had mastered the art of fishing.

Now, for many local residents, the sea is no longer a way to make a living, but an opportunity to relax, have fun and get close to nature.

People enjoy the sea in a variety of ways－some like swimming, some prefer sailing or yachting, while others love diving.