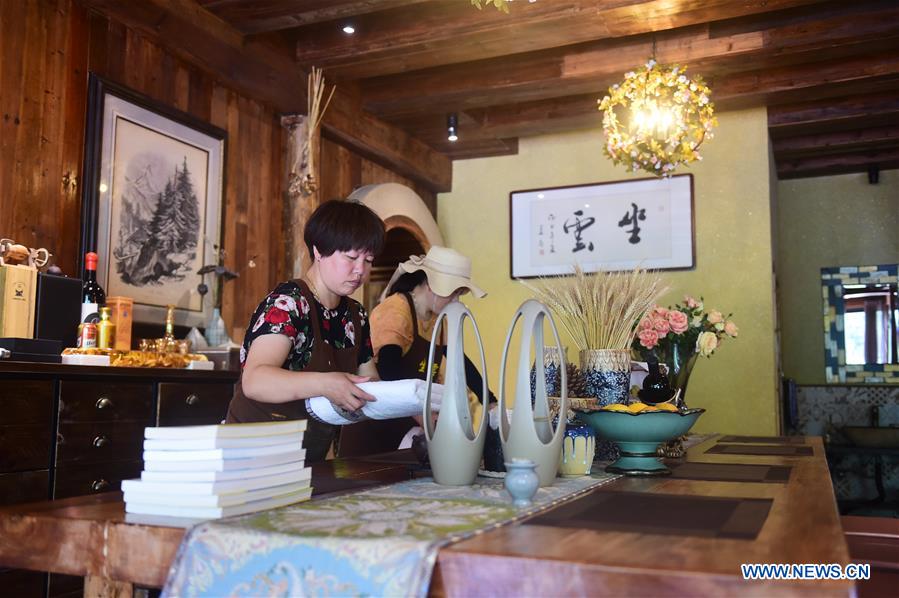 BEIJING, Sept. 3 (Xinhua) -- The China International Fair for Trade in Services (CIFTIS) scheduled to kick off Friday in Beijing is the first major international economic and trade event held offline in China since the outbreak of the COVID-19 pandemic.

China's accelerating development of services trade will provide huge market and rich opportunities for cooperation for countries worldwide, and boost global economic recovery as the pandemic has dealt a heavy blow to the world economy, analysts and scholars have said.

In the context of the complex international trade situation amid the pandemic, an international trade fair of such a scale in China is prominent and of great significance not only for China, a country that has managed to control the epidemic at an earlier date.

Peter Bakker, president and CEO of the World Business Council for Sustainable Development, said that the Chinese government responded appropriately when faced with the COVID-19 crisis.

Through this exhibition, people expect to see how China has responded to the crisis and made efforts for economic recovery, he said.

Gamal Bayoumi, head of the Cairo-based Arab Investors Union, told Xinhua that in recent years, despite the rise of global trade protectionism, China has been committed to promoting international trade.

With the epidemic hitting most economies in the world, China's holding of the CIFTIS will bolster confidence in global economic development, he said.

Calling the event an ambitious one, Jan Zahradil, chairman of the EU-China Friendship Group in the European Parliament, said that the CIFTIS will send a positive signal to the world that, despite some negative effects of the novel coronavirus pandemic, countries like China can still seek a path to recovery, expand international cooperation, and activate foreign trade.

It will also promote the resumption of work and production in various countries and alleviate global economic losses caused by the epidemic in a timely manner, he added.

Gustavo Girado, a professor at Argentina's National University of Lanus, said that the pandemic has brought huge challenges to global trade, and with global activities drastically reduced, trade in services concerning digitization and communications is crucially important.

Farid Murad, vice president of the Federation of Sao Paulo Trade Associations, said that a sucessful CIFTIS will reveal a new path for countries around the world to resume economic development in the post-pandemic era, and promote economic and trade cooperation among countries worldwide.

Since 2012, China's services trade has grown at an average annual rate of some 7.8 percent, higher than the global growth rate, according to China's Ministry of Commerce (MOC).

Services trade in China totaled over 5.4 trillion yuan (about 775.6 billion U.S. dollars) in 2019, ranking the second in the world for six consecutive years, the MOC said.

Trade in services has become a new supporting point for China's economic stability and a new engine for its development of foreign trade under the new circumstances, said An Yuhua, a professor of finance with South Korea's Sungkyunkwan University.

China has a huge market and abundant imported products, An said, adding that expanding trade in services can help achieve economic complementarity and mutual benefits between China and other parts of the world.

With a ravaging pandemic and a reeling world economy, international demand has been shrinking substantially, and global trade now faces a grim situation.

In April, the World Trade Organization warned that global trade is expected to fall by 13-32 percent in 2020 as the pandemic disrupts economic activity and life around the world.

Douglas McWilliams, deputy chairman of Centre for Economics and Business Research, said that before the pandemic hit the world, global trade in services grew faster than trade in goods.

However, in the post-pandemic era, with an increasing proportion of the service industry in the global economy and the vigorous development of digital trade in services driven by technological advancement, the share of services trade in global trade will continue to increase, McWilliams said.

An said that trade in goods has been greatly restricted as the pandemic has not been effectively controlled around the world, but services trade industries such as communications, finance, entertainment and culture may benefit from opportunities created by the pandemic, and grow rapidly with broad prospects.

Against the backdrop of the ongoing pandemic, the CIFTIS demonstrates the responsibilities China has undertaken, and the country's determination to unswervingly promote its opening-up policy, which will surely be furthered by the event.

"Affected by the pandemic, countries around the globe should cooperate and embrace opening-up," said An, who believes that the CIFTIS shows China's willingness and commitment to further opening up.

The event will help further ease market access in the service sector, promote the development of global trade in services and create a larger market for it, An said.

President of Hong Kong Singapore Business Association Philip Chan reckons that the CIFTIS reveals China's dedication to its responsibility for the world, contributing to market opening and free trade around the world.

The CIFTIS provides another platform for China to defend free trade, multilateralism and the interests of developing countries, Girad said, adding that the event embodies fair trade, mutual benefits and win-win cooperation, as well as the notion of a community with a shared future for mankind.

By building open platforms such as the CIFTIS, China is taking actions to show its commitment to build a community with a shared future for mankind, setting an example for the world, said Li Jun, a researcher at the Chinese Academy of International Trade and Economic Cooperation under the MOC. Enditem