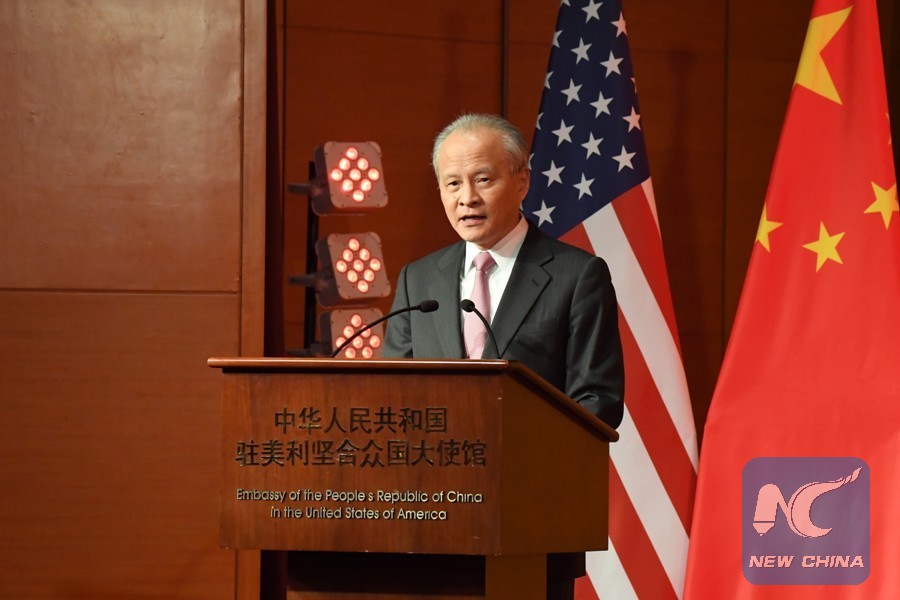 Chinese Ambassador to the United States Cui Tiankai has refuted accusations by the Trump administration against China on trade, noting that only consultations based on mutual respect and trust will lead to a proper settlement of their current dilemma.

Cui made the remarks in an article published Wednesday in the daily USA Today amid trade tensions between the US and China and other economies. The Trump administration has utilized tariff tools against Chinese goods worth tens of billions of US dollars.

Cui said the US' trade deficit with China does not mean it is "losing."

Rather, "thanks to the trade with China, American families have access to more, higher quality, lower cost products. In just 2015, trade with China lowered prices in the US by up to 1.5 percent, saving each family $850 on average," he said.

Noting that "deficits are not products of ill-intention, nor are they necessarily bad for an economy," he added that China has never deliberately sought a trade surplus with the United States.

The surplus, at the center of US arguments against China, was not produced intentionally, since "the flow of trade is determined by the market," Cui said.

"Generally, they result from how resources are allocated in a globalized economy and are natural reflections of the global value chain," he said.

"Besides some structural reasons, such as the low-savings and high-consumption rates America maintains, the role of the US dollar as the international reserve currency inevitably leads to trade deficits," he said.

Also, "the fact that the US government curbs high-tech exports to China makes the deficit even bigger," Cui said.

Another issue of concern of Washington regarding the US-China trade is about intellectual property rights (IPR).

Stressing that the US arguments against China's behavior are wrong, Cui said, "Chinese economic success has never been achieved by stealing from anyone, and never will be."

China is "strategically committed to and has recently made demonstrably significant strides" in IPR protection, Cui said.

"We have codified a robust IPR protection legal system, including setting up IPR courts and dedicated tribunals that enhance the dominant role of the judiciary in IPR protection," he said.

"Since entering the World Trade Organization in 2001, intellectual property royalties paid by China to foreign right holders has registered an annual growth of 17 percent, reaching $28.6 billion in 2017. More than $7 billion (25 percent) went to the US," he said.

"Let's be clear: the Chinese government has never made any such request to foreign companies," he said. "When it comes to technology or any other cooperation between Chinese and foreign companies, it is purely a matter of voluntary contracts."

"Indeed, many foreign companies have reaped huge benefits from setting up joint ventures in China over the years," Cui noted.

The structural problems of China's economy are also a source of American criticism. However, this is "neither fair nor objective," he added.

As for US accusations against the legal basis of China's countermeasures, Cui said such remarks are no more than "a thief crying 'stop, thief.'"

"Domestically, the 301 investigation runs counter to the US President's Statement of Administrative Action approved by Congress; internationally, it has violated its commitment made in the resolution of the General Agreement on Tariffs and Trade dispute with the European Community in 1998," he said.

Despite China's "maximum sincerity and patience" in trade talks, "unfortunately, the US has betrayed its own words," Cui said.

"From February to June of this year, China ... engaged in four rounds of high-level economic talks with the US As a result, the China-US joint statement has been announced with consensus reached on strengthening trade and economic cooperation, and avoiding a trade war," he said.

However, Washington "brazenly abandoned bilateral consensus and insisted on fighting a trade war with China, forcing us to take countermeasures," said Cui.

He noted that China will not yield to the Trump administration's trade bullying.

Moreover, major steps have already been delivered in China to promote its reform and opening-up recently, he said.

"Tariffs on 1,500 types of consumer goods have been lowered considerably. The import tariff on automobiles has been cut from 25 percent to 15 percent. The revised negative list for foreign investment released late last month substantially eased market access restrictions for foreign investors. In November, China will host our first International Import Expo in Shanghai," he said.

"With all of this as a backdrop, it is absolutely beyond our understanding that the US government initiated the trade war with such determination," said the Chinese diplomat. "Does the US government genuinely believe China would possibly yield to such unreasonable policy?" he asked.

"Anyone familiar with Chinese history knows that 'maximum pressure' doesn't work for our nation," he said. "Trade bullying will only backfire. There is no winner in a trade war. The US will only end up hurting itself and the world."

China's policy has long been geared toward dialogue and consultation when trying to resolve trade disputes, the Chinese diplomat said.

"To be sure, there is room for China to improve its trade policy and address structural economic issues. We certainly are open to addressing reasonable American concerns," he said. "But the two sides should conduct dialogue and cooperation on the basis of mutual respect and trust."

"For great powers like China and the US, competition -- even conflict -- is natural. It is, however, vital for us to manage such competition in an effective and constructive way," Cui said.