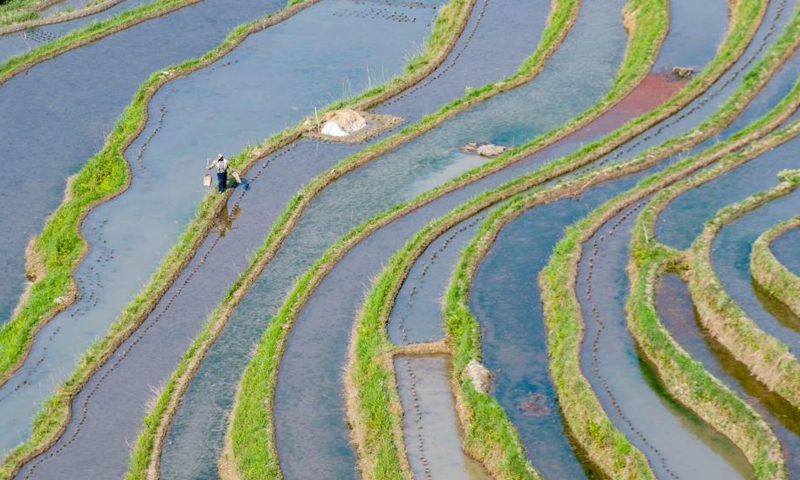 As China enters the crucial period of spring farming, agricultural authorities are vowing all-out efforts to accelerate seasonal sowing by smoothing out the transport of farming supplies and personnel, while implementing COVID-19 control measures.

The country has the foundation to achieve a bumper harvest of summer grain despite challenges caused by flare-ups of COVID-19 in multiple places and delayed planting of winter wheat in a couple of localities. The full year's grain production target will be achieved thanks to effective policy support, experts said.

More than 20 percent of spring crops have been sown, including 70 percent of early rice, faster than last year, data from the Ministry of Agriculture and Rural Affairs showed on Wednesday.

The figures indicate the agriculture and rural economy has maintained a steady momentum of development so far this year. China aims at attaining total grain output at 650 billion kilograms for 2022.

Northeast China's Jilin Province, which was hit hard by a COVID-19 resurgence starting in March, has gradually restored the order of production and life, and the progress of spring plowing has recovered better than expected, as the province has largely achieved the goal of COVID-19 clearance in its communities, Pan Wenbo, an official with the ministry, told a press conference on Wednesday.

Previously, the farmers in Jilin were worried about the impact of the epidemic on spring planting. But now with seeds arriving at households, preparation work that was delayed by the virus has largely recovered, according to Pan.

As a major grain-producing province, Jilin has a grain output of about 40 billion kilograms, which is crucial to ensuring national food security.

In the suburbs of Shanghai which is battling an Omicron outbreak, spring farming and material supplies are basically in place, as everything is ready for spring planting peak that will come in May.

With work resumption is progressing, the city's businesses related to spring plowing have reached a production resumption rate of 56.7 percent, data from Shanghai's agricultural authority showed.

And, Northwest China's Xinjiang Uygur Autonomous Region, a main cotton-producing area in China, is entering the peak season of cotton sowing, which is expected to be completed by the end of April.

The Ministry of Agriculture and Rural Affairs has warned against the "one-size-fits-all" approach in implementing COVID-19 prevention measures in different rural regions. It also vowed coordinated cooperation with other departments in ensuring supplies for spring farming and agricultural production by smoothing out transportation and distribution channels of chemical fertilizers and other farming materials

"Judging from the agricultural conditions in China, the transformation of the seedling situation of summer wheat is better than expected, and there is still a foundation for winning a bumper harvest," Pan noted.

Due to the Ukraine crisis, global food prices are growing, which will stay elevated for some time, Jiao Shanwei, editor-in-chief of cngrain.com, told the Global Times on Wednesday. But China is making all-out efforts to expand the production of staple grain products to enhance food self-sufficiency, Jiao said.

China imported 164.54 million tons of grain in 2021, equivalent to 24 percent of its grain output, data from the General Administration of Customs revealed.