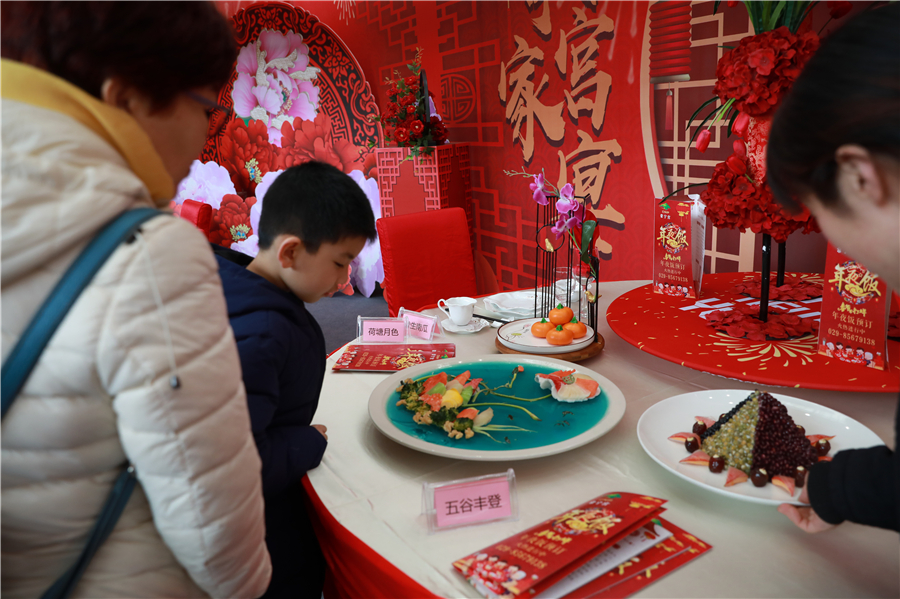 It took Shanghai resident Su Zhihao several rounds of phone calls and personal visits to three restaurants to secure a reservation for a family reunion dinner on the eve of Chinese New Year.

A family feast on the occasion has long been an essential part of celebrating the most important festival in China, also known as Spring Festival, which falls on Jan 25 this year.

While Su is looking forward to the big reunion, a family feast at home is a challenge.

"So we decided to go to a restaurant, but it's really difficult to find a suitable one less than a month ahead of the holiday," Su said.

By suitable, Su said, he meant he had to consider the price, cuisine, location and, last but not least, availability. Reservations at major restaurants have run short in major cities despite higher prices due to the rising cost of labor and food, especially pork.

"All of our tables and rooms for Spring Festival Eve have already been booked," said Wang Shijia, deputy manager of Lubolang, one of the most famous traditional restaurants in Shanghai. It has received many foreign dignitaries, including former United States president Bill Clinton and Queen Elizabeth II.

"Even before our reopening, our patrons were calling in, making reservations for our festival meals," Wang said.

Similar demand is being observed in other cities such as Beijing and Xi'an, the capital of Shaanxi province.

Guan Na, meeting events director for Crowne Plaza Beijing Lido, said the hotel has launched set meals for the festival, catering to families of various sizes, which have proved popular.

Dong Hui, manager of the newly opened Hualuxe hotel in Xi'an, said the hotel offered 15 tables for Spring Festival Eve meals and most had already been booked.

"Traditionally, Chinese parents make the family reunion meals at home, but as more children want their parents to save the sweat and have a good rest during the last day of the lunar year, people come to us," Dong said.

Su, who eventually booked a 4,000 yuan meal set for 15 people in a private dining room at a restaurant, agreed that convenience is the top reason behind the demand.

"The more people we gather, the merrier the festival atmosphere," Su said, "but only when you don't have to fuss over the cooking."