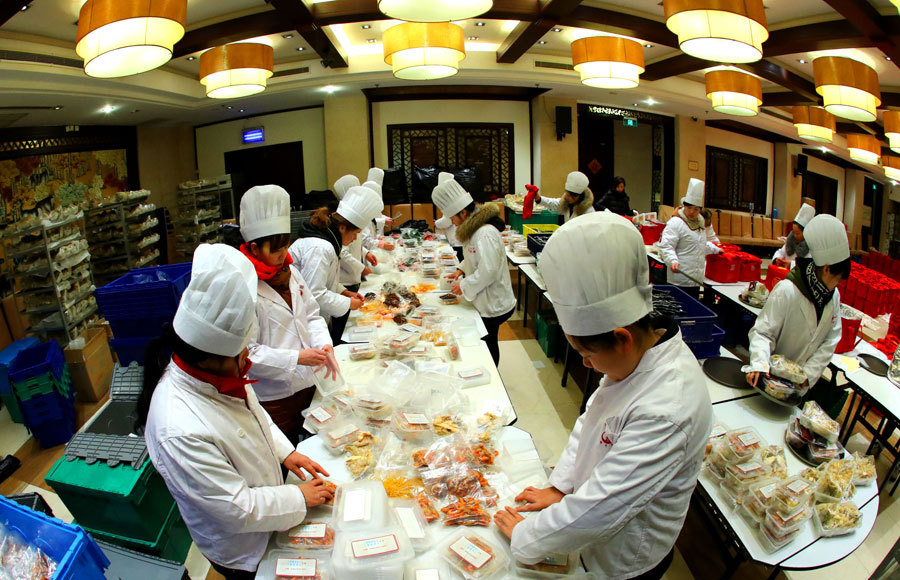 On Jan 13, the first day of the 12th lunar month, the number of searches for "Lunar New Year's Eve dinner" on the online food ordering platform Eleme quadrupled compared with the same day last year.

Fang Jie, who is responsible for the platform's Lunar New Year's Eve dinner project, said the number of searches usually rises only after the Laba Festival, also known as the Rice Porridge Festival, which falls on the eighth day of the 12th lunar month.

However, with new cases of COVID-19 reported in several places in China, people are being encouraged to remain in cities where they work to celebrate the Spring Festival holiday, which this year runs from Feb 11 to Feb 17.

"Last year, due to the pandemic, online business in the catering industry grew significantly. We expect that for Lunar New Year's Eve dinner this year, takeout choices will rise further ... from the number of restaurants to the variety of dishes offered," she said.

Countless people working away from their hometowns will miss their parents' signature dishes at family reunion dinners on the eve of Spring Festival this year.

These meals are traditionally home-cooked, but takeout dinners are set to become a popular choice for Lunar New Year's Eve next month. Restaurants and online food ordering platforms are ready for their busiest night of the year.

Some restaurants are offering set takeout meals for two to four people, but are also catering to single diners.

Fang said Eleme is collaborating with restaurants to launch set meals for one to four diners, especially in first-tier cities such as Beijing, Shanghai and Guangzhou and Shenzhen, Guangdong province.

"It's going to be different this year, with many couples and single people having to celebrate Spring Festival on their own," she said. "Many of them do not know how to cook the main course for a Spring Festival dinner, so we hope the restaurants can help them with this.

"It takes some time for people to learn how to cook these complicated dishes, so it's better that they order takeout or semi-finished meat dishes and cook the vegetables themselves."

Fang said strong demand is expected during the holiday for milk tea and desserts, and Eleme has contacted merchants to prepare for a rising number of orders.

She said the platform has distributed many thousand pairs of gloves and kneecaps to its delivery riders, who are being given a special payment to work during the holiday. It is also preparing an online gala and special dinner on Lunar New Year's Eve for deliverymen not returning to their hometowns.

In 200 cities nationwide, Eleme has collaborated with more than 30,000 restaurants and stores to set up courier stations for deliverymen to take a break. The stations also offer a free charging service for the riders' scooters and motorcycles, along with hot drinks and food.

Fang said set meals offered by the platform in collaboration with restaurants will be launched online from Monday.

Customers can also collect meals themselves."They don't have to wait for a deliveryman if the restaurant is close to their homes," she said. 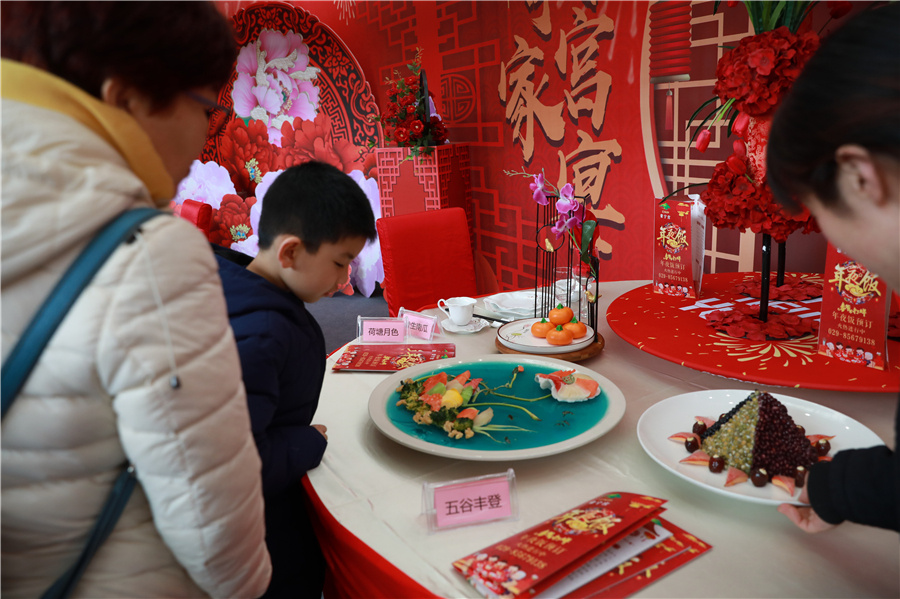 The Nanjing Dapaidang restaurant chain usually offers a set Lunar New Year's Eve dinner for eight to 12 people, but marketing director Han Yan said that this year, set meals for two to four diners are being provided at a cost of 398 yuan ($61).

"The dishes in our restaurants are mostly served in small portions, so for our 398-yuan set we have included nine dishes with a variety of our signature menu offerings. This way, customers can sample more food for this special dinner," Han said.

"We are preparing Lunar New Year's Eve dinners in our 80 restaurants across China. Take Nanjing (capital of Jiangsu province) for example, where we have prepared 1,200 set dinners to ensure each of our dozen restaurants in the city can offer some 100 such meals," she said.

Han said the 398-yuan sets make up about one-third of the dinners the business has prepared for the eve of Spring Festival. The meals must be ordered two days in advance.

"As some people are still choosing where to spend Spring Festival, we are giving our customers more time to decide. They can opt to dine at our restaurants, collect meals themselves or have them delivered," she said.

Han feels that due to the pandemic, the chain's eateries have put more effort into online services. They have also changed their menus more often to meet customer demand, and upgraded takeout meals.

Nanjing Dapaidang has prepared special packaging for Spring Festival. "We have tested it to ensure it keeps food hot for at least an hour and a half," Han said.

She estimates that 80 percent of the company's 6,000 employees will work during the holiday.

"Our purchasing and kitchen staff members are ready for the busiest season of the year, and if delivery platforms are short of manpower, our employees are ready to join these teams," she said.

Han said a crisis plan has been drawn up in the event of a COVID-19 outbreak emerging in a particular area. If a community needs to be quarantined, Nanjing Dapaidang will collaborate with residents to ensure food is delivered.

The chain has also launched several gift boxes featuring semi-cooked dishes that only need to be reheated. These dishes include traditional Nanjing food such as boiled salted duck and preserved meat. Han said tens of thousands of the gift boxes have been sold.

"It's a special year for the catering industry, with most restaurants preparing to deliver food for Lunar New Year's Eve dinner. All we can do is prepare well and meet customers' needs," she said.

During the pandemic, the Meizhou Dongpo restaurant chain has launched semi-cooked takeout dishes and online vegetable stores. Both services have proved popular and have been upgraded for Spring Festival.

"For these meals, we use a seal to avoid the soup spilling. The meals can also be heated directly on a stove in the bowl provided, so customers don't have to wash their own pots," Zhou said.

Vegetables can be ordered online from Meizhou Dongpo for delivery the next day. "For Beijing diners, we provide fresh local vegetables shipped from Sichuan province each day," Zhou said.

The chain is offering Lunar New Year's Eve takeout dinner sets ranging in price from 399 yuan to 1,899 yuan, together with an onsite chef.

Zhou said its restaurants nationwide would remain open during the holiday, providing breakfast, lunch and dinner.

For those eating alone on Lunar New Year's Eve, Japanese restaurant Nadaman in Beijing has launched a special Spring Festival hotpot set, which will be available throughout the holiday.

These sets, which cost 688 yuan, feature a bottle of sake, two types of sashimi and other hotpot ingredients such as prawns, salmon, beef, pork, chicken and a variety of vegetables.