Squad fights terrorists who transit from Xinjiang to Southeast Asia 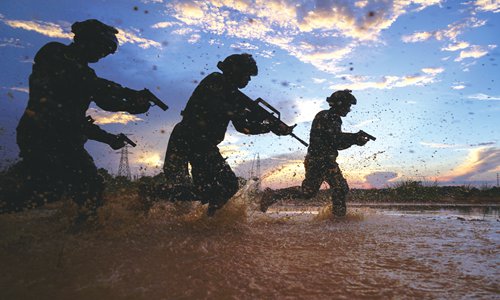 Soldiers from a special operations team in Guangxi Zhuang Autonomous Region respond to a simulated attack in the countryside. Photo: VCG

Along the Sino-Vietnamese border, a special operations team is involved in the counter-terrorism fight to protect the people living in Chongzuo, in the Guangxi Zhuang Autonomous Region. The team, which was set up in February, is the first of its kind in the region, with 11 soldiers and one officer who were selected from more than 1,300 soldiers in their regiment.Chongzuo shares a 533-kilometer border with Vietnam and it faces the risk of terrorists, according to an article on the Chongzuo government website. Many extremists from the Xinjiang Uyghur Autonomous Region want to get to countries such as Afghanistan and Turkey and try to use Chongzuo as a transit point because of the convenient transportation to Vietnam. The article said that extremists who fail to flee have the possibility of carrying out terrorist activities in Chongzuo. So, to fight against this, the team members have been equipped with new, advanced equipment including laser guns and infrared night-vision devices.  The military has also cooperated with foreign personnel in training. Liu Qiangqiang, the head of the special operations team, said that soldiers have to undergo a 5-kilometer cross-country run, fully armed, within 20 minutes, twice a day; do 50 bench presses in a minute; and shoot 5 eggs from a range of 25 meters within 10 seconds. No one has missed the training once. Because of this, they can deal a hard blow to any terrorists along the border and, in the words of one solider, special operations means you need to be very good at combat. In an eight-month period, the team have arrested 970 foreigners for trespassing in the border area and confiscated 4 guns and 30 bullets. They have also arrested 5 terrorists and confiscated 20-kilograms of heroin and 5-kilograms of crystal meth.