China has achieved an economic miracle any other country would envy during 40 years of reform and opening-up - from stunning growth rates to a global economic powerhouse that ranks second in GDP and first in trade. 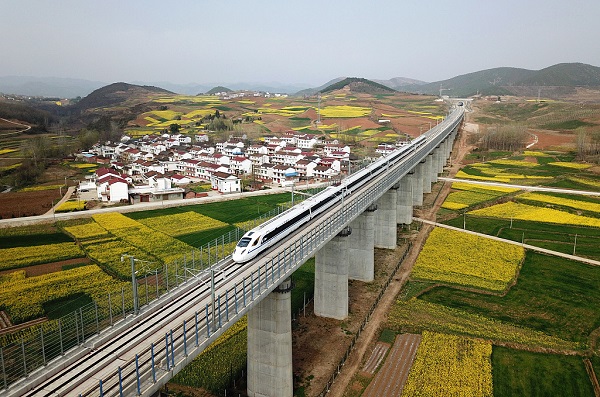 A bullet train runs on the Yangxian section of Xi'an-Chengdu high-speed railway line in Northwest China's Shaanxi Province on March 21, 2018. China has pledged to coordinate its efforts of environmental protection and economic development in 2019, an important year for winning the tough battle against pollution. (Photo: VCG)

But beyond the glamorous headlines lies another impressive achievement that few countries in the world could replicate: No economic crisis has hit China in the past 40 years.

It shielded itself from the economic catastrophe even when the 1997 Asian financial crisis crippled most Asian economies and the US subprime crisis snowballed into a global financial tsunami in the late 2000s.

A stable political system enabled Beijing to build an economic "Great Wall" that effectively defends against external shock, Chinese observers and officials said. The nation's firm commitment to reform and opening-up has also accelerated internal reforms that gave birth to a stable, sound and resilient economy, they noted.

China is the only emerging economy that did not experience a systematic financial and economic crisis in the past four decades of reform and opening-up, statistics show.

This is against the backdrop of the global economy sliding into a number of downturns in past decades, starting with the oil crisis of 1973 that led the world economy into a prolonged period of stagnation, the Black Monday stock market crash in 1987, the Latin American debt crisis in the 1980s, the 1997 Asian financial crisis and the US subprime crisis of the late 2000s.

With the escalating China-US trade war, some have expressed worries that a new round of crisis may drag the world into a global recession.

In contrast to China, almost all major global economies have taken a dive with hardships.

Take Russia as an example. The country grappled with financial crisis in the late 2000s. In 2014, Russia's economy was hit by price slumps in crude oil, a major export.

The Asian financial crisis in 1997 sank the economies of Japan and South Korea, which used to be dominant economic powers in Asia.

In the latest decade, European countries have been struggling under the impact of a financial crisis and European sovereign debt crisis, Florian Lupe, a Germany-based scholar specializing in China-related issues, told the Global Times.

"China's economy grew at a high speed during the past 40 years without a crisis," Lupe said. "This is truly a miracle. No other great power could achieve that."

Chinese analysts said the fact that China is an exception to all external fluctuations during the last 40 years defies the predictions of some Western media and scholars, who periodically suggest China is nearing an economic crisis, citing the country's debt and real estate bubble.

And China's economy remained stable and robust even in 2008 when Western economies were hit hard by the US subprime crisis.

In 2010, China overtook Japan to become the world's second-largest economy after the US. 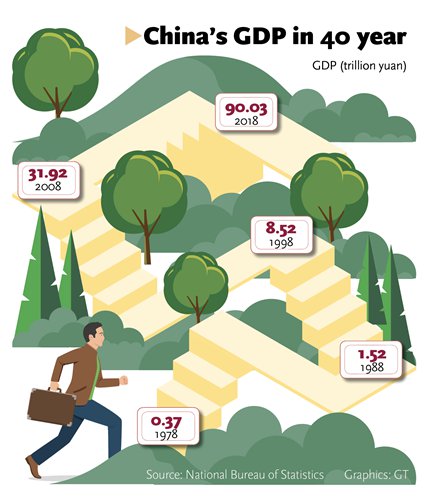 China has also built an industrial system that is the most complete in the world, Yao Jingyuan, former chief economist of China's National Bureau of Statistics (NBS), told the Global Times in an exclusive interview. Based on United Nations standards, the country is home to 41 main categories, 191 categories and 525 sub-classes of industries.

It was not sheer luck that China evaded the financial crises that swept the world, Chinese analysts said.

They cited a stable political system, with strong internal cohesion to drive effective government measures and swift control of the situation under external conditions.

"China's economic system has a unique edge compared with other economies: It can pool resources and unite strength to deal with important matters," Zhao Chao, a professor at Renmin University of China in Beijing, told the Global Times.

The country's officials did not blindly buy into the "shock therapy" most economies adopted in the 1980s and 1990s to deal with economic downturns.

Rather Beijing rationally pursued a market-oriented economy and intervened in the "invisible hand" of the market when necessary, the experts noted.

Another reason for China's immunity to external crisis was the country's resolve to stick with reform and opening-up, which in turn prompted the government to push forward and deepen a series of internal reforms, such as financial reforms and the reform of the State-owned enterprises to enhance the ability to resist risks, Yao said.

"China does not copy the paths that some Western countries have embarked," Yao said. "We're constructing socialism with Chinese characteristics under the leadership of the Communist Party of China."

When economic crisis gripped the world, China, as a responsible major power, did not walk away but played an important role in restoring global financial order, experts stressed.

In the 1997 Asian financial crisis, some Asian economies such as Japan devalued their currencies, which exacerbated financial woes in Asia. China pledged not to depreciate the renminbi, placating woes that swept Southeast Asian countries.

Then during the 2008 global financial crisis, China unveiled a massive stimulus package to shore up its economy, making the country a major driver of world economic recovery.

China has ranked first in its contribution to global economic growth since 2006, becoming the leading engine of world economic growth, according to an official NBS report on Thursday.