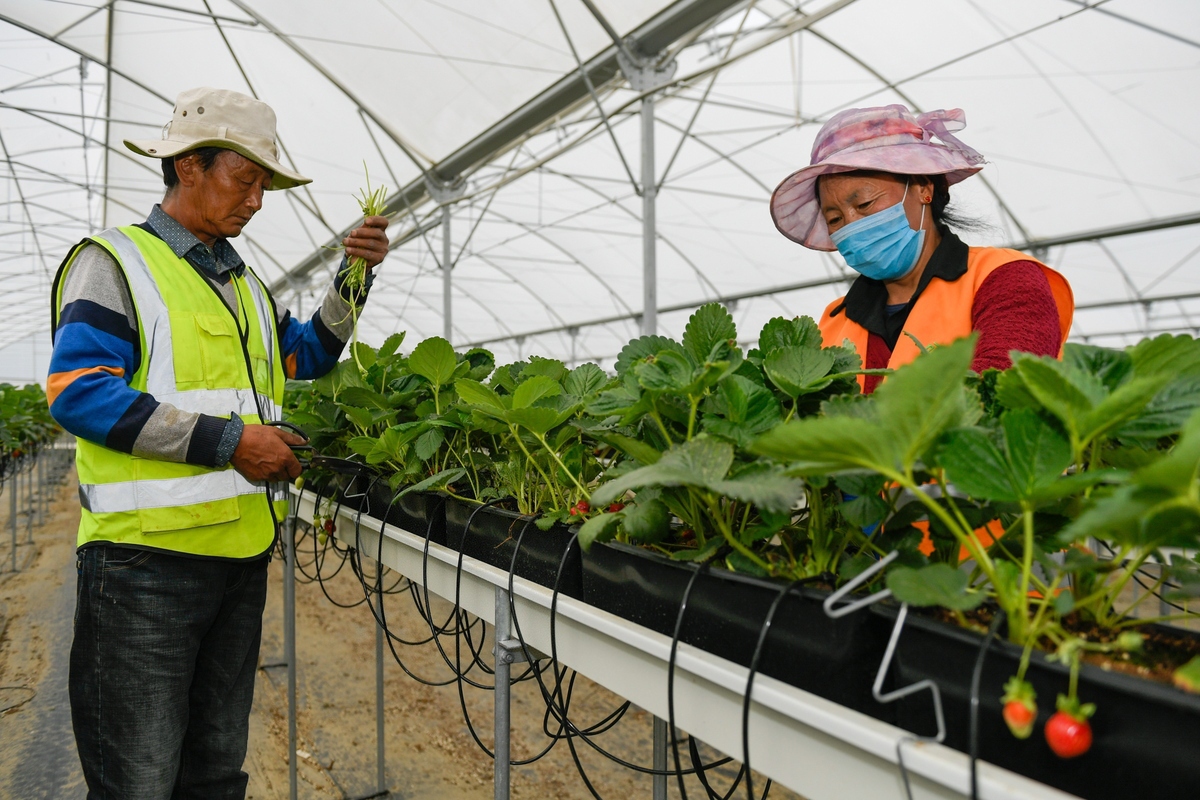 Farmers tend strawberries in a greenhouse in Dranang county, Tibet autonomous region, in July. Berry growing and other green industries are part of the county's poverty alleviation efforts. (Photo: Xinhua)

Victory against poverty by 2020 within reach, leading group official says

China aims to lift more than 10 million people above the poverty line this year, and 300 counties will be removed from the poverty list, a high-ranking official said on Wednesday.

The two goals, if accomplished, will lay a foundation for victory in the country's poverty alleviation campaign by 2020, Ou Qingping, deputy head of the State Council Leading Group Office of Poverty Alleviation and Development, said at a policy briefing hosted by the State Council Information Office.

Ou said the campaign will continue to focus on heavily impoverished regions to ensure that poor people have food, clothing, medical care, basic education and housing. The quality of poverty alleviation will be improved to prevent those people from dropping into poverty again, he added.

The briefing was given after a State Council executive meeting, presided over by Premier Li Keqiang, on Feb 11 in which it was decided to promote poverty alleviation in key regions.

Poverty alleviation is high on the list of priorities in the 13th Five-Year Plan (2016-20). The government has vowed to lift all poor people out of poverty by 2020.

Last year, 13.9 million people were lifted above the poverty line - ahead of the target pace of 10 million people per year lifted out poverty for six consecutive years. China's poor population had fallen to 16.6 million by the end of 2018 from about 99 million in 2012, Ou said.

Nationwide, 153 impoverished counties had been removed from the national poverty list, he said.

Last year, the Communist Party of China Central Committee and the State Council released a guideline for targeted poverty alleviation that aimed to lift 30 million people out of poverty over three years. It focused on poverty alleviation in three regions and three prefectures - including the Tibet autonomous region and the Nujiang Lisu autonomous prefecture in Yunnan province.

At a meeting last week, Vice-Premier Hu Chunhua called for concerted efforts to ensure that the poor have access to compulsory education, healthcare, housing and safe drinking water. Infrastructure and other public services should be improved and sustainable development should be established in impoverished regions, Hu said.

According to the Ministry of Water Resources, more than 1 million poor people in rural areas don't have safe drinking water.

"Some villages still don't have a healthcare station and a doctor, and residents cannot afford to go to the hospital," Ou said. "In poverty-stricken areas, around 500,000 to 600,000 children drop out of school each year."

More money will be channeled into poverty-alleviation efforts, and supervision will be strengthened to support the campaign nationwide, he added.