Stories of President Xi and Africa

"China and African countries are friends in need, and friends in need cannot be forgotten." President Xi Jinping has deep feelings for the African people. After assuming the presidency, Xi met with African leaders on many occasions, and set foot on the African continent four times, leaving behind many touching stories.

In March 2013, Xi came to Africa on his first visit after taking office as Chinese president, and Tanzania was his first stop. On March 25, Xi arrived at the Julius Nyerere International Convention Center, built with aid from China, where he was received by then-president of Tanzania Jakaya Mrisho Kikwete. 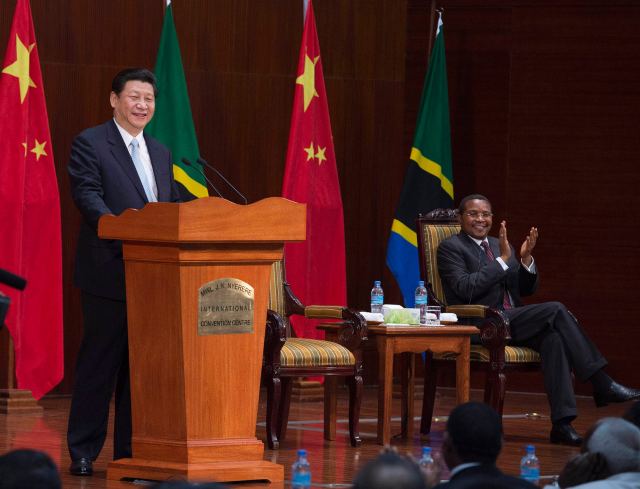 As Xi walked to the center of the podium, the hall resounded with stormy applause. Xi delivered a speech. He first greeted the audience by saying "habari," meaning "hello everyone" in Swahili, a widely spoken language in Africa, which immediately brought him closer to the audience.

In his speech, Xi recalled, "In the wake of the devastating earthquake in China's Wenchuan, African countries rushed to our assistance. One African country, with a population of less than two million and not well-off itself, made a generous donation of two million euros to the quake area - about one euro per person! This outpouring of compassion has warmed the hearts of the Chinese people."

At the end of his speech, he said "asantenisana" in Swahili, expressing "thanks" to the audience.

Visiting a cemetery for Chinese experts in Tanzania

On March 25, 2013, during his state visit to Tanzania, President Xi Jinping made a special trip in drizzling rain to the Cemetery for Memorable Deceased Chinese Experts Assisting Tanzania.

The gravestones were neatly lined up, commemorating more than 60 Chinese experts, technicians and workers who laid down their lives to build the Tanzania-Zambia Railway (TAZARA). Xi carefully tidied up the ribbons on the wreaths, presented white bouquets to the tombs of the martyrs, and wrote an inscription on the commemorative book, which reads: "The spirit of the martyrs will encourage future generations, and China-Tanzania friendship will be handed down from generation to generation."

He said with deep emotion that their names, just like TAZARA, would always be remembered in the hearts of the Chinese, Tanzanians and Zambians.

Talking to a Confucius Institute teacher

On March 30, 2013, during a trip to the Republic of Congo, President Xi Jinping attended the opening ceremonies of the Marien Ngouabi University Library and its Chinese section, which was constructed with Chinese aid. There he met with Edwige Kamitewoko, a Congolese teacher at the Confucius Institute. "President Xi asked me when and where I learned Chinese. I said from 2001 to 2005 in Hangzhou," Edwige recalled. "He asked me if I like Hangzhou. I told him I liked it very much because Hangzhou is a good place. He said he was also working in Hangzhou at that time."

"Then President Xi asked me whether teachers at the Confucius Institute were from here or China," Edwige further recalled. "I said that there were two from China and one from here, who was me."

"His praise for our teaching team impressed me and made me feel so honored." Edwige treasures the videos and photos of her conversation with Xi that day.

Feeding an orphaned elephant in Zimbabwe

During his official visit to Zimbabwe in December 2015, President Xi Jinping inspected a local wildlife sanctuary in Harare. He visited the wild animals rescued by the sanctuary, and fed orphaned elephant Moyo and some giraffes with fruit and leaves.

"He had close interaction with the animals here," recalled Roxy Danckwerts, the founder of the sanctuary. "I felt that he was very delighted when feeding the elephants and giraffes. He asked a lot of animal-related questions and how he could help protect the wildlife in Zimbabwe." 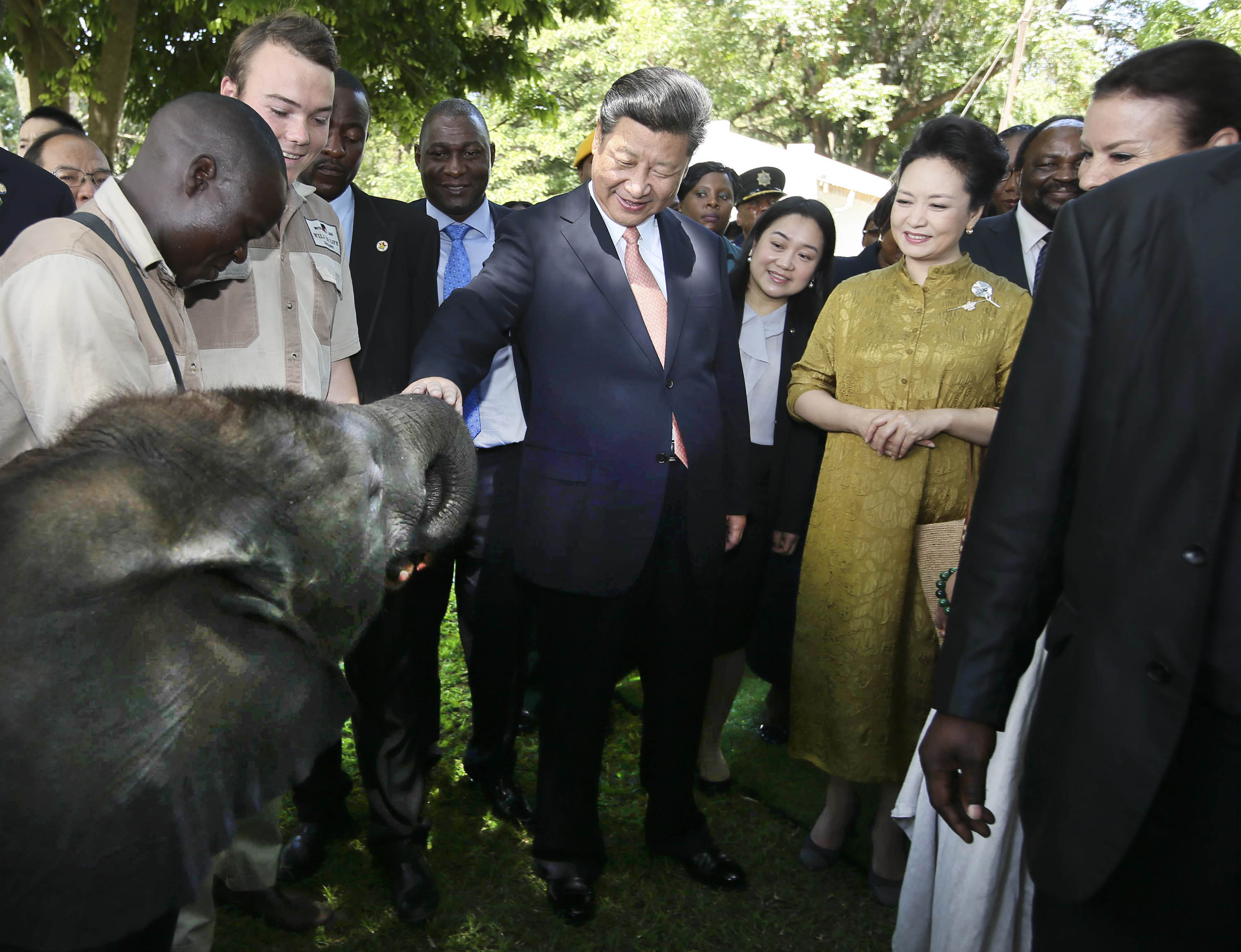 "The president just loved animals, and he just had this wonderful smile on his face. He was really excited to meet Moyo. He was really concerned about the ivory problem. Banning the domestic ivory trade in China was a huge step for the world showing that China is making this move," said Danckwerts.

Xi also explained China's initiatives to breed giant pandas and expand protected areas, Danckwerts said. "I thought that was very significant that he is making such big strides in his own country."

On January 21, 2016, President Xi came to the ancient Luxor Temple and attended the opening ceremony of the Sino-Egyptian Cultural Year with his Egyptian counterpart, Abdel-Fattah al-Sisi, commemorating the 60th anniversary of the establishment of diplomatic ties between the two nations. Xi was greeted by Sisi at the parking area when he arrived at the Luxor Temple. The two heads of state toured Luxor Temple along the main road, with Egyptian Minister of Antiquities Mamdouh Damati giving a lecture. Xi and Sisi listened as they walked and talked about the characteristics of the ancient civilizations of the two countries.

Xi praised the city of Luxor as the great embodiment of the ancient Egyptian civilization, saying the architecture displays the marvelous wisdom as well as high scientific and technological standards of the Egyptian people.

After watching a performance jointly presented by Chinese and Egyptian cast members, Xi left the Luxor Temple together with President Sisi. On a whim, the two heads of state stopped six times to take pictures in the magnificent historical buildings of ancient Egypt. 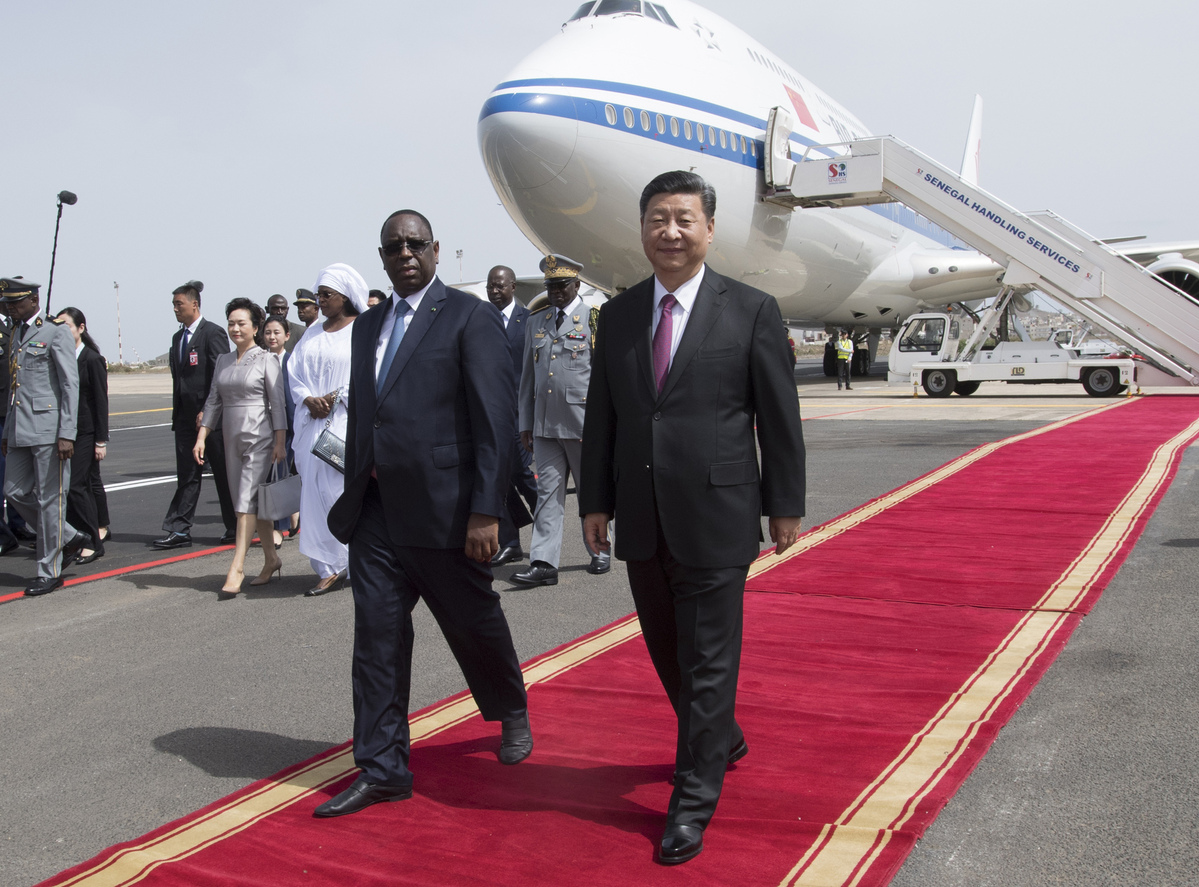 In July 2018 Chinese President Xi Jinping started his first overseas trip of his second term as Chinese president and Africa was one of his destinations.

After wrapping up his state visit to the United Arab Emirates on July 21, Xi arrived at the airport in Dakar, Senegal, after a 9.5-hour flight. Two hours later, he showed up at the Senegalese presidential palace. There he held talks, witnessed signings, received medals, met journalists and attended a banquet.

After these activities, it was nearly midnight when he returned to the hotel.

From Senegal, horn of West Africa, to Rwanda, a landlocked country, from South Africa, the southernmost tip of the continent, to Mauritius, an island country in East Africa, the busy schedule was repeated.

Exchanges and cooperation between China and Africa were promoted via the intensive trips.

(Translated by Qichu; edited by Huang Jingjing and Sun Tianren)