Ten foreigners have received the China Reform Friendship Medal at a conference celebrating the 40th anniversary of China's reform and opening-up at an event in Beijing on Tuesday.

Here's a brief synopsis of each of the recipients. 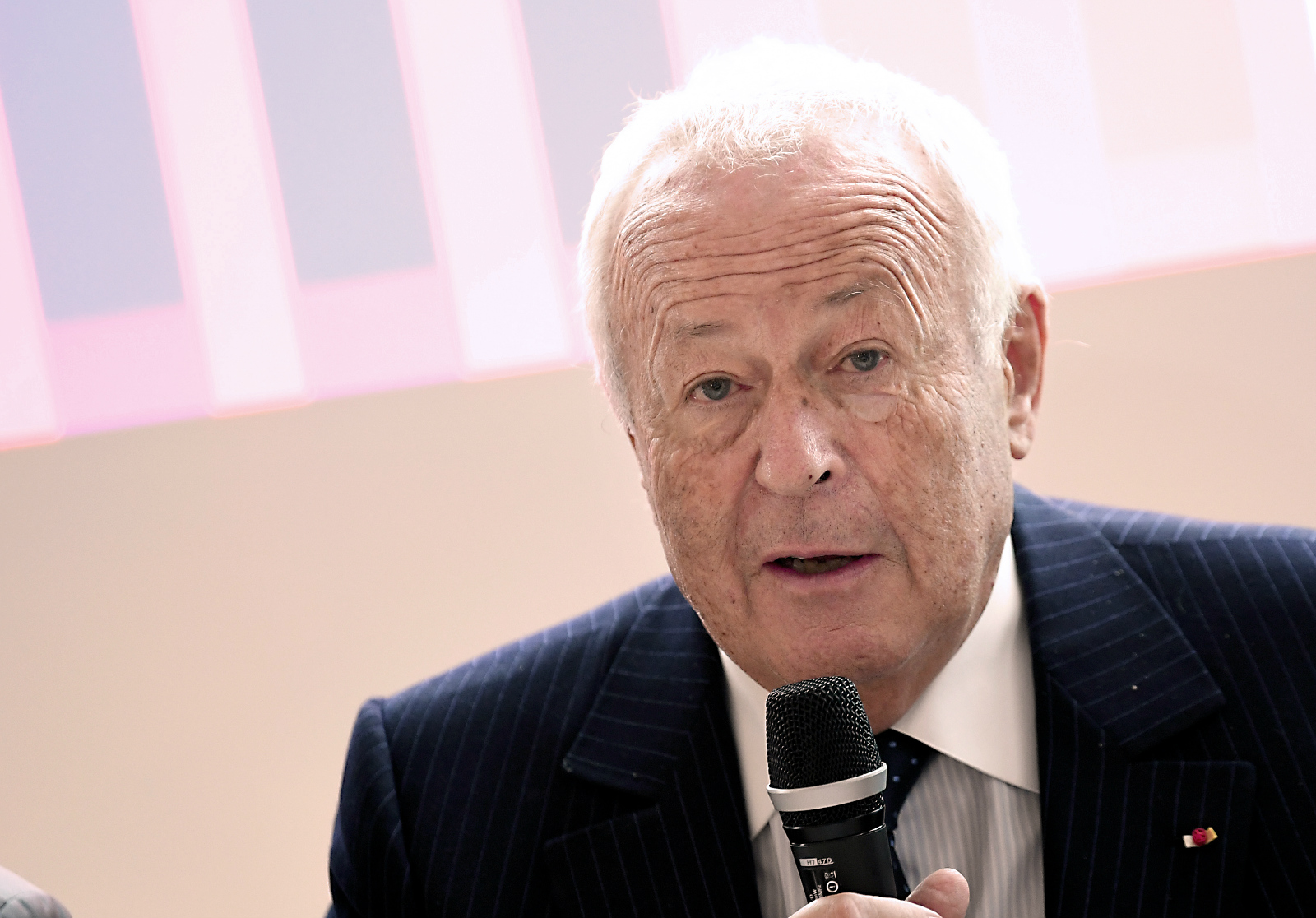 BioMerieux VITEK was set up in Hong Kong in 1991. In 1997, they opened a mainland office in Beijing. The firm's headquarters are located in Shanghai.

For decades, Institut Mérieux has cooperated with Chinese health officials in tuberculosis control and new infectious disease prevention. Their collaboration has included the establishment of production and R&D bases in Shanghai, as well as high-level biosafety laboratory in Wuhan.

Wiener Grisch is best known as the first "foreign factory director" hired in China after reform and opening up.

From 1984 to 1986, Grisch was appointed director of the Wuhan Diesel Engine Plant. Despite being over 60 years old at the time, he worked around the clock to rectify the fundamental problems at the Plant. Gerich worked almost daily from 4:00 a.m. to 6:00 p.m, believing that efficiency could be improved only by downsizing the number of staff. He implemented a structural wage system, paying workers according to their performance.

In his two years as director, the run-down factory regained vitality and vigor, with its diesel motors eventually being sold in seven different countries in Southeast Asia, earning millions of U.S. dollars.

In May 1986, Grish was granted permanent residence in China, becoming the first foreigner to gain the honor in Wuhan. There's a majestic bronze bust inscribed with the name of Werner Gerich in Wuhan. He is the third German, following Karl Marx and Friedrich Engels, to be so honored in China. 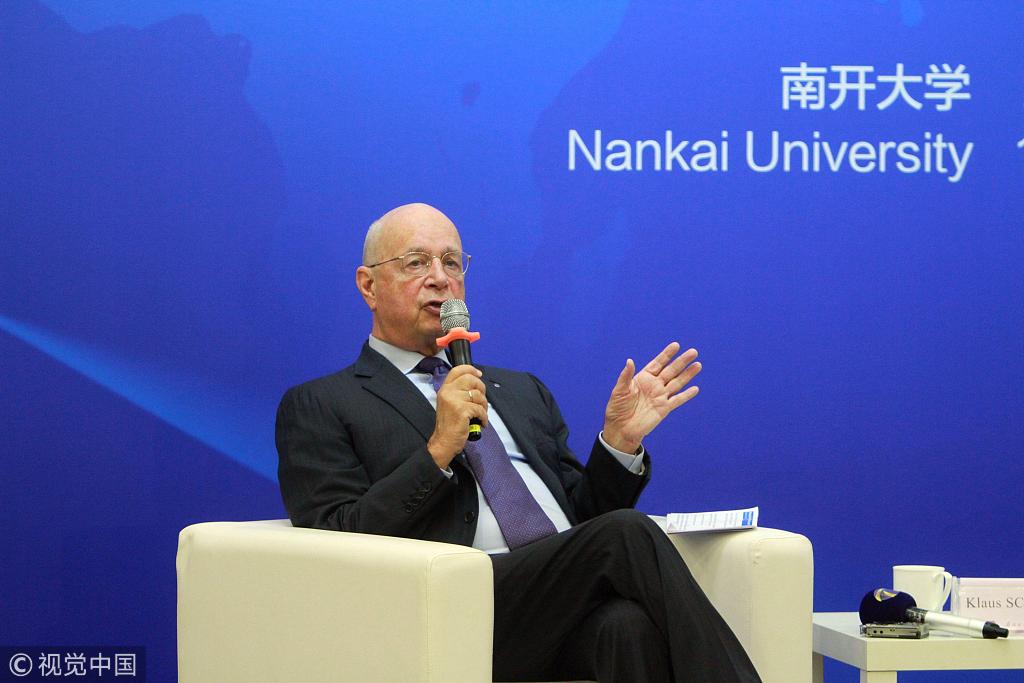 Professor Klaus Schwab is an engineer and economist. But he is best known as the Founder and Executive Chair of the World Economic Forum and the International Organization for Public-Private Cooperation.

He founded the Forum in 1971. Schwab paid his first visit to China in 1979 and later invited a Chinese delegation to Davos. China had just launched its reform and opening-up policy in 1978. Over the next 30 years, Schwab visited China at least once a year. China began establishing closer and closer cooperation with the World Economic Forum, eventually leading to the establishment of the so-called "summer Davos" in China on an annual basis in 2007.

The Forum employs over 700 people, with its headquarters in Geneva, Switzerland. The WEF also maintains additional offices in New York, San Francisco, Beijing and Tokyo. In 2007, the foundation established the Annual Meeting of the New Champions - Summer Davos - which is held annually between the cities of Dalian and Tianjin on a rotating basis. 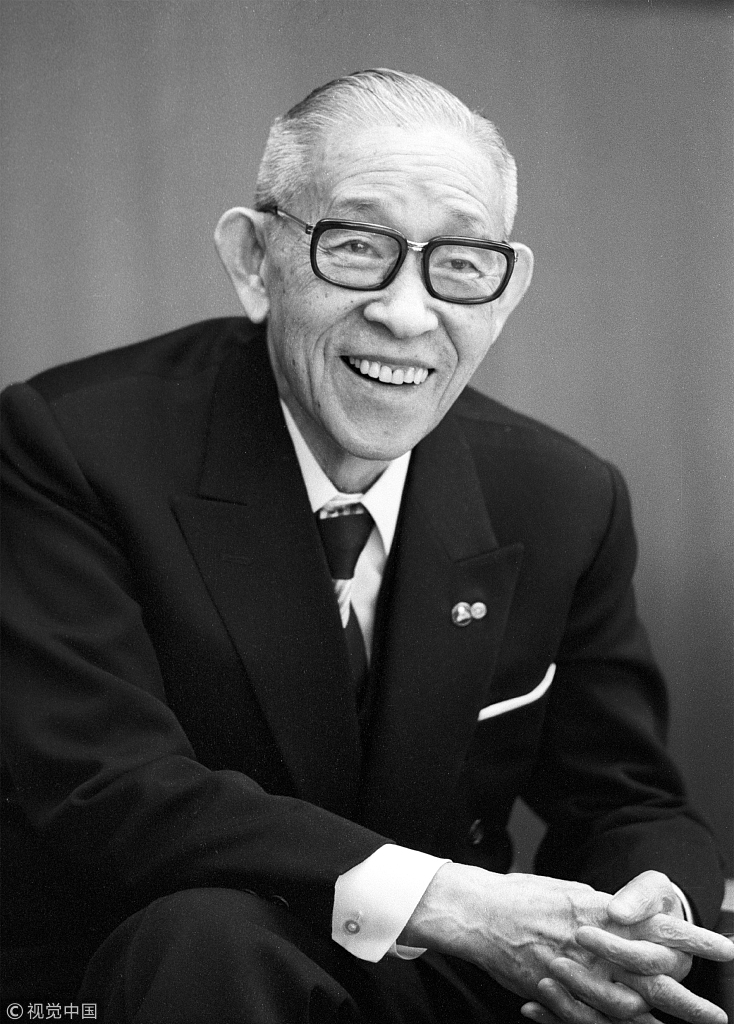 Kōnosuke Matsushita founded Panasonic, the largest Japanese consumer electronics company. He passed away at the age of 94 in 1989.

In October 1978, then-Vice Premier Deng Xiaoping travelled to Japan to sign the Japan-China Peace and Friendship Treaty, where he met with Kōnosuke Matsushita and asked him if he was willing to help China advance the modernization.

Kōnosuke Matsushita accepted an invitation from Deng and visited China in 1979. Later he came up with a plan to establish a joint venture. Beijing Matsushita Color CRT Co., Ltd. (BMCC) was established as the first joint venture in China in 1987. There were 250 Chinese employees selected to be on the first production line. They received practical training in Japan for six months prior to the start of production.

In June 1989, the first locally-produced CRT units were completed in Beijing.

The joint venture was albe to turn a profit in its first year. Other Japanese companies began to follow Panasonic's lead. Matsushita's initial vision in Beijing eventually led to the establishment of 79 factories across China employing nearly 60,000 people. 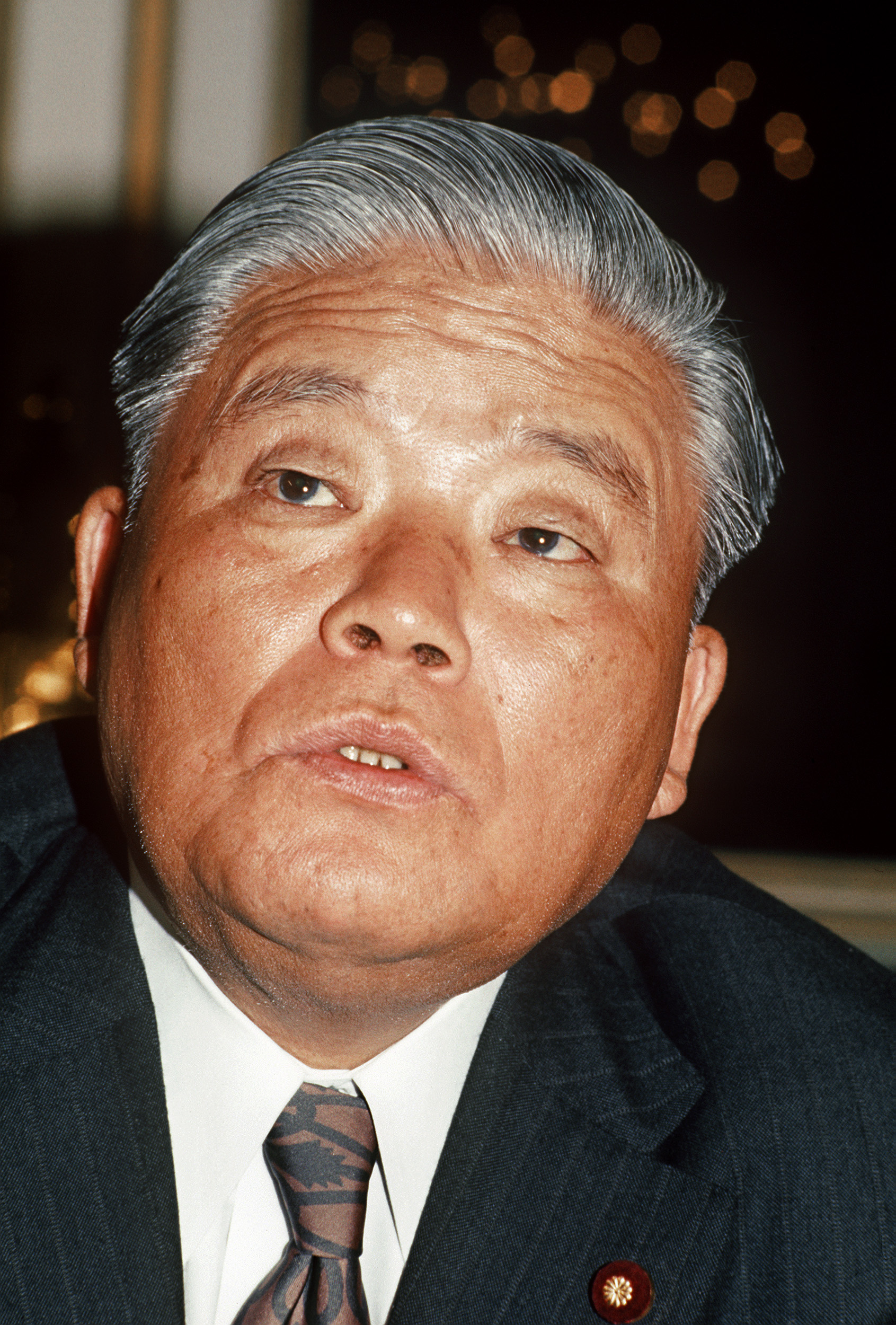 Masayoshi Ohira served as the 43rd Prime Minister of Japan starting in 1978. He later died of a heart attack while in office in 1980.

Masayoshi Ohira promoted the establishment of diplomatic relations between China and Japan during his term of office. He accompanied then-Prime Minister Kakuei Tanaka on a visit China as his Minister of Foreign Affairs in 1972. Ohira was said to be critical in helping push forward the normalizing of Sino-Japanese post-war diplomatic relations. In 1974, Masayoshi Ohira visited China again to sign the first China-Japan Trade Agreement as the Foreign Minister on behalf of the Japanese Government.

On December 5, 1979, now-Prime Minister Masayoshi Ohira and his wife were invited to China once again, marking his 3rd trip to China. However, this trip marked the first time a Japanese prime minister was able to step on Chinese soil after the normalization of diplomatic relations. 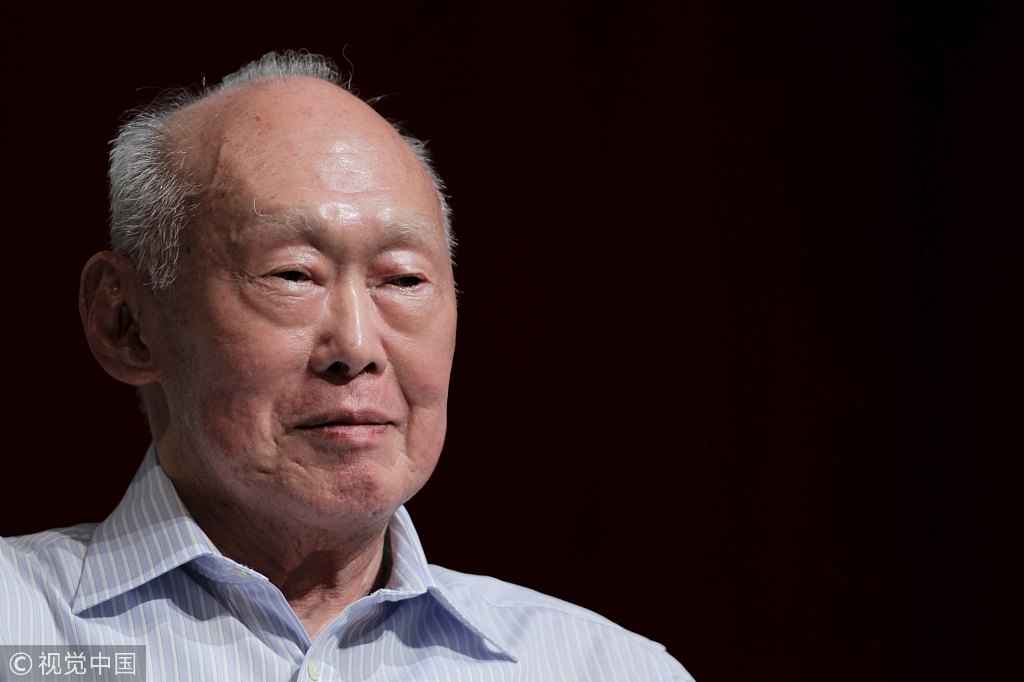 Lee Kuan Yew was the first post-colonial Prime Minister of Singapore. His connections to China can be traced back to his great-grandfather, Lee Bok Boon, who emigrated from Dabu County, Guangdong Province, to Singapore in 1863.

In 1978, then-Chinese leader Deng Xiaoping travelled to Singapore to discuss with Lee Kuan Yew ways of moving forward with national reform. It's said that his time in Singapore reaffirmed Deng's resolution to press ahead with his plans for reform and opening-up.

In the 1990s following his retirement from office, Lee Kuan Yew continued to maintain economic links with China, helping promote an eco-economic model to Chinese authorities, while also acting as a liaison for economic negotiations between the two sides. 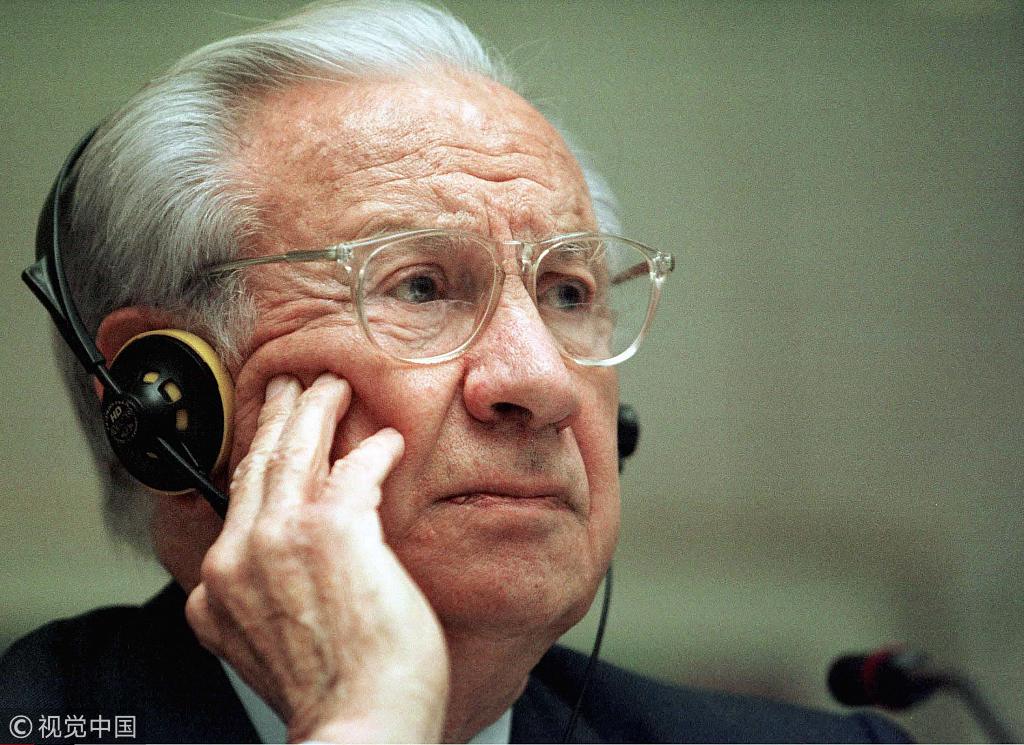 Juan Antonio Samaranch is the former President of the International Olympic Committee. He is widely recognized in China as helping promote China as a global leader in the Olympic movement.

In 1979, then IOC member Juan Antonio Samaranch advocated for Chinese recognition as an Olympic nation. In 1984, Samaranch was given the honor of awarding China's first-ever Olympic gold medal at the Games in Los Angeles. Just before his departure as IOC chief in 2001, Samaranch had the honor of announcing China as the winner of the 2008 Olympic Bid.

Samaranch died in April, 2010. Before his death, he noted in an article, "I have learnt love and friendship through 29 times visiting China in the past 30 years." 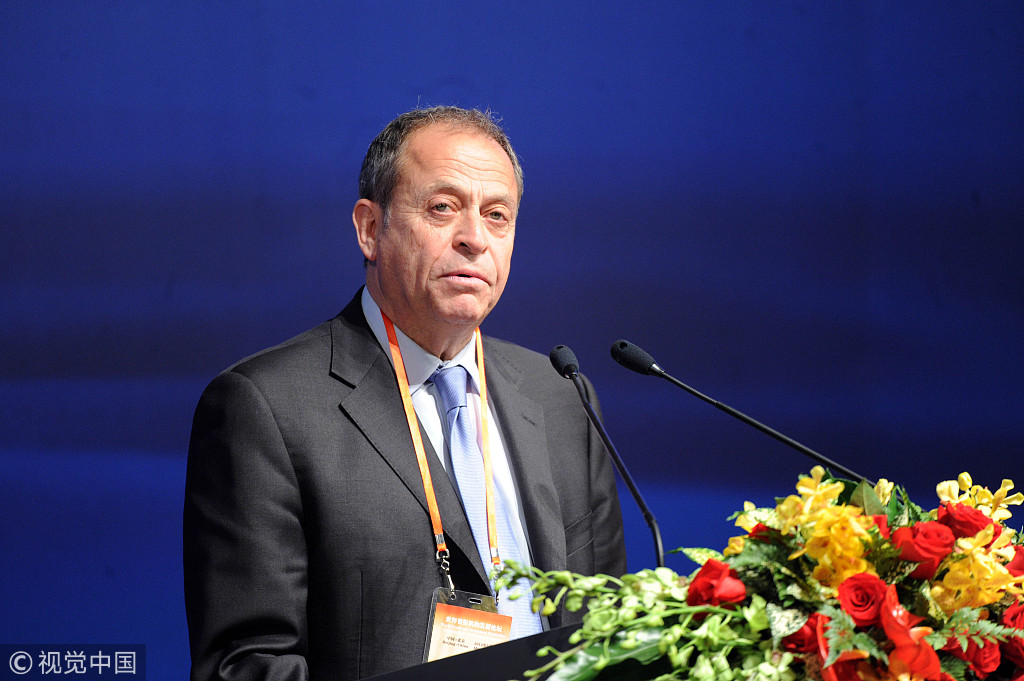 Stephen Perry, the president of 48 Group Club, delivers speech at the World Trade Promotion Summit in Beijing, May 15, 2012. (Photo: VCG)

Stephen Perry is the president of the 48 Group Club based in the UK, and also the executive director of London Export Cooperation. The 48 Group Club is a UK-based trade promotion organization. It's founding dates back to Perry's father, Jack Perry, who was known as the "Icebreaker" for his original trip to Beijing in 1953 to establish UK business ties with China.

Following the lead of his late-father, Stephen Perry has become the President of the 48 Group Club, having visited China more than 200 times, while witnessing the changes that reform and opening up have brought to China. Perry says he believes that "the reform and opening up" policy has paved way for China's progress. 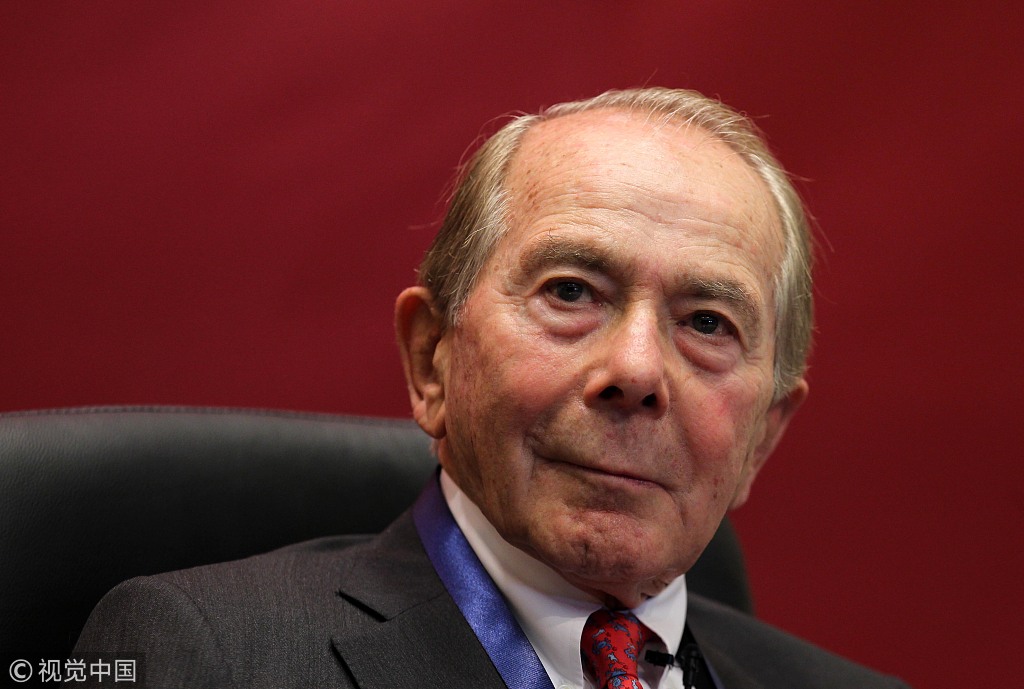 Maurice Greenberg is the Chair and Chief Executive of CV Starr & Co Inc. and former head of insurance giant AIG. He is considered by many a legend of global finance.

He has been keeping in close contact with Chinese political, business and economic leaders for decades, and is credited with helping open up the insurance market in China.

In 1992, Greenberg gained headlines for purchasing a Chinese cultural relic looted by foreign forces from the Old Summer Palace in 1850 and returning it to China.

Greenberg is considered by many to be one of the most dedicated and knowledgeable foreign China-watchers in the world. 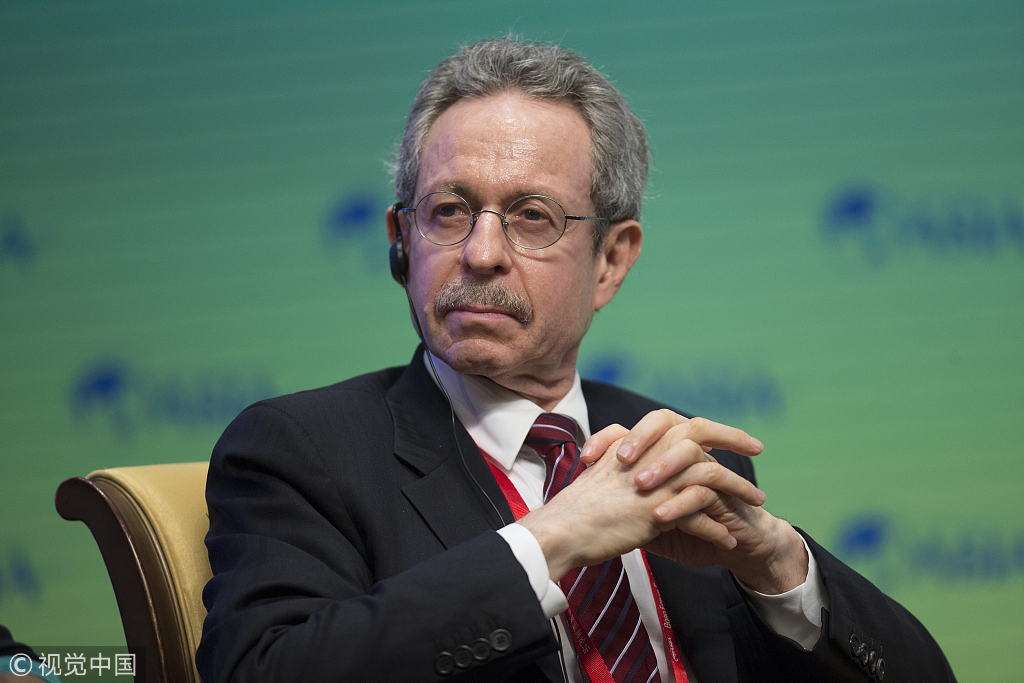 Robert Kuhun is a well-known international investment banker. He is closely linked to China as an advisor to the Chinese government in various sectors, including the media, technology, foreign affairs and other areas of key interest for the government. He is also dedicated to telling the world about today's China.

He has published two books about China's progress. His first "He has changed China: Jiang Zemin," was followed by "A Great Transformation of Human Society: The Past 30 Years of China." Kuhun and numerous senior Chinese officials have co-authored articles discussing China's political reforms.