CHINA Story behind the 'magic artifact' for safer smoking of pork

Story behind the 'magic artifact' for safer smoking of pork

Larou, or cured pork, is a Chinese specialty and a Spring Festival staple. But the making of it can sometimes be hazardous and even disastrous.

Fire resulting from the making of this foodstuff occasionally breaks out. In past month, at least six larou-related fires were reported.

On November 25, 2018, villager Yu Debing's home was nearly engulfed in Hefeng county, the Enshi Tujia and Miao Autonomous Prefecture, Central China's Hubei Province. Despite the efforts to put out the fire, it burnt down a building, leaving two pigs dead and half store of his grain destroyed.

Fire fighters determined that a piece of pork belly the farmer had hung above his cooking stove fell down and triggered the fire.

Each year, dozens of families in the Wuling mountainous region suffered from fire damage due to smoking pork, said Lü Dewen, a sociology professor from Wuhan University who is doing field research in Enshi. 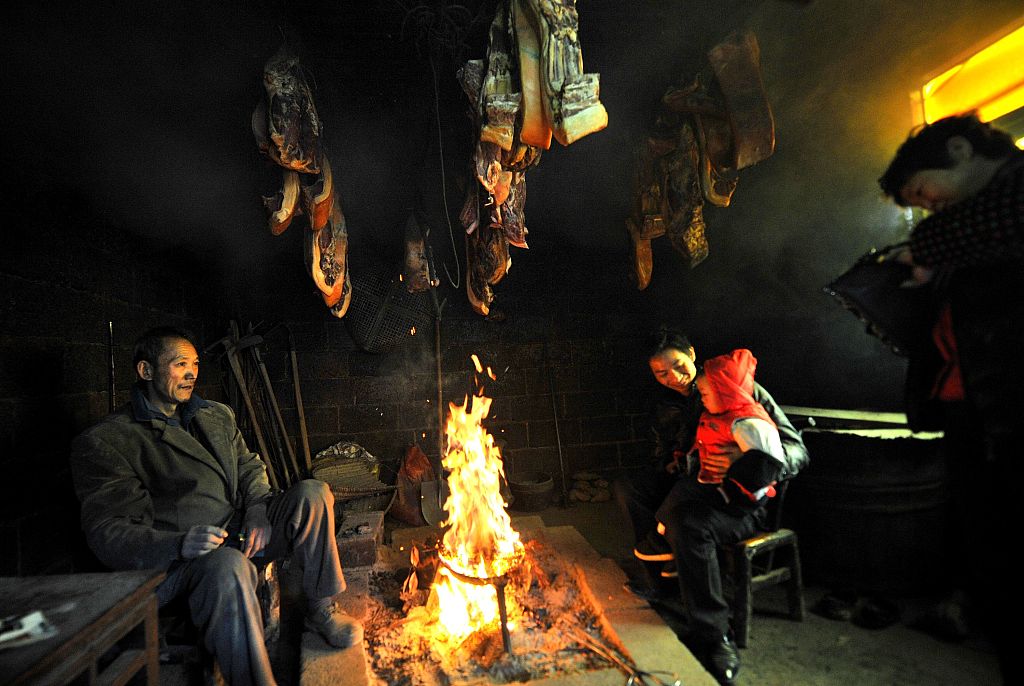 Villagers in Xuan'en, Centrial China's Hubei Province, get warm beside a stove on December 4, 2012. (Photo: VCG)

He believes fire prevention is a key test for local governance, according to an article he recently published on the WeChat account of Xuexi Xiaozu, which is operated by the overseas edition of the People's Daily.

The local authorities have tried some measures. In a village that was reconstructed after a destructive fire, the local government spent 20 million yuan ($2.9 million) on installing modern fire alarm devices in every household.

However, the solution is not only expensive but also limited in efficiency, which makes it unsuitable for other villages, Lü found.

After repeated visits and interviews, local law enforcement and judicial officials found an invention by a farmer and developed it into a tool that can prevent pork from falling and remove the fire hazard.

The tool resembling a large steel basket with small grids only costs about 200 yuan and can be easily installed.

The net can not only stop pork from dropping to the stove, but also is a container for other foodstuff that needs to be smoked. With it, farmers no longer need to stay around the stove overnight to watch for accidents.

Being pragmatic and popular, the tool was dubbed as "magic artifact" for roasting larou. And the officials in Enshi are preparing to promote it in other villages.

"Let the wisdom of the masses become an inexhaustible source of innovation in social governance,"  President Xi Jinping said in a speech delivered at the central conference on political and legal work held in Beijing on January 15 and 16.

No matter how advanced the society and technology is, the masses are always the firm foundation for the law enforcement and judicial workers to lean on, Lü said.