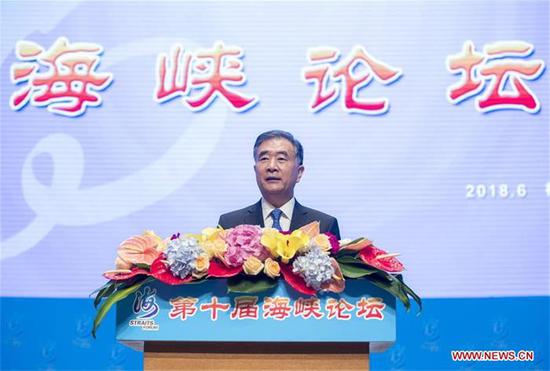 Wang Yang, China's top political adviser, emphasized on Wednesday the mainland's commitment to expanding economic and cultural exchanges and cooperation across the Taiwan Straits despite obstacles put in place during the past two years.

"The peaceful development of cross-Straits relations has met with great obstacles since 2016," Wang, chairman of the National Committee of the Chinese People's Political Consultative Conference, said at the 10th Straits Forum held in Xiamen, Fujian Province, on Wednesday.

However, he added that with deeper cross-Straits exchanges, a community of shared future on both sides of the Straits has increasingly become a vivid reality.

He said that the Chinese mainland and Taiwan share close economic ties, and the strong driving force for peaceful development is to deepen economic cooperation and integration.

In February, the central government rolled out 31 measures aimed at ensuring that people from Taiwan enjoy the same treatment as mainland people when they pursue studies, start businesses, seek jobs or live on the mainland.

The mainland and Taiwan have achieved peaceful and sound development of their relationship since 2008 based on sticking to the 1992 Consensus that embodies the one-China principle and opposes "Taiwan independence". But the relationship changed since May 20, 2016, when the Democratic Progressive Party rejected the 1992 Consensus.

Wang reiterated that recognizing the 1992 Consensus and that both sides of the Straits belong to one China is the political foundation for cross-Straits dialogue.

"Recognizing it, no political party or group in Taiwan will have any difficulty conducting exchanges with the mainland," he said.

"The separatist activity is certain to meet with the resolute opposition of the Chinese people. We have the resolve, the confidence and the ability to defeat separatist attempts for 'Taiwan independence' in any form," he said.

Hau Lung-bin, vice-chairman of the Kuomintang party, said that although the current situation across the Straits is turbulent, exchanges between the two sides should be expanded.

"Either grassroots communications like the Straits Forum or the favorable policies the mainland issued for Taiwan residents is of the correct direction that leads to better exchanges," he said.

Yok Mu-ming, chairman of the New Party on the island, said, "I have joined the forum for 10 years, and I have seen the great improvement the mainland has achieved in these years. The forum is an important platform for the grassroots from both sides to know each other."

The Straits Forum is an annual gathering held on the Chinese mainland aimed at enhancing people-to-people interaction, economic exchanges and cultural integration across the Straits. This is the 10th year of the event, which has been running annually since 2009.

"The forum is not just a good platform to share business, but also my 'matchmaker' who led me to a cross-Straits marriage," said Tseng Kuan-ying, 30, a Taiwan resident who runs a tea factory in Zhangzhou, Fujian.

"In 2012, I attended the fourth forum. When we were sharing our ideas on e-commerce in a discussion section, I met my wife, who is from Fu­jian. We were both interested in online sales," he said.

"Then we created our online tea brand together in 2015, and in the same year we got married. The business goes well. This year we had a son," he added.