Stranded foreign teachers return to China after months of uncertainty 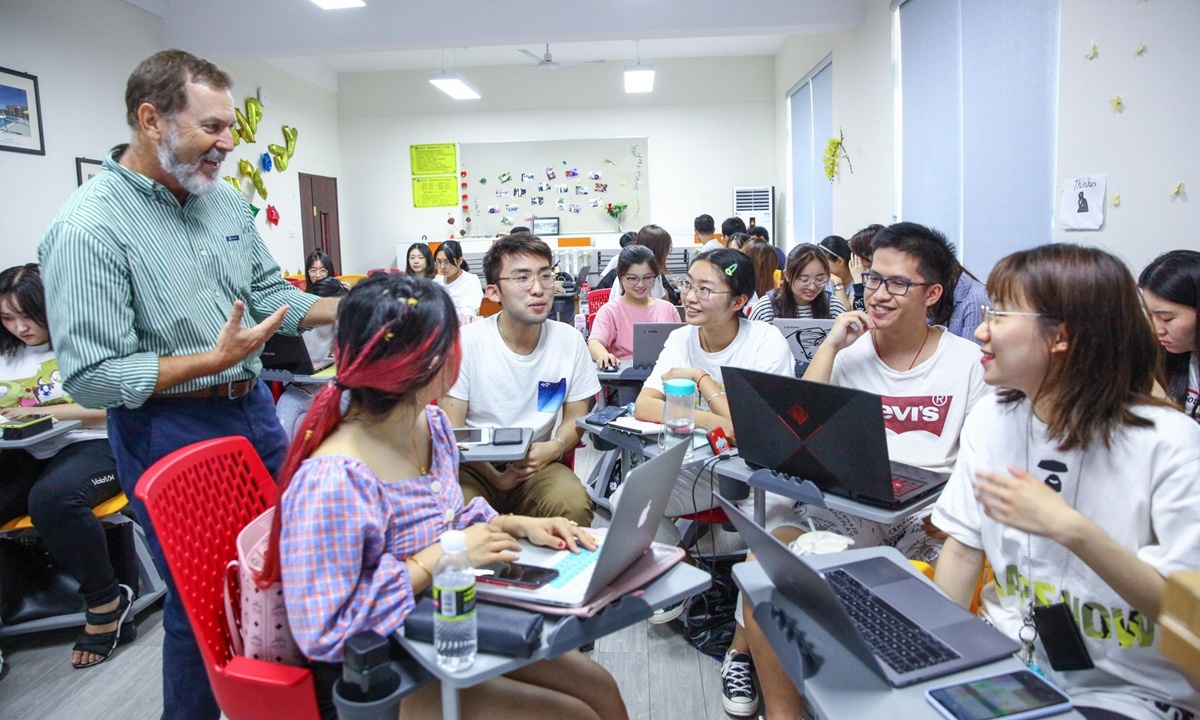 A foreign teacher communicates with his students in a school in South China's Hainan Province. (File photo: VCG)

Jennifer Marquardt would have never expected that it would take such a long time to return to China where she has lived for the past eight years, following her departure from China for winter holidays in late December 2019.

Working as a teacher in the College of Liberal Arts in Wenzhou-Kean University, a Chinese-American jointly established higher education institution based in Wenzhou, East China's Zhejiang Province, like others, the 39-year-old American national, Marquardt, felt mostly concerned for her friends back in China as the country imposed a strict lockdown in Wuhan, Central China's Hubei Province, on January 23 to prevent the spread of COVID-19.

Marquardt couldn't believe the situation was about to become even worse in the US when it later became known as a pandemic. "It was a confusing time; we didn't have much information about the virus," Marquardt told the Global Times. "A lot of people didn't understand the virus as a threat [in the US]."

What made her more frustrated was that her parents, who actually have a medical background, were "hesitant" to make significant lifestyle changes such as wearing face masks and sanitizing objects brought into the house from outside. Luckily for the family, Marquardt's persistence in asking them to stay at home as much as possible eventually led to some changes in behavior.

Marquardt's colleague, James Yee, a lecturer teaching in the computer science department, admitted the last eight months have been hard due to movement restrictions and strict health measures.

"I thought health conditions would improve so that classes could resume in person for the second half of the term, but, by April, there was a total closure of travel into China," Yee told the Global Times. On March 28, China temporarily suspended entry for foreign nationals with valid Chinese visas or residence permits in order to reduce the spread of the coronavirus.

Many foreign teachers — like Marquardt and Yee — found themselves "stranded" in their home countries as well as holiday destinations due to entry restrictions and suspended international flights brought about by the coronavirus. The subsequent pandemic has resulted in most schools around the world shutting down, meaning that teachers and students have been forced to move their lessons online.

For some teachers, the transition from offline to online learning wasn't very smooth at the beginning. Yee was faced with many challenges as he often teaches hands-on classes in the school's laboratories.

Marquardt was quite optimistic about the changes as she hadn't taught in such a way before. However, there were a lot of "extra requirements and not much flexibility," which was "frustrating," she said.

Marquardt's teaching style means that she prefers her students are proactive in giving her answers to questions, rather than her just giving answers to them directly. Unfortunately, it's much harder to teach in this way while online. It's also hard to require students to be present during live sessions due to some scheduling issues, and teachers have to deliver lectures and arrange multiple different kinds of assessment including written, spoken work and interactive assignments.

For 38-year-old American national Bree Joiner, a language arts teacher working in an international school in Shanghai, internet connectivity is one of the biggest challenges. As she lives with her parents, sometimes the family's internet has five people — including her father, husband and two children — running Zoom at the same time.

"It slows the internet down a lot," Joiner told the Global Times.

As a travel lover, Yee has visited many places around the world. However, after the worldwide "shutdown" following the pandemic, Yee indeed felt bad. "I felt isolated, trapped and did not enjoy myself," Yee said, as he was very cautious when outside his home.

After he was allowed to submit his return visa to China in June, Yee applied immediately, but the process was delayed because the embassy offices in the US were closed. It took some time to communicate with the embassies via email before Yee eventually received his entry visa to China three months later. He can now return to his work place in Wenzhou after taking the appropriate COVID-19 tests, buying a return flight ticket and undergoing two weeks of quarantine upon arrival in China and another 7-days off campus.

Joiner was also very lucky that her school helped her prepare the relevant documents — including proof of employment, work permits and normal paperwork — to apply for the visa. "The whole process took about two weeks," Joiner said, adding that most of the paper work that needs to be done has been completed by her school.

Both are among the 67,100 foreign teachers working in China. Despite waiting "outside" for months, Marquardt cannot wait to head back and see her friends and dog, and looks forward to getting back to hiking in China upon her return on September 28. "That is the life I've chosen and built for myself. I really miss it."